Lawyer who wants to ban Black pastors no stranger to controversy

By Bill Rankin – The Atlanta Journal-Constitution

BRUNSWICK – The lawyer whose request to bar Black pastors engulfed a murder trial with turmoil both inside and outside the Glynn County courthouse is known for saying the unexpected.

But Kevin Gough’s repeated, inflammatory comments during the trial of three men accused of murder in the death of Ahmaud Arbery brought condemnation from onlookers in this coastal community and from legal commentators and civil rights activists nationwide.

Gough, 59, represents William “Roddie” Bryan, who is on trial with Travis McMichael and his father, Greg McMichael.

The maelstrom began Nov. 11, a day after the Rev. Al Sharpton, a well-known civil rights activist from New York, sat in court with Arbery’s mother and father and when Gough called Sharpton’s presence “intimidating” to jurors. He also said, “We don’t want any more Black pastors coming in here.”

In direct response, Sharpton called for “100 or more” pastors to join him outside of the courthouse for a prayer vigil in support of the Arbery family. The call drew a crowd of about 750 demonstrators to the courthouse steps on Thursday.

“Well, if you thought one was enough, look at what you brought now,” Sharpton said while addressing the crowd.

This past Monday, when the Rev. Jesse Jackson sat with the Arbery family, Gough asked that the civil rights leader watch the proceedings on a livestream in an overflow room next door. “There is no reason why these prominent icons of the civil rights movement need to be here,” Gough said. 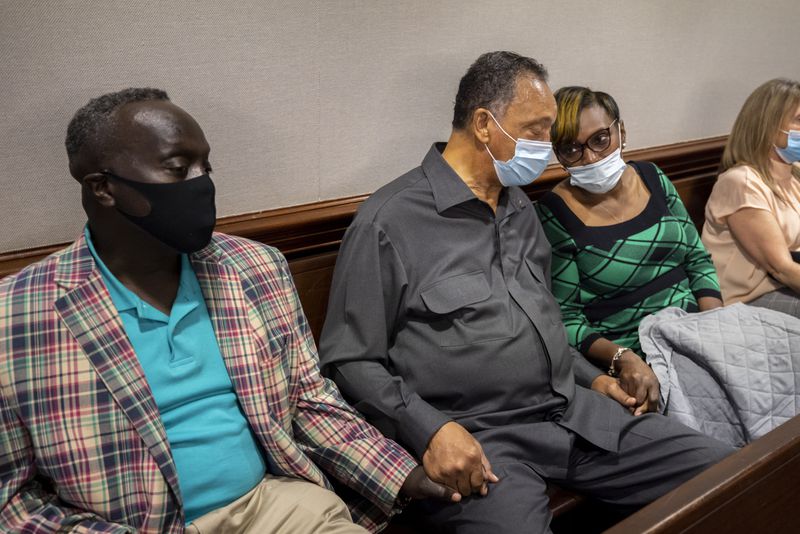 Even Jason Sheffield, an attorney representing Travis McMichael and who sits at the same defense table, called Gough’s comments “asinine and ridiculous.”

In 2016, Gough became the state’s first circuit public defender to be fired by the agency’s director. Among the complaints: Gough failed to investigate a sexual harassment complaint lodged by a member of his staff against a coworker and he also engaged in harassment of an employee. Gough went on a well-publicized hunger strike after his dismissal.

Gough, who is from New York, has served on the Glynn County Board of Elections and chaired the county’s Republican Party. He has been active in politics and endorsed candidates in local elections.

That includes his backing this year of the Rev. John Davis Perry II, who ran unsuccessfully for mayor. Perry, the senior pastor of the Mount Sinai Missionary Baptist Church in Brunswick, is the former president of the NAACP’s Brunswick chapter.

Despite Gough’s endorsement, Perry said, “I was appalled with the statement that he made regarding members of the faith being allowed into the court.” For that reason, Perry said he stood with other leaders of the local faith community to condemn the lawyer’s comments.

“We’re accustomed to Kevin Gough being a person who is full of antics,” Perry said. “But this antic went too far and could not go unaddressed.”

In court, the folksy Gough routinely includes “in all due respect” and “be that as it may” when arguing a point or addressing a witness. Early on, he brought quizzical looks from prospective jurors when he asked who they would want to give their eulogy if they were “struck by a meteorite” on the way to court.

When making renewed arguments to remove pastors from court, Gough acknowledged his cellphone has “blown up” with messages.

“I suspect I’ll be getting, continuing to get love letters and messages for days to come,” he told Walmsley. “But be that as it may, your honor, we’re asking the court to take stronger steps to ensure the right of the defendants to a fair trial.”

On Friday, the day after hundreds of demonstrators congregated outside the courthouse, Gough again argued unsuccessfully for a mistrial.

The embattled attorney likened the demonstrations to “a public lynching” and under the influence of a “woke mob.”

“(Just because) they haven’t put a podium up outside with a hangman’s noose on it doesn’t mean that this isn’t a trial, despite the best efforts of the court. This is a trial that’s been infected by mob violence of a woke left mob.”

Lead prosecutor Linda Dunikoski countered by calling Gough “a brilliant lawyer” who “got the response he wanted” outside the courthouse on Thursday.

“Of all the things I’ve been called all around the world the last month, I don’t think brilliant was any of them,” Gough shot back. “But let’s, let’s take this up. … The motion was legitimate.”