Griffin opened up in a social media post on Wednesday following her lung cancer diagnosis, declaring that after a year of sobriety: “I now know I can do this and anything I want without those devil pills.”

Kathy Griffin shared an update on her condition after announcing that she had lung cancer and would undergo surgery on Monday, saying that while she’s OK, the post-surgery experience has been more than she expected.

“To be honest, this cancer surgery was a little more than I had anticipated. Tonight will be my first night without any narcotic painkillers. Hello Tylenol, my new best friend!” Griffin wrote in an Instagram post shared on Wednesday.

On Monday, Griffin posted that the “doctors are very optimistic as it is stage one and contained to my left lung” before saying that she may not require chemotherapy or radiation treatments if “all goes well.”

In a message posted to Griffin’s social media just a day after her surgery, she expressed gratefulness for the public support she had received. “Wow! I’m so grateful for all the love you guys are sending me. Surgery went well yesterday. Phew. I was very nervous about opening up on @Nightline re my suicidal ideations and my prescription pill addiction.”

Following her previous posts, Griffin also wrote on Wednesday about her overall health, opening up more about her last hospital stay, which had been proceeded by a suicide attempt.

“The last time I was in a hospital was in June 2020 when I tried to take my own life and overdosed on prescription pills,” she wrote. “With over a year clean and drug free, I now know I can do this and anything I want without those devil pills. Y’know what? I fear drugs and addiction more than I fear cancer. So, I think I’ll be ok.” 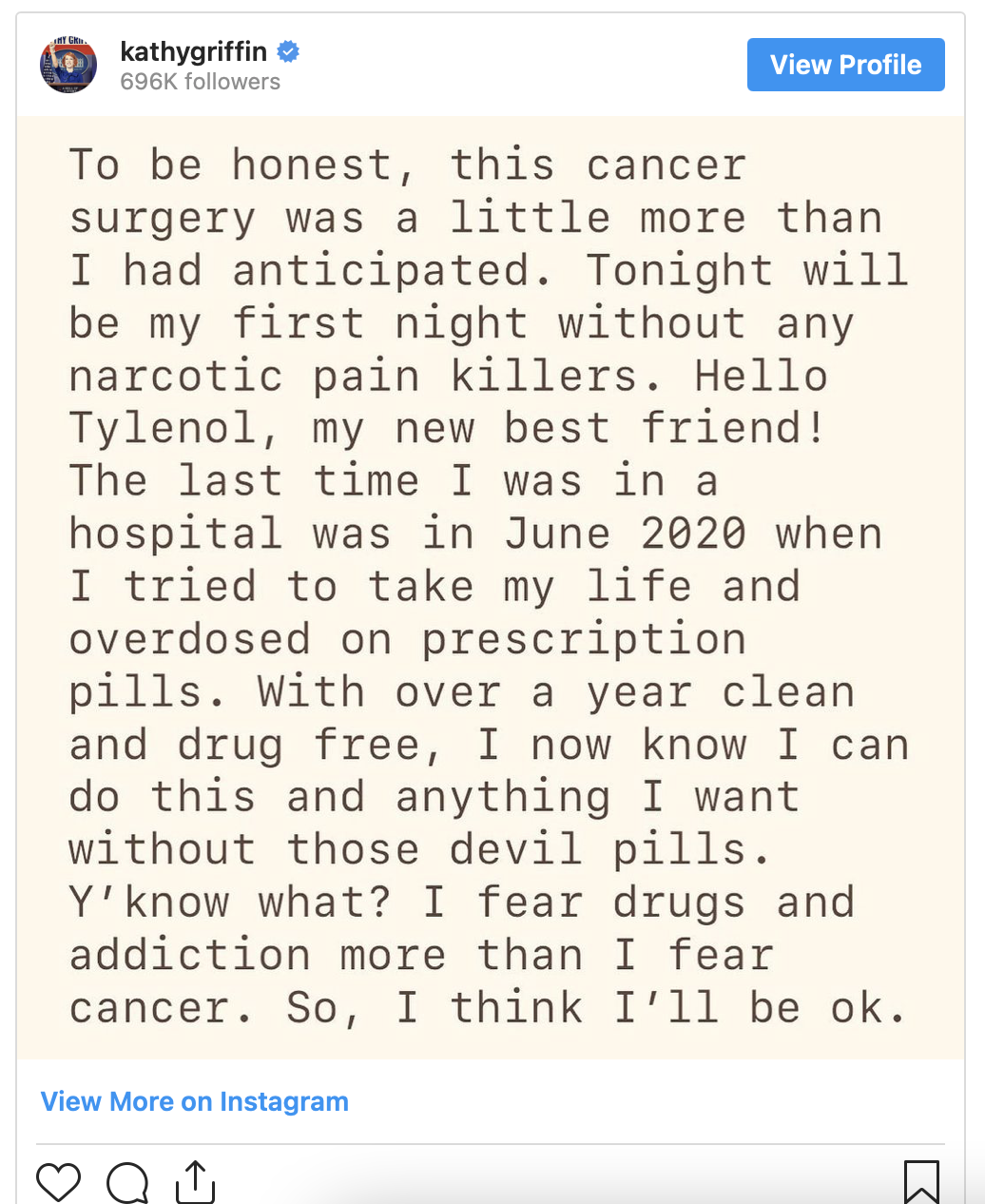 On Monday, following her surgery announcement, Griffin expounded on her mental health over the last year in an interview with Nightline. During the conversation, she spoke about her experiences with addiction and her suicide attempt, telling co-anchor Juju Chang that “it became almost an obsessive thought.”

“I started thinking about suicide more and more as I get into the pill addiction,” Griffin told Chang. “And it became almost an obsessive thought. I started really convincing myself it was a good decision.”

The actress and comedian said that at that point, she had written a note and “got my living revocable trust in order.” During the interview, the Emmy winner also reiterated what she had shared in her Monday Instagram post, noting that her pill addiction had gotten worse following a 2017 incident in which Griffin was snapped posing with a bloodied replica of President Donald Trump’s decapitated head. “Prior to then, I’m going to say I was, like, dallying with a pill addiction in a way that wasn’t good. But then, after that happened, I just thought, ‘Who cares?’” she said.