The girl was 16 when Christopher Belter raped her, according to court documents.

He was a teenager, too, a student at an elite private boys school whose family’s western New York home was known as a party house where teens gathered to consume liquor, marijuana and Adderall.

It was August 2018, and the girl, identified in court filings as M.M., was at Belter’s house to spend the night with his sister before going to Chicago the next day.

He asked her into his room, and then threw her onto the bed, pulled off her clothes and told her to stop being such a baby, according to court documents. At a hearing this summer, she described focusing her attention on the leaves of a plant in the room as the attack continued. 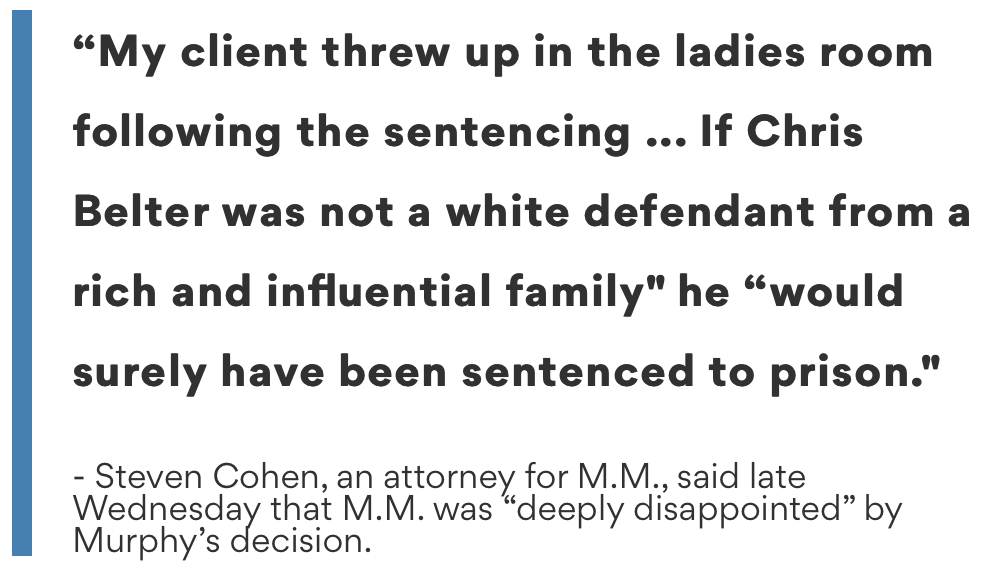 This week, Belter, 20, was sentenced in the assault on M.M. and in sexual attacks on three other teenage girls. Facing up to eight years in prison, he was instead given eight years’ probation by a judge who said he had “agonized” over the decision. 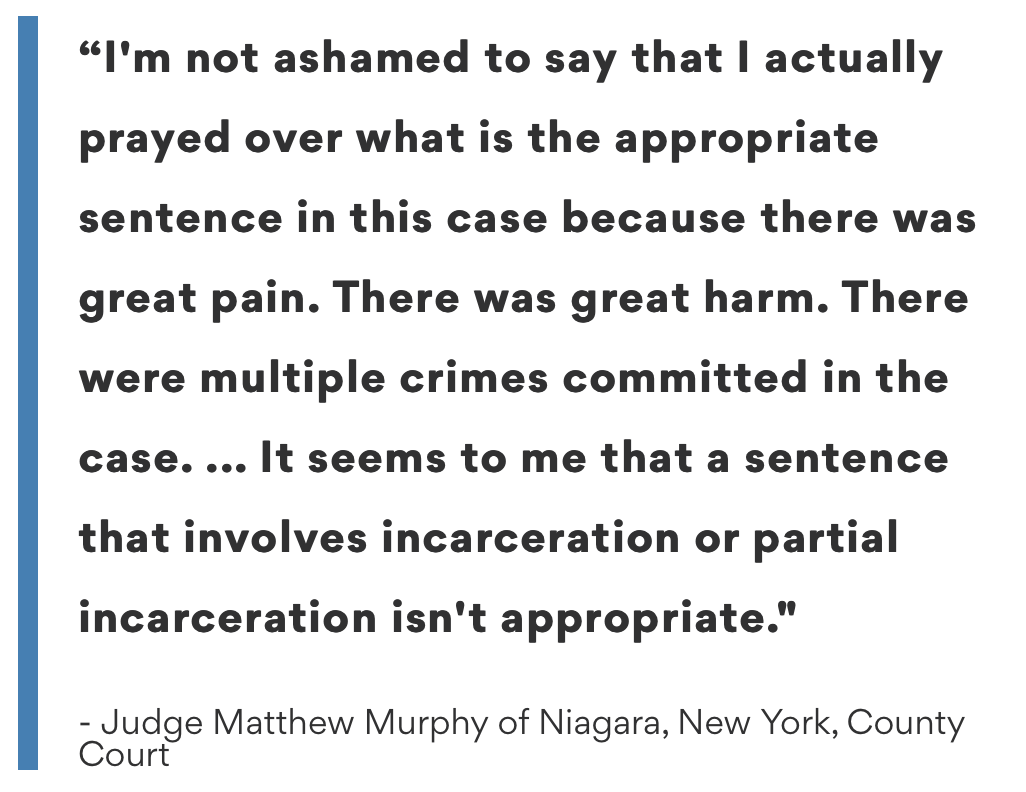 “I’m not ashamed to say that I actually prayed over what is the appropriate sentence in this case because there was great pain,” Judge Matthew Murphy of Niagara, New York, County Court, said at Belter’s sentencing Tuesday, according to WKBW, a local television station. “There was great harm. There were multiple crimes committed in the case.”

Still, the judge continued, “It seems to me that a sentence that involves incarceration or partial incarceration isn’t appropriate.” He told Belter, who must register as a sex offender, the probation would be “like a sword hanging” over his head for the next eight years. He offered no further explanation for why the sentence did not include prison time.

“My client threw up in the ladies room following the sentencing,” Cohen said in an email, adding that “if Chris Belter was not a white defendant from a rich and influential family” he “would surely have been sentenced to prison.”

Belter’s father, who is also named Christopher and is divorced from Belter’s mother, is a senior partner at Goldberg Segalla, a large law firm where, according to The American Lawyer magazine, some partners earn up to $1 million a year. (He, Belter’s mother and her current husband, Gary Sullo, are named as defendants in a lawsuit filed by M.M.’s family.)

“The truth of what went on and what he did to his victims is far more egregious than the charges he pleaded to,” Cohen said.

Contacted by email, Belter’s attorney, Barry Covert, declined to comment. At the sentencing, he said his client was “tremendously remorseful,” according to WKBW.

Belter sought to communicate a sense of remorse to his victims at the sentencing, WKBW reported, saying that “through treatment and reflection, I’ve come to feel deep shame and regret for my actions” and that “none of you deserved to be in this situation.”

Peter Wydysh, an assistant district attorney, did not make a sentencing recommendation in court and declined to comment on Murphy’s sentence, according to The Buffalo News. The district attorney’s office did not respond to a request for comment Wednesday. 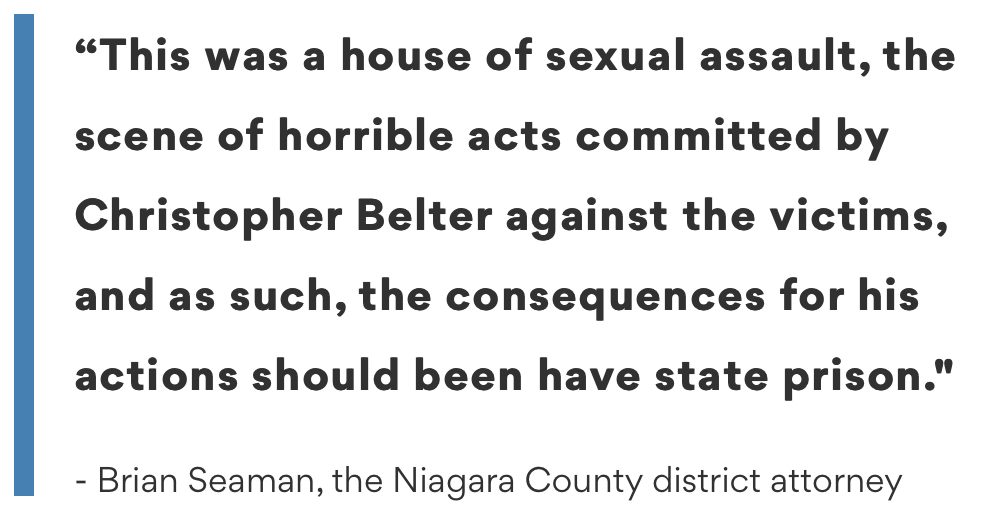 In a statement Thursday, Brian Seaman, the Niagara County district attorney, expressed frustration with the sentence, saying that the office had been “very clear that we believed a prison sentence was entirely appropriate in this case.”

“This was a house of sexual assault,” Seaman said of Belter’s home, “the scene of horrible acts committed by Christopher Belter against the victims, and as such, the consequences for his actions should been have state prison.”

Details of the crime

The attacks on M.M. and the three other girls — two 16-year-olds and a 15-year-old — occurred at Belter’s home over an 18-month period starting in February 2017, according to court documents. At the time, he was a student at Canisius High School in Buffalo, where he played rugby.

The house, which news reports describe as being in a wealthy section of Lewiston, New York, a small town about 15 minutes from Niagara Falls, was popular among those in Belter’s circle because of the loose rules governing what they could do there.

When Belter was arrested, authorities also charged his mother, Tricia Vacanti, with supplying alcohol and marijuana to teenagers at parties at the house on various occasions. Her husband, Gary Sullo, and a friend, Jessica Long, were also charged with serving minors there alcohol. All three have pleaded not guilty and are awaiting trial, court officials said.

Sullo is the chief executive of Tramec LLC, a privately held company that supplies parts for heavy duty trucks and, according to Dun & Bradstreet, has annual sales of $110 million.

After initially being accused of more serious crimes in the four attacks, the younger Belter resolved the charges by agreeing in 2019 to plead guilty to third-degree rape, attempted sexual abuse and two misdemeanors, court filings show.

A different judge gave Belter, who was 16 and 17 at the time of his crimes, an interim sentence of two years’ probation. The sentence offered him the chance, if he met its terms, of being treated as a youthful offender when his final sentence was decided — reducing, or even eliminating, any potential prison term and allowing him to avoid registering as a sex offender.

In explaining the sentence at the time, according to court records, the judge, expressed doubts about whether Belter could abide by its conditions. Her skepticism turned out to be warranted.

Among other things, the interim sentence prohibited Belter from viewing pornography, something he subsequently acknowledged doing anyway by installing software on his personal computer to flout the restriction, court records show.

Belter told a probation officer that he had been watching pornography regularly since he was 7 and that it was a “coping mechanism,” Murphy wrote in an October ruling denying him youthful offender status. He also noted in the ruling that Belter had “recently been treated with medication to lessen his libido.”

Murphy explicitly cited Belter’s violation of the pornography ban in the decision, which made the sentence handed down Tuesday especially galling to Cohen.

Murphy will turn 70, New York’s mandatory retirement age for judges, next month. A Democrat, he was first elected to the county court in 2007, according to The News, and reelected in 2017. He was Niagara County district attorney for 16 years before becoming a judge.

In denying Belter youthful offender status, Murphy cited the “moving and eloquent” victim statement M.M. made in court in August. (The News reported that at the hearing this summer, the judge ordered local news outlets not to publish Belter’s name despite it being a matter of public record and having been widely published already.)

In discussing M.M.’s statement, Murphy noted how she had compared the damage done by Belter to that caused by forest fires she had seen raging as she traveled across the country this past summer. The judge’s ruling included a verbatim portion of the statement.