Editors Picks, In The News, Technology

Riding his own rocket, Amazon and Blue Origin founder Jeff Bezosstreaked into space Tuesday on a thrilling 10-minute up-and-down flight, a high-tech joyride that sets the stage for the start of commercial passenger service later this year.

Competing head to head with fellow billionaire Richard Branson, who flew into space aboard his Virgin Galactic rocketplane July 11, Bezos blasted off with his brother Mark and two history-making passengers: 82-year-old aviation pioneer Wally Funk, the oldest person to fly in space, and Oliver Daemen, an 18-year-old Dutch student who is the youngest ever to fly in space.

Funk, who was barred from NASA’s initially all-male astronaut corps in the 1960s, finally got her chance to prove the naysayers wrong, realizing a lifelong dream.

The crew lifted off from the company’s West Texas launch site at 9:12 a.m. EDT.

Climbing straight up atop 110,000 pounds of push, the rocket rapidly accelerated as it consumed its load of supercold liquid oxygen and hydrogen propellants, pushing the passengers back in their recliner-style seats with about three times the normal force of gravity.

In a little more than two minutes, the spacecraft was shooting skyward at three times the speed of sound, dwindling to a blur more than 30 miles up. A few seconds later, at an altitude of about 45 miles, the booster’s company-designed BE-3 main engine shut down and the crew capsule was released to fly on its own.

Coasting upward along an unpowered ballistic trajectory, Bezos and his crewmates enjoyed about three minutes of weightlessness, free to unstrap and float about the cabin as it reached a high point of just above 62 miles.

That’s the internationally recognized “boundary” between the aerodynamically discernible atmosphere and space, a distinction recognized by the Fédération Aéronautique Internationale, a Switzerland-based organization that sanctions aerospace records.

Branson’s Virgin Galactic spaceplane flies slightly lower but well above the 50-mile altitude recognized as the boundary of space by NASA and the Federal Aviation Administration.

In any case, Bezos and his crewmates would have time to turn somersaults and briefly cavort in weightlessness while marveling at spectacular views of Earth’s curved horizon and the blackness of space through the capsule’s six windows, the largest ever built into a spacecraft.

“There’s actually a light that the astronauts see on their panels,” said capsule designer Gary Lai. “And one second after we separate (from the booster), that fasten seatbelt light basically goes off and they’re free to move about the cabin.”

The reusable New Shepard booster, meanwhile, headed back to Earth on its own, plunging tail first toward a landing pad two miles from the launch site. The rocket relied on deployable air brakes and steering fins to maintain its orientation before re-igniting its BE-3 engine, unfolding four hinged legs and settling to a picture-perfect landing.

Meanwhile, aboard the crew capsule, Bezos and company strapped back in while weightlessness gave way to atmospheric braking that pressed the crew back into their seats with about four times the normal force of gravity.

Lai said the transition from weightlessness to re-entry deceleration was not a sudden change and that the crew had have plenty of time to get back in their seats.

“It’s about three minutes before the astronauts get a warning to get back into their seats,” he explained in an interview prior to launch. “And at that point, they have about 30 seconds.”

He described it as a “very leisurely process.” “All they have to do is be sitting in the seat and then as the G forces come on it will naturally push them back in the seat so there is plenty of time to buckle back in,” he said. 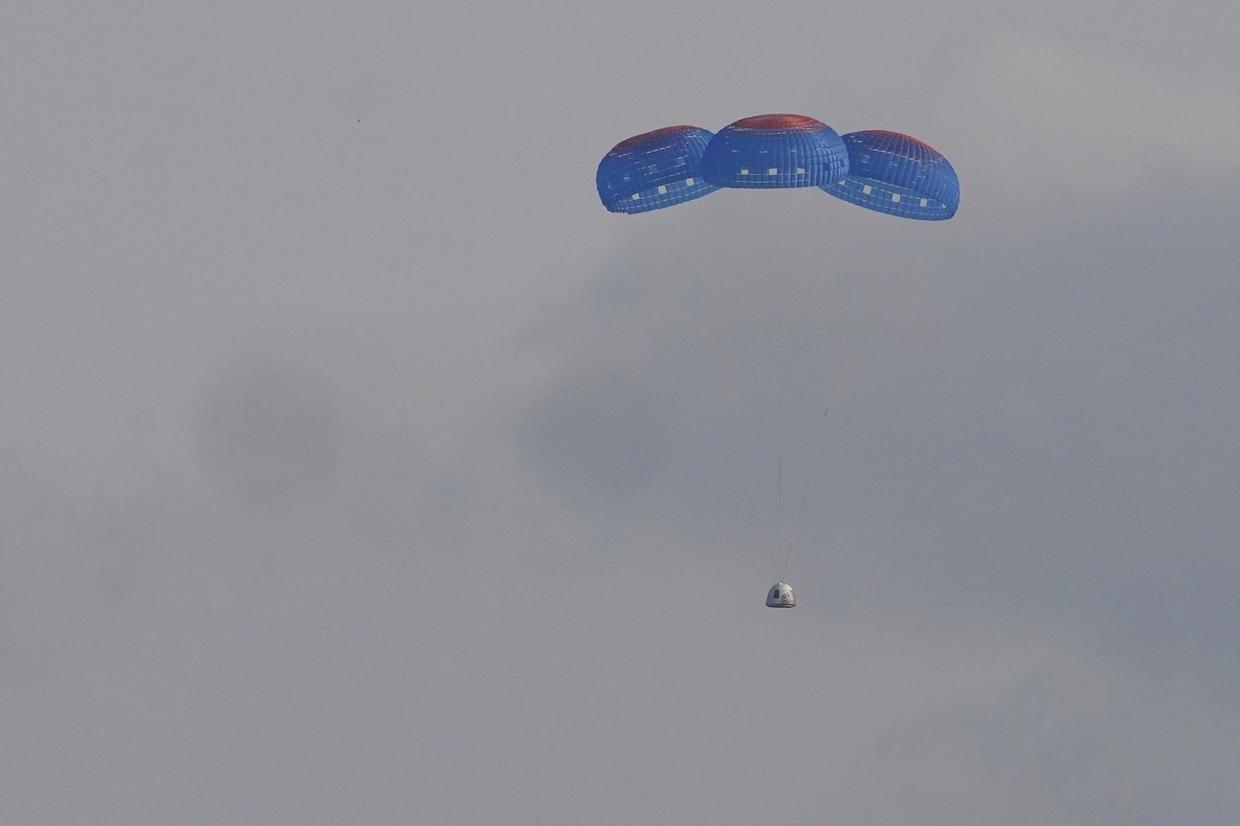 All of that apparently went well and the capsule soon was falling freely back towards Earth. At a predicted altitude of about 3,000 feet, three large parachutes unfurled and inflated, slowing the New Shepard’s descent to about 16 mph.

Then, just six feet or so off the ground, nitrogen powered thrusters fired, slowing the capsule to just 1 mph and kicking up a roiling cloud of dust as the spacecraft gently touched down at 9:22 a.m. EDT. 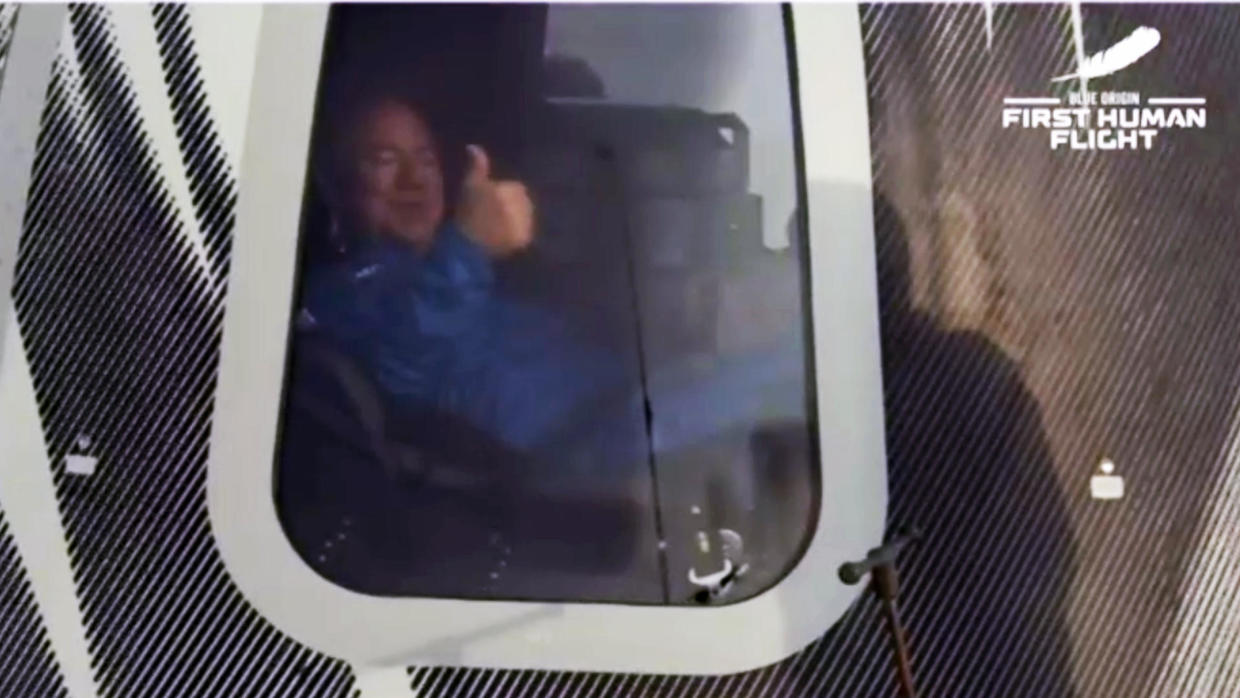 Blue Origin recovery crews converged on the capsule within minutes of touchdown to open the hatch and help the returning astronauts exit. All four emerged in obvious high spirits, smiling and hugging support personnel before heading back to prepare for a news conference and interviews.

It was the 16th successful test flight of a New Shepard spacecraft, the third for this booster and capsule, and Blue Origin’s first with passengers on board. And it all appeared to go off without a hitch. 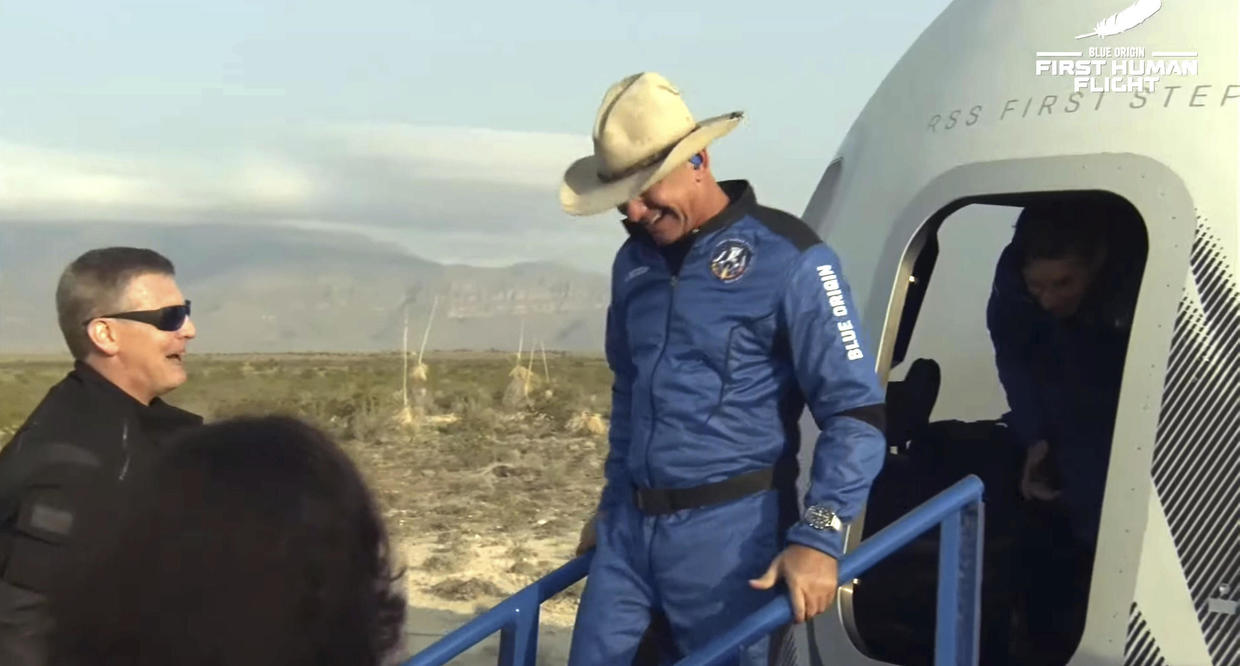 “Safety is definitely priority one,” Lai said. “We set out to create the safest human spaceflight vehicle ever designed or built or operated, and we think we have succeeded.”

Blue Origin plans to launch two more passenger flights before the end of the year, but ticket prices have not been revealed. The cost of a flight aboard Virgin Galactic’s spaceplane is believed to be around $250,000 but both companies hope the market will support economies of scale and lower prices down the road.

Blue Origin has two New Shepard rockets and capsules available for flights, one dedicated to passenger service and the other to scientific research payloads.

“We’re not done once we fly this vehicle, it’s really just the beginning,” Lai said. “We are going to ramp up operations. We’re going to have dozens and eventually hundreds and thousands of astronauts we hope fly on New Shepard. So it is just the beginning. But it is a monumental moment nevertheless.”