Cooking bacon isn’t complicated … once you study up on all the ways to cook bacon. Whether you want to master how to cook bacon in the oven, the microwave, in air fryers, or even on the grill, our Test Kitchen is here with tips and tricks so you’ll always sizzle up the perfect strips.

Prepare to pig out—you’ll want to add strips to every meal after mastering all of the best ways to cook bacon.

The 4 Best Ways to Cook Bacon

Whether you’re seeking a hands-off method for cooking bacon, you need bacon fast, or you are craving slices with some smoky flavors infused right inside, you’ll find the best way to cook bacon for your needs below.

How to Cook Bacon on the Stove

Cooking bacon on the stove, also known as pan-frying bacon, is the traditional method for many home cooks. It’s a great option to cook bacon quickly, and you’ll only need one pan.

Place bacon slices in an unheated skillet (if using an electric range, preheat the element for 2 to 4 minutes). The key element to acing this cooking strategy: Knowing exactly how long to pan-fry bacon. We suggest cooking it over medium heat 8 to 10 minutes or until your desired doneness, turning occasionally. If the bacon browns too quickly, reduce heat slightly. Drain well on paper towels.

Test Kitchen Tip: Try using a cast-iron bacon press ($18, The Home Depot) to place atop the cooking bacon. This helps the bacon cook evenly and more quickly and also minimizes shrinkage. To cut down on splattered grease when frying bacon, consider an inexpensive splatter screen ($20, Target) to cover your skillet. 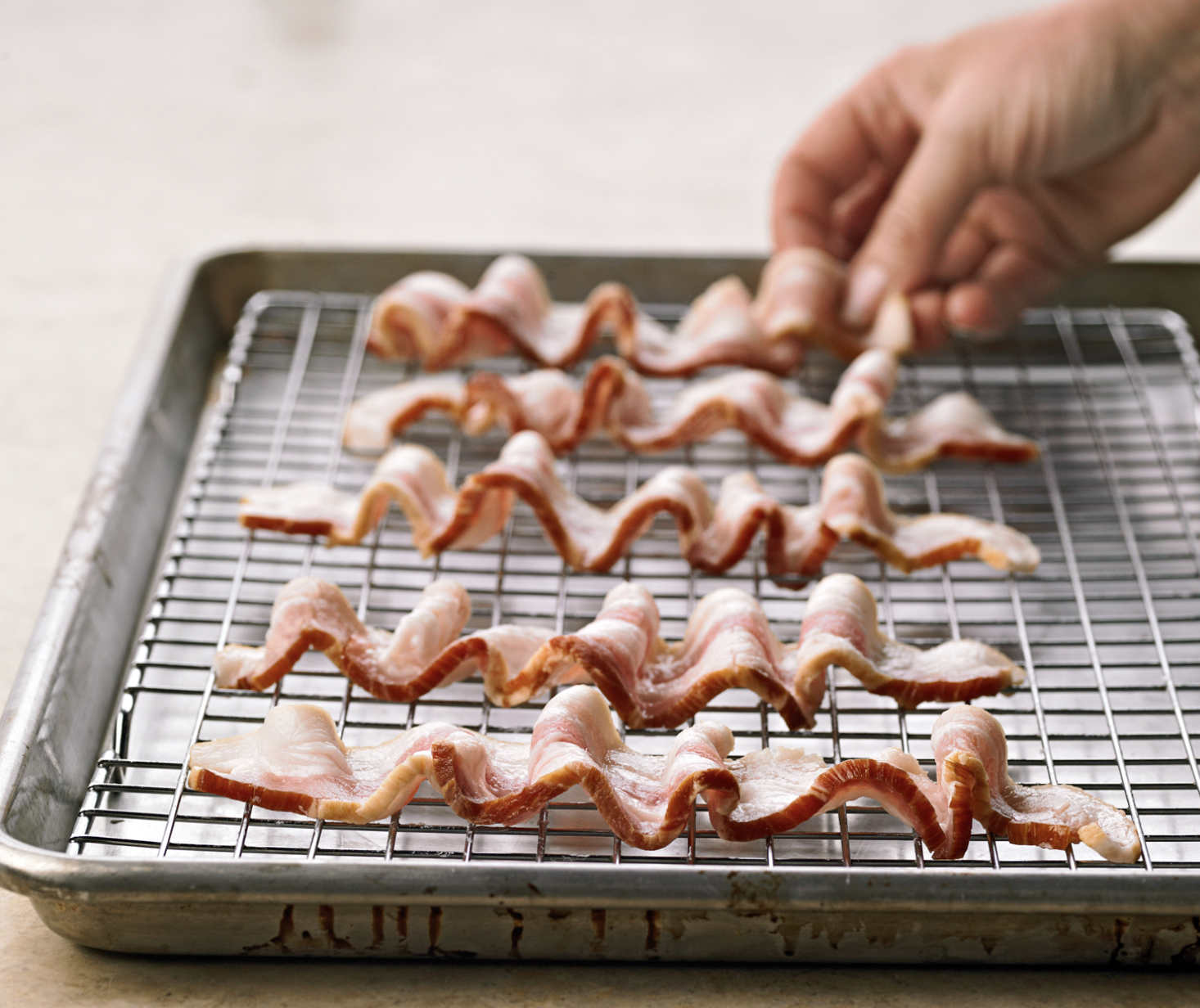 How to Cook Bacon in the Oven

Cooking bacon in the oven works well when cooking more than six strips of bacon or when you need to free up space on your stove top. Baking bacon also requires less attention during cooking, since no turning is needed.

Curious about what temp to cook bacon in the oven? We suggest fairly high heat: Preheat the oven to 400°F. Place bacon slices side by side on a rack in a foil-lined shallow baking pan with sides. Bake 18 to 21 minutes or until crisp-cooked. Drain well on paper towels.

How to Cook Bacon in the Microwave

Choose this strategy to cook bacon quickly and without heating up your kitchen. Cleanup is also a cinch.

How to Cook Bacon on the Grill

Flare-ups are a concern when cooking bacon on the grill since the slices can drip fat down onto the flames. To avoid this, we recommend cooking bacon in a cast-iron skillet ($30, Target) following the stove top instructions above. Aim for a grill temperature of 400°F; cook with the grill lid closed, opening to flip the slices partway through the cooking time.

How About Air-Fryer Bacon?

Wondering how to cook bacon in air fryers? We don’t recommend it. After testing this out for our complete guide to air fryers, we discovered foods with a higher natural fat content (including bacon) can start smoking while you’re cooking bacon. Choose one of the other four best ways to cook bacon above instead and reserve the trendy appliance for recipes it’s better suited for, like these air-fryer chicken dinners, air-fryer fish recipes, and air-fryer desserts.

How to Buy and Store Bacon

American bacon usually comes from the pork belly with streaks of fat running through it, and it is cured and smoked. For crisper bacon, buy a thinner cut. Thinner slices take less time to cook so they get crispy before any burning occurs. Take a peek at the bacon through the packaging to see the fat-to-meat ratio so you can determine the ratio you desire. You can also buy bacon from the butcher or meat counter in some markets. Tell them what you’re cooking bacon for and they can direct you to the best thickness and flavor (say, chipotle, maple, applewood-smoked, or brown sugar).

Once you open the package, keep the bacon tightly covered in the refrigerator for up to one week. Wondering how to freeze bacon? You have a few options:

Thaw any of the above in the refrigerator before using.

Now that you’re a bacon buff, you’re all set to sear up better-than-diner crispy slices to serve as part of your blue plate special, build a better BLT, or even ace our bacon desserts. Since you’re well-versed in all the best ways to cook bacon, you’ll never have to fight over the last slice—just whip up another batch.