The collaboration harkens back to a classic Chevrolet ad that name-dropped the two classic American dishes.

In the early 1970s, a career copywriter at Detroit’s Campbell Ewald ad agency combined four All-American items into an inescapably catchy commercial jingle, one that pretty much soundtracked every 70s kid’s entire childhood. James Hartzell’s “Baseball, Hot Dogs, Apple Pie, and Chevrolet,” song debuted on TV and the radio in 1974 and it made an immediate impact (and became an immediate earworm). Almost 30 years later, Car & Driver named “Baseball, Hot Dogs, Apple Pie, and Chevrolet” as the co-best car commercial of all time.

Today, Chevrolet announced that “Baseball, Hot Dogs, Apple Pie, and Chevrolet” are back on the menu this summer — and this time, they mean it literally. The Detroit-based company has partnered with chef, restaurateur, and Food Network superstar Guy Fieri to combine the apple pie and hot dog parts of the iconic commercial, and the ultra-limited edition concession will make its debut at the MLB at Field of Dreams game on Thursday, August 12.

“I’ve been a Chevy fan my whole life, since I was a little kid,” Fieri told Food & Wine. “The first hot rod I ever owned was a ’71 Chevelle, which I still have. When I was a kid, it went right up the middle: were you a Ford guy or a Chevy guy, and I was always a Chevy guy.”

Chevrolet reached out to Fieri earlier this summer, to see if he could come up with a recipe for an apple pie hot dog and — to use the appropriate metaphor — he’s the one guy who could knock this one out of the park. Almost immediately after he hung up the phone, Fieri and his team started working on the best way to bring that combination of flavors together. “It’s got to be a really good hot dog, and it’s got to be a pie crust: it can’t be phyllo dough or a biscuit,” he explained. “We’re going to treat the apple pie as more of a condiment, like a relish. Then we’ll add some bacon jam in there, and a sweet-and-savory mustard.” 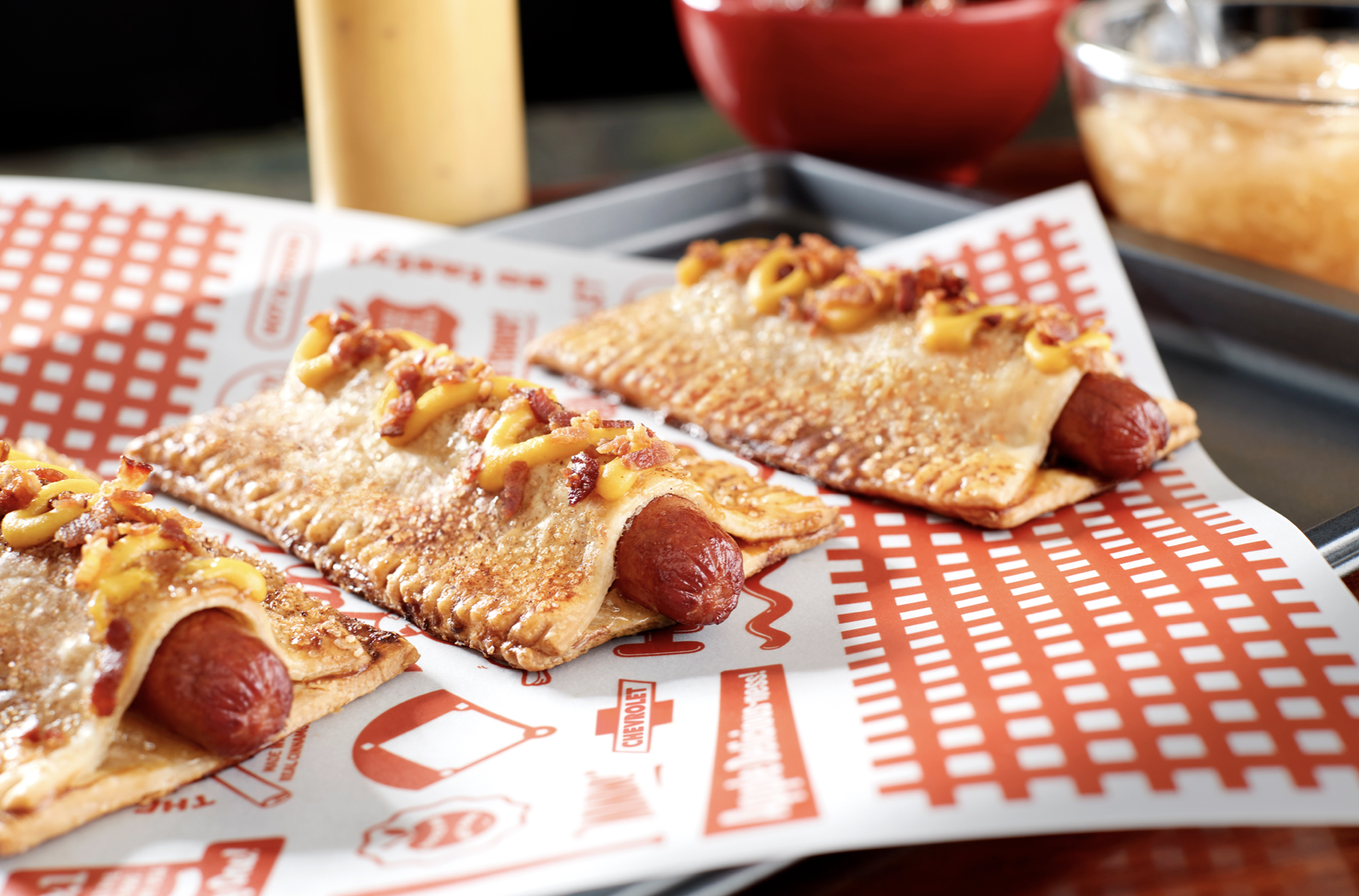 He delivered a couple of prototype apple pie hot dogs to Chevrolet, and he said it was “a long 24 hours” before they got in touch to tell him that they loved it. “I know people are going to look at this and go ‘It’s a gimmick,'” he said. “No, it’s really delicious.”

Right now, the apple pie hot dogs will only be available once, at Thursday night’s game between the Chicago White Sox and the New York Yankees, which is being played at an 8,000 seat stadium near the Field of Dreams movie site in Dyersville, Iowa. (Unfortunately, Fieri won’t be able to attend, due to his son’s 25th birthday and the already hectic filming schedule for the next season of Guy’s Grocery Games).

Before you ask, yes, Fieri is a big baseball guy too and has thrown out the first pitch for both the Oakland A’s and the Cincinnati Reds. “I got the ball to home plate, by the way,” he said. “I think my greatest MLB moment was playing in the MLB All-Star [Legends & Celebrity Softball] game in 2010, getting a single and standing on first with Bo Jackson, who was the first baseman for the other team. I’ve got Bo Jackson, sitting there holding my shirt as I’m trying to run, giving me a hard time.”

He’s also optimistic that the apple pie hot dog will be back at some point in the future. “It’s just too fun, too iconic, too memorable, and it’s got too many good things about it,” he said. “I don’t think this is gonna be our last game.”