Employees were already stirred up over opaque policies on remote work. Then a senior executive announced he’s moving to New Zealand in what some workers consider special treatment.

As Google employees around the world make plans for post-pandemic work at the tech giant, Laura de Vesine won’t be among them. For months, de Vesine, a senior site reliability engineer, went back and forth with the company over a potential relocation. Fed up with Google’s inflexible policies, she handed in her notice. Her last day is Friday.

For de Vesine, Google’s attempt to corral its employees after a year of remote work has been marked by indecision and backpedaling. Last fall, her team was told it would need to relocate to North Carolina from the company’s office in Sunnyvale, California, about 40 miles south of San Francisco. The prospect of ditching Bay Area housing prices and long commutes was a powerful draw. The move, however, came with a 15% salary cut, she said. Then in late March, the team was told it would be a 25% cut. About a month later, the team relocation plans were scrapped altogether.

“This feeling that I can’t realistically leave the Bay Area and work for Google is enough for me to have decided to leave,” de Vesine said. “It’s the fact that Google doesn’t prioritize the needs of human beings. The fact that we have lives outside of work, that people actually have families.”

Though remote work is sweeping corporate America, Google has been reluctant to let employees do it permanently, an approach Twitter and Reddit have taken. Google isn’t the only tech company wrestling with its workforce’s increasing desire for flexibility. Apple is facing its own backlash from employees, while Facebook just extended remote work options to all of its employees. But the way the search giant has handled the rollout of its plans has drawn particular scrutiny.

In May, CEO Sundar Pichai unveiled plans for a “hybrid” work environment that would require most employees to work from their offices at least three days a week beginning in September. Under the new structure, 20% of the company would work remotely. Another 20% could work from new locations. People who relocated would get salary adjustments based on the local market. The bulk of Google would pick up where it left off, working from the office. Google makes up almost all of Alphabet, a holding company that has more than 135,000 full-time employees.

As the company sorts out who will work where and how much they’ll be paid, Google employees say tension has broken out over office transfers, compensation adjustments and remote work. The competition for transfers and the prospect of pay cuts has provoked growing anger, they say. The dustup over the future of the company’s workplace policies has the potential to affect every person at the tech giant.

The rancor intensified last week, when Urs Hölzle, one of the company’s longest-tenured and most senior executives, announced plans to work remotely from New Zealand, according to an email he sent to employees that was viewed by CNET. Hölzle’s plans angered rank-and-file workers, who consider it special treatment for company leadership, while lower-level employees have had to wade through a drawn-out and uncertain application process.

A Google spokesman declined to make Hölzle available for an interview. The spokesman said Hölzle’s relocation request was submitted and approved last year, before Google’s return-to-office policies were set, but the move was delayed because of travel restrictions.

The agitation over remote work policies has provided a new source of friction for a company whose employees are already well-experienced in rebelling against leadership. Workers have protested Google’s handling of sexual misconduct, its work in China and the ousting of researchers who criticized the company’s artificial intelligence systems.

What happens at Google doesn’t necessarily stay at Google. For more than two decades, the search giant has set the tone for office culture in Silicon Valley, pioneering lavish employee perks like free food and gym service. The impact of Google’s remote work policies could ripple far and wide, as other companies look to the tech titan as a guide.

“Google plays a very key role in the industry,” said Andreea Vanacker, CEO of Sparkx5, a company that works with corporate clients to improve employee culture. “Certain organizations may be inspired by actions that Google is taking and say, ‘Oh, very interesting. We should be doing the same thing.'”

Hölzle, Google’s senior vice president of technical infrastructure, is a revered figure at the company. He was one of Google’s first 10 employees and is credited with building the tech giant’s IT foundation of servers and networks. But for some Googlers, his relocation email, which was sent on June 29 and hasn’t been previously reported, illustrated the inequities of the company’s system for deciding remote work.

“After three decades in the US, my wife and I both felt it was time to consider a new location,” Hölzle wrote. “We’ve decided to spend a year in New Zealand and see how we like it. To be clear: I am not retiring, just changing my location!” 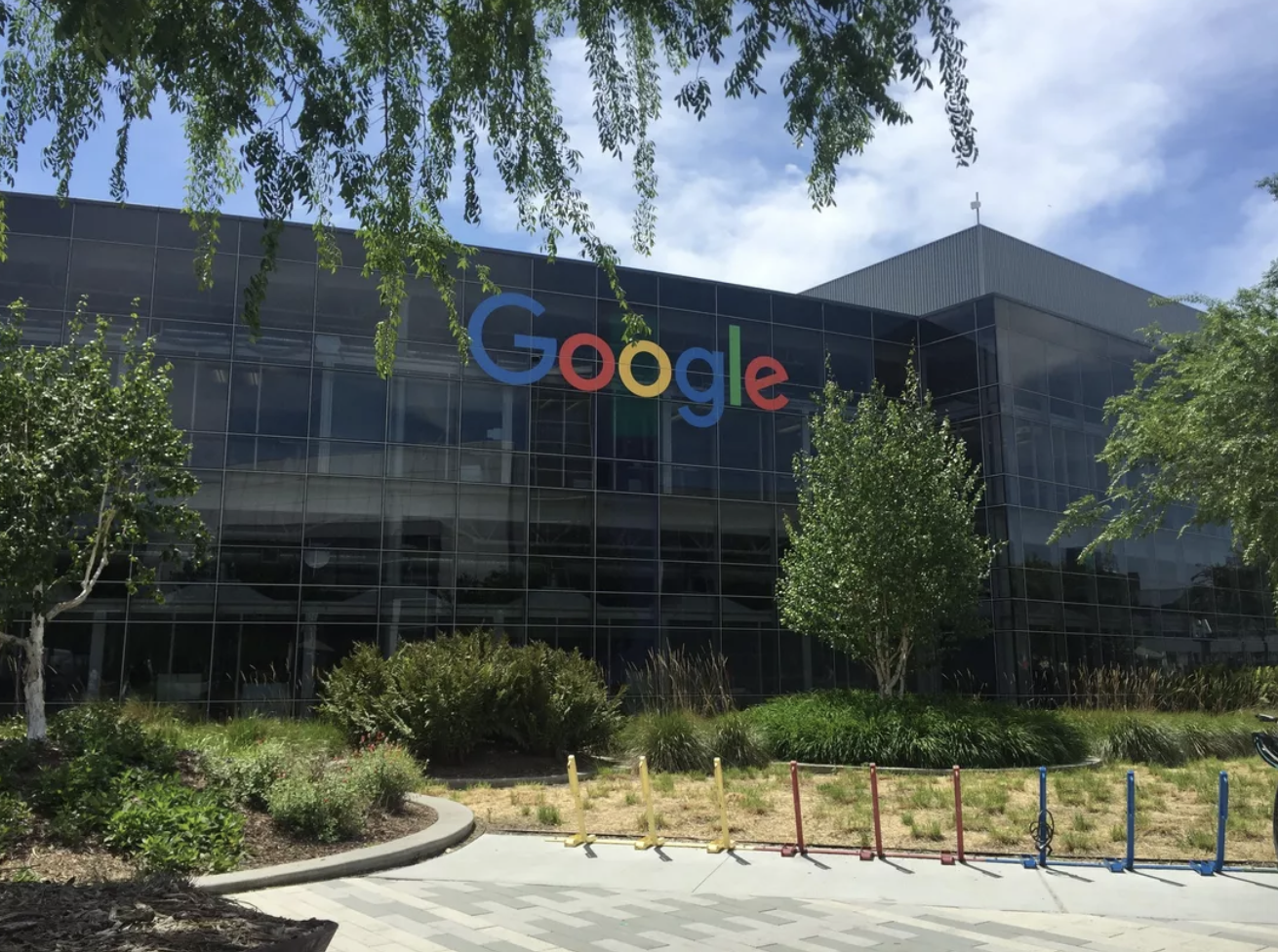 In the email, he calls the move an “experiment” and says it won’t be a problem for him to continue working in the Pacific time zone because he is an “early riser.” He ends the note with “Kia pai tō rā,” or “Have a nice day” in Māori. 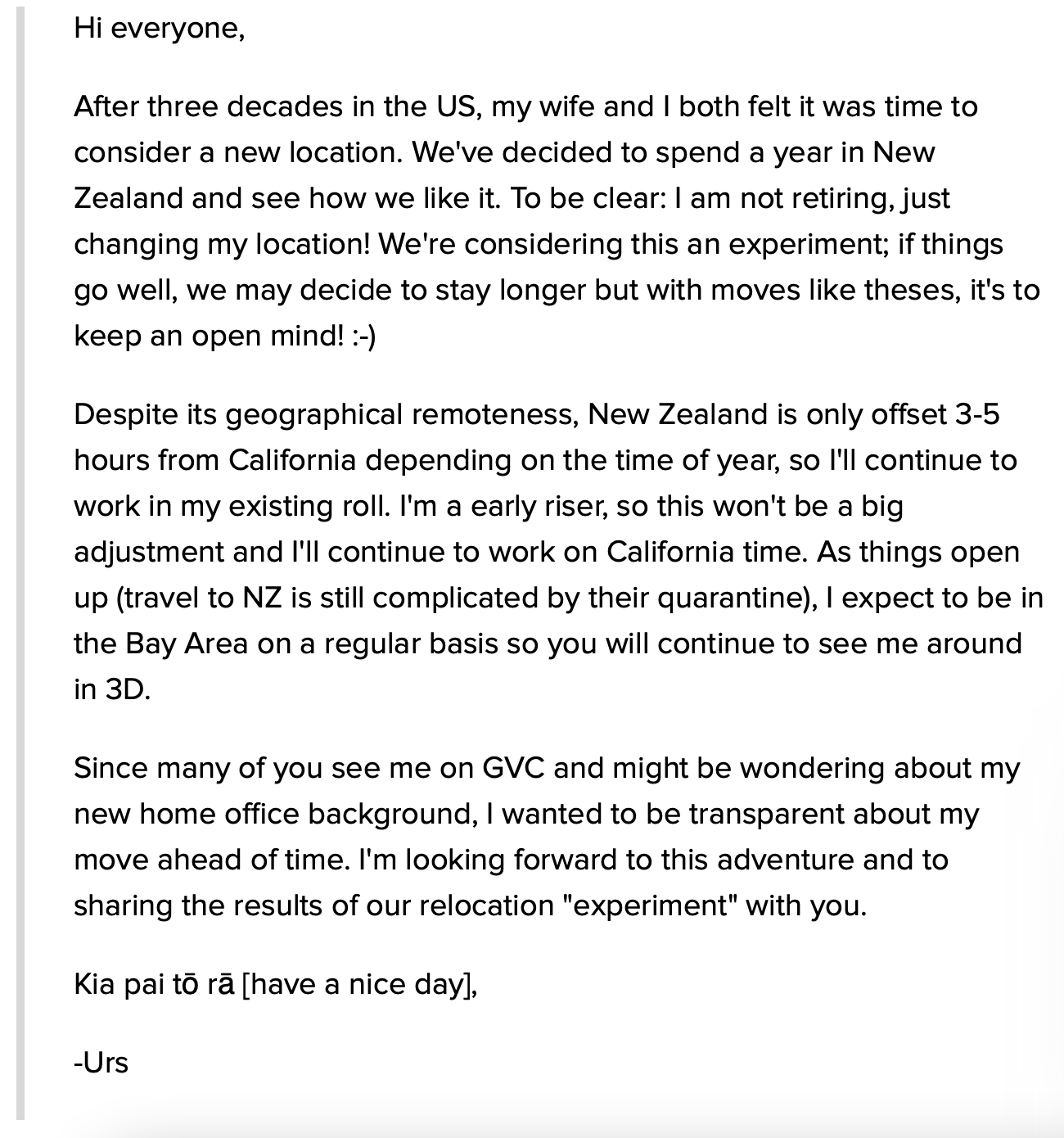 Two Google employees said Hölzle’s situation encapsulated the company’s “hypocritical” policies. Both complained that the relocation represented a double standard in which different rules apply to executives in senior ranks. While his approval came last year, Google employees now undergoing the remote work application process have been told decisions won’t come until August, at the earliest. Approval for Hölzle’s move came before the procedure was instituted.

News of Hölzle’s relocation especially stung because he has been particularly vocal against remote work, employees said. De Vesine, the resigning Googler, said Hölzle had a policy of not letting people work remotely unless they were assigned to an office and that he wouldn’t consider remote work for people who hadn’t reached a certain level of seniority.

A Google spokesman declined to comment on those claims but said every employee is eligible to request remote work, regardless of their group or department. After publication of this story, the spokesman added that employees across all levels of Hölzle’s organization will be approved for remote work or office transfers.

It’s unclear if Hölzle’s salary will be adjusted to the local market, as required for other employees relocating to a new place. The Google spokesman declined to comment on his compensation. If the rule applies to Hölzle, he would likely be taking a pay cut. Mountain View, California, where Hölzle is based, is 18% more expensive than Auckland, New Zealand’s biggest city, according to Expatistan. (It’s unclear what city Hölzle is moving to.)

Google’s stance on salaries has drawn blowback within the tech giant. While some tech companies, like Reddit, have said they’ll pay employees San Francisco or New York City salaries wherever they work, Google has taken a hard line on making pay adjustments. Last month, Google released an internal tool that gives employees estimates of how their salaries would be affected if they relocated.

One Google employee based in San Francisco said they would like to move out of state to be with their partner. The employee would be relocating to an “expensive tourist destination” where the partner grew up. Google doesn’t have an office in the city, so the employee applied for remote work. But it would come with a 25% pay cut, according to the salary tool.

The employee, holding back tears in an interview, said the situation has made them consider leaving the company.

“I will not choose Google over my partner,” the employee said. “If I can’t either work with my manager or figure something out, I have to quit. Google is not that great.”

The remote work policies have taken a toll on the people around Google workers, too. The partner of one Google employee who spoke to CNET said the employee moved to the East Coast during the pandemic so they could live together. Now, the couple may end their relationship because the Google employee is expected back in the Bay Area in September.

Some employees have speculated about Google’s motivations for emphasizing in-person work. Google has major real estate investments in its corporate hubs, including some still in development. A workforce sprawled around the globe makes those investments less useful. In May, San Jose, California, approved plans for an 80-acre Google campus that will include office space, housing and retail. For a company whose identity is in part associated with extravagant corporate facilities and whimsical culture, the stringent policies regarding office transfers and salary adjustments may be a way to nudge employees into staying put, said Jake Rosenfeld, a professor at Washington University in St. Louis who researches compensation.

“It could be an attempt to disincentivize people from moving,” Rosenfeld said. “One way to encourage employees without being seen as heavy-handed or reneging on earlier promises is to say, ‘Look, there’s going to be a different salary structure if you choose to leave our hubs.'”

Employees say one of the most difficult parts of Google’s return-to-office system is the inability to plan for a future with their loved ones. Google has been “vague and unhelpful” about the process for most of the year, one employee said. The confusion has meant workers have to leave crucial decisions, like schooling for children and apartment leases, up in the air.