This year’s headlines have been riddled with reports of “unruly passengers” aboard airplanes—a catch-all phrase that’s come to encompass troublesome passenger behavior ranging from a refusal to wear one’s mask to physically attacking flight crew members and sending them into hospital.

Just today, a combative Delta Air Lines passenger traveling from Washington D.C. to Los Angeles was reported to have assaulted a crew member and an air marshal in-flight. It’s gotten so bad that U.S. Attorney General Merrick B. Garland two weeks ago ordered attorneys across the country to prioritize the prosecution of anyone who endangers the safety of passengers, flight crews and flight attendants.

Twenty-one months into the global pandemic, U.S. flight attendants are finally saying they’ve reached their breaking point when it comes to wrangling unruly passengers. Policing the skies, and struggling to tactfully parry in the face of ongoing verbal and physical abuse from customers, falls pretty far outside the scope of their job descriptions.

Yet, this year, dealing with non-compliant, argumentative, drunken, combative and flat-out violent passengers has become a daily concern. With the Transportation Security Administration (TSA) predicting air-travel volumes will continue to meet or exceed pre-pandemic levels through the end of the year, flight crews fear that increased passenger counts will also mean increased incidence of air rage.

“Since the FAA started keeping track of reports of incidents like this on board, we’ve had more events in 2021 than we’ve had in the entire history of that record-keeping in aviation,” Sara Nelson, Association of Flight Attendants (AFA) president and a flight attendant for two decades, told ABC News. The Federal Aviation Administration (FAA) began keeping records of unruly passenger incidents back in 1995.

By the end of July, about 85 percent of America’s roughly 5,000 flight attendants said they had dealt with an unruly passenger in 2021, with 17 percent reported they’d actually been physically assaulted, a survey conducted by the AFA revealed. Since the start of 2021, the FAA has logged at over 5,000 reports of unruly passenger behavior, roughly 3,700 of which were centered around customers’ refusal to respect the federal mask mandate.

“Air rage has unfortunately become all too common. I’ve lost count of the times I’ve been insulted or threatened on a flight simply for doing my job,” Teddy Andrews, an American Airlines flight attendant, testified before Congress in September. “On this flight, my colleague, on the verge of tears, came to the galley after a passenger refused to wear a mask and had been giving her a hard time. He said: ‘N-word,’ I don’t have to listen to a damn thing you say, this is a free country.'”

“What we see going on now on the aircraft is what’s happening in society,” Andrews added. “This play on masks has become so politicized and so polarized, that people are now acting out on the aircraft. We’ve always asked people to comply—we ask you to wear seatbelts, we ask you to stay seated.” 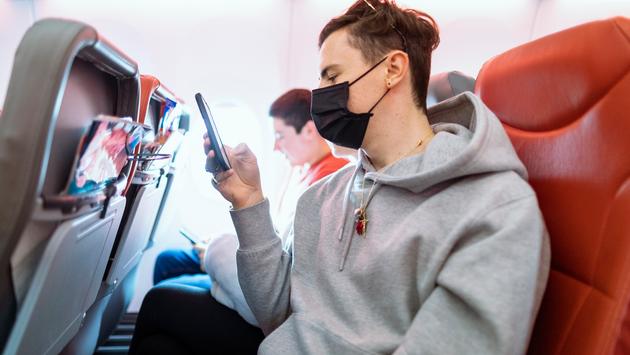 “My job is not to manage you, the one passenger that constantly needs to be reminded to put their mask on. My job is to manage getting people where they need to go as quickly and safely as possible,” said Mitra Amirzadeh, flight attendant for a low-cost carrier and an AFA member, told ABC News.

Andrews stated the basic sentiments of every flight attendant quite succinctly: “All we want to do is come to work and do our job.”

Even aside from the threat of unruly passengers causing havoc aboard their flights, flight crews know that they’re potentially putting themselves in harm’s way just by showing up for work, due to the spread of COVID-19 variants like Delta and now Omicron. “The truth of the matter is, every day that I go to work I’m putting my life at risk. I’m putting my family’s life at risk,” Amirzadeh said.