Dr. Fauci says he won’t step down until COVID is in ‘rearview mirror’

Dr. Anthony Fauci, the country’s top infectious disease expert who has provided reassurance to many Americans during the pandemic, says he won’t quit until the country gets past COVID-19.

“I’m the head of an institute that actually played the major role in the development of the vaccines that have saved now millions of lives from COVID-19,” he told CBS’ “Face the Nation” in an interview that aired Sunday. “I’m the director of the institute that has now been very important in the basic research in leading to the drugs that will now have an important impact in the treatment of COVID-19. That’s what I do.

“So, I’m going to keep doing that until this COVID-19 outbreak is in the rearview mirror, regardless of what anybody says about me, or wants to lie and create crazy fabrications because of political motivations,” concluded Fauci, the chief White House medical adviser and director of the National Institute of Allergy and Infectious Diseases.

The comments came as Fauci is approaching his 81st birthday.

Asked whether passing the baton to someone else could lessen the divisiveness around the government’s pandemic response, he answered in the negative.

Throughout the pandemic, Fauci has led efforts to get Americans to wear masks, practice social distancing and, for nearly a year now, get vaccinated. 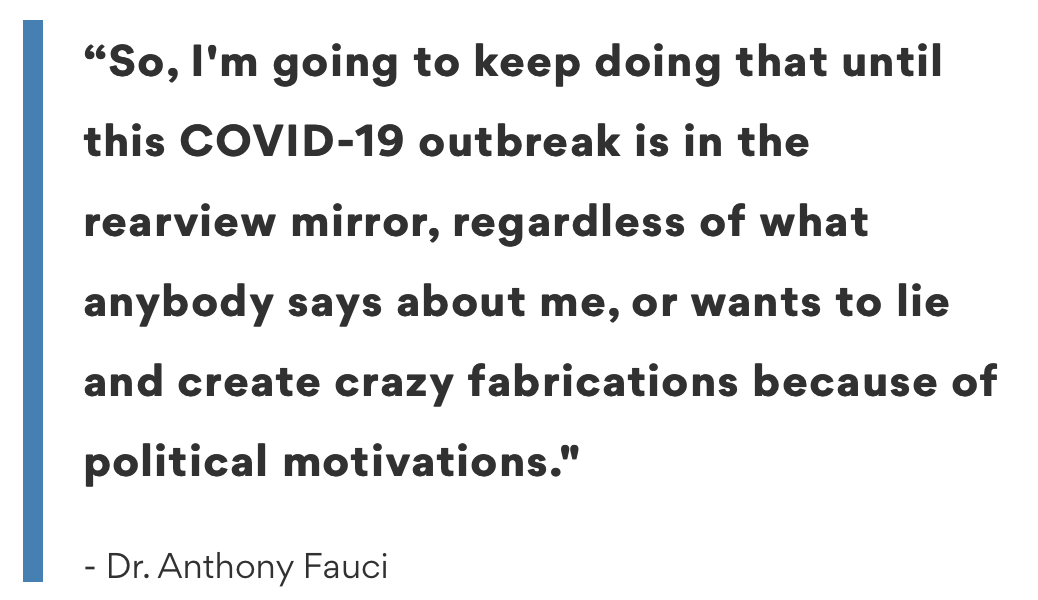 In the process, he became a lightning rod for right-wing criticism of public safety measures. More than half of respondents to a small Hill-HarrisX poll recently said he should step down.

Fauci on Sunday lamented former President Donald Trump’s handling of the outbreak, in which Trump repeatedly played down the seriousness of the threat and resisted safety steps.

“When you have leadership … denying that something is as serious as it is, then you have a real problem. So, in that respect, it could have gone differently,” he said.