NEW YORK — Faced with the rising cost of goods and freight, discount retail chain Dollar Tree said Tuesday it will raise its prices to $1.25 for most of its products.

Dollar Tree said the reason for raising its prices to $1.25 was not due to “short-term or transitory market conditions” and said the price increases were permanent. The higher prices will also allow the company to cope with high merchandise cost increases as well as higher operating costs, such as wages, it said.

“(Dollar Tree) believes this is the appropriate time to shift away from the constraints of the $1.00 price point in order to continue offering extreme value to customers,” the company said in a statement.

Dollar Tree was one of the last true “dollar stores” after most of its competition had moved away from that price point.

The company, which is based in Chesapeake, Virginia, said in September it was testing the higher prices at select stores. On Tuesday, it said it will introduce the new price point in more than 2,000 additional Dollar Tree stores in December and complete the rollout to all its stores by early next year. The company has about 8,000 Dollar Tree stores. 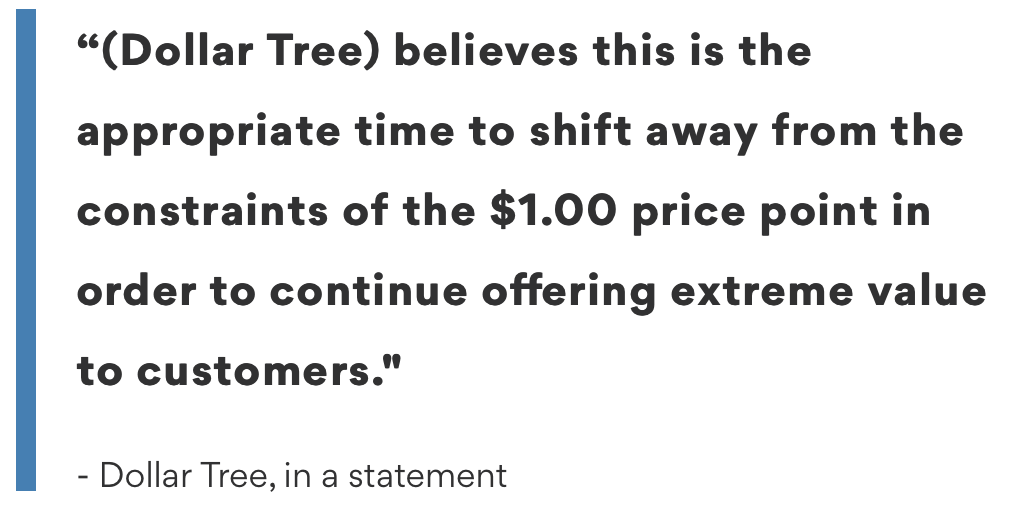 Its shoppers “believe that at $1.25, it’s still going to be an undeniable value because of what they’re seeing out in the marketplace,” Witynski said on a call with industry analysts. “And they know that Dollar Tree hasn’t raised its price in 35 years, so they’re giving us credit.”

The company’s stock rose 9.2% on Tuesday following the announcement, which was paired with the company’s quarterly earnings. Analysts at Citigroup called the earnings “disappointing” but said investors are looking past earnings to the company finally raising prices.