In the classic golf comedy movie “Caddyshack,” Bill Murray plays Carl Spackler, the greenskeeper for the Bushwood Country Club.  Carl talks to himself a lot as he tries to rid the club of an elusive gopher who is tearing up the greens.

But the best example of Carl talking to himself is when he’s pretending to tee off in a golf match at the famous Master’s Tournament.  He announces to himself in his “Cinderella story” that this “unknown comes out of the pack to lead on the final hole.”  He’s a mere 455 yards away from victory and takes a two-iron while swinging and destroying a flower.  Then he switches to a five-iron and swings while destroying another flower.  Finally, he whispers he’s 195 yards away and swings an eight-iron, destroying a third flower, but says triumphantly, “It’s in the hole.”

I wish winning the Master’s or any golf tournament were that easy, but I believe your odds for improving or succeeding will go up if you talk to yourself.

As part of my corporate speeches, I always ask the people in the audience – how many of them talk to themselves?  Invariably the answer is about 50 percent.  Then I say, to the other 50 percent, I can just hear you saying to yourself, “Who me?  I don’t talk to myself.”

I also believe that talking to yourself is a sign of intelligence.  Many of the world’s smartest people talk to themselves.  Albert Einstein talked to himself.  He was hardly a social butterfly when he was growing up, preferring to keep to himself.  Einstein.org reports that he “used to repeat his sentences to himself softly.”

In fact, most researchers believe self-talk may help your brain perform better.  A study published in “Acta Psychologica” showed participants completed item-finding tasks faster when talking themselves through it, suggesting an improvement in visual processing.

Another study published in “Psychology of Sport and Exercise” had 72 tennis players play five rounds, including three training sessions.  Players were separated into two groups, with one being asked to practice self-talk.  This group demonstrated increased self-confidence and reduced anxiety, while also improving their games.

“Psych Central” identifies four types of self-talk that will make you smart and feel better about yourself – complimentary, motivational, goal-setting and other dialogue.  We’ve all had days when we need to remind ourselves that we are capable of the task at hand and walk through the steps to accomplish the desired goal.

I talk to myself because it helps me concentrate and focus, and also improve my memory.  I’ve always repeated things to myself several times to help me remember details, names, phone numbers and so on.  I even read out loud sometimes because I find that I retain information better.  I’ve always considered writing things down to be like talking to yourself.

An article about talking to yourself published in the “Washington Post” in January said that the pandemic has caused more people than ever to talk to themselves absent social gatherings, especially those living alone.  The article cited Charles Fernyhough, a psychology professor at Durham University whose research shows people talk out loud more when under stress.  But he said it is far from crazy.

Sometimes talking to yourself can even save your life.  Remember the movie “Castaway” starring Tom Hanks.  He plays a FedEx troubleshooter stranded on an uninhabited island after his plane crashes in the South Pacific, and the film depicts his desperate attempts to survive and return home.  FedEx packages wash up on shore include a Wilson Sporting Goods volleyball, which he appropriately calls Wilson.  He talks to the volleyball during his four stranded years to keep sane.

If you talk to yourself in public, there will always be people who think you are strange.  So here’s a great solution.  One of my favorite cartoons shows a guy walking down the street with a phone to his ear.  The caption reads, “Wonderful!  This way I can go block after block talking to myself and nobody looks at me as if I am crazy.”

Mackay’s Moral:  Some of your best conversations have an audience of one. 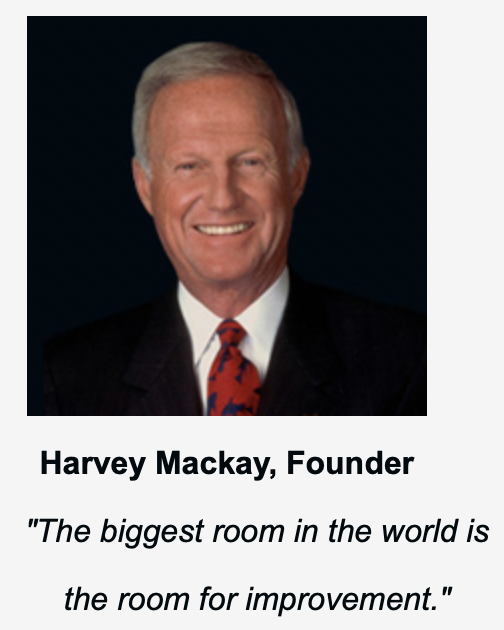