December 11: A look at major COVID-19 developments over the past week

As scientists and public health officials scramble to better understand the new coronavirus variant, omicron, more cases of it are being detected in Georgia.

A third Georgian tested positive for COVID-19 with the omicron variant, the state Department of Public Health announced Thursday. This case was an unvaccinated metro Atlanta resident who had not traveled recently, indicating the new variant may be spreading here in the community.

The patient has mild symptoms and is isolating at home, according to health officials. The state is tracing the person’s contacts in order to identify people who had recent contact with the patient. The DPH did not disclose the person’s sex or age.

“You’re going to have local transmission,” said Dr. Carlos del Rio, distinguished professor of infectious diseases at Emory University. “That’s how it always starts, first you have people who traveled, and then it starts spreading at home.”

Georgia’s first case of the new variant was detected on Dec. 3. That person, a Georgia resident, had traveled through Georgia from South Africa and was diagnosed in New Jersey. The state’s second case was announced Sunday, in a person who also had traveled internationally.

Officials think the variant could be much more widespread in the state, because they only have the capacity to genetically sequence a small portion of test results to confirm its presence.

The omicron variant has mutations that appear to allow it to spread much more quickly than even the delta variant, which drove a spike in cases in the late summer. So far, illnesses caused by omicron tend to be milder than other variants. The omicron variant is new, however, and severe disease takes time to develop, so scientists caution that we will know more about its severity in a couple of months.

Here’s a look at major developments related to COVID-19 in Georgia during the past week.

Vaccinations up ahead of holidays

Georgia has seen an uptick in first-time vaccinations and boosters, federal data show, as coronavirus infections continue to grow and as officials raise the alarm about the new omicron coronavirus variant.

Though the bump in new vaccinations and booster shots is relatively modest, state and federal health officials hope a post-Thanksgiving surge in shots will improve the safety of upcoming December holidays and gatherings.

The holiday might have had an impact on vaccinations during both time periods, and it may take a couple of weeks to see whether the rise in first-time vaccinations and booster shots is sustained.

On Thursday, the CDC expanded booster recommendations to include people as young as 16. At this time, only the Pfizer vaccine is authorized for children.

Like the initial vaccine doses, boosters aren’t effective immediately. It takes about two weeks for peak protection to develop.

All U.S. adults became eligible for boosters on Nov. 19, but an increase in demand for a supplemental dose of vaccine appears to have followed news of the first U.S. case of omicron identified in California on Dec. 1.

Health-care providers administered 2.18 million doses of coronavirus vaccines on Thursday, according to CDC, making it the highest single-day total since late May. 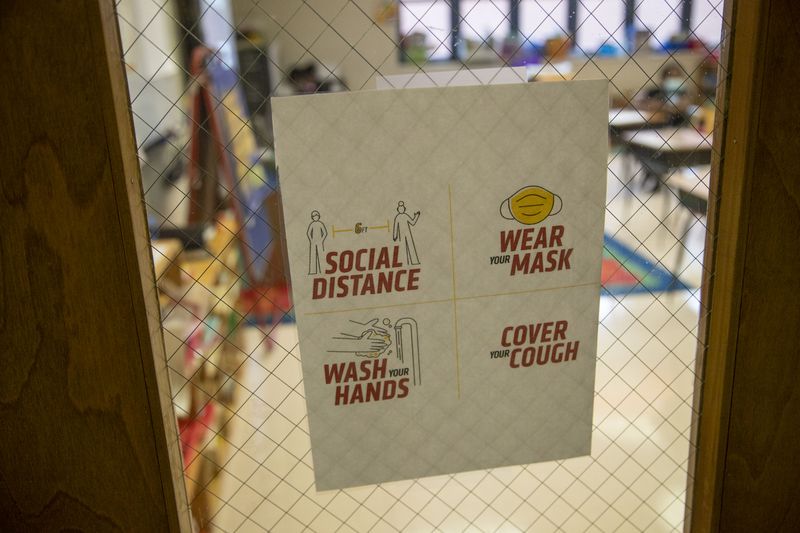 Atlanta students may be allowed to remove their masks in early February, if COVID-19 cases are low enough to meet the district’s newly announced criteria for lifting its long-running mask mandate.

Masks would become optional in Atlanta Public Schools’ facilities come Feb. 1, so long as community transmission in Fulton and DeKalb counties is at “moderate” or “low” levels for two straight weeks. Though the new rules won’t go into effect for nearly two months, district officials unveiled the anticipated change at a Monday board meeting.

“I’d like to focus on the word ‘tentative’ because as we’ve known for the past two years with COVID-19, this virus is incredibly unpredictable and at any moment it could change our guidance and decisions,” said Juliana Prieto, the district’s recently hired epidemiologist.

Students will continue to wear masks while on buses because of federal requirements.