This electric crossover now has a name and could arrive as soon as 2024 with up to 440 miles of range riding on the new STLA Medium platform.

Chrysler’s first new model in several years looks to be an electric crossover that could wear the historic Airflow nameplate. First shown during Stellantis’s EV Day event earlier this year, we now have more information on this concept car that’s meant to showcase new technologies including electric platforms, driver-assistance features, and infotainment software. Stellantis CEO Carlos Tavares said during the company’s Software Day presentation that it’s “more than a pure concept” and hinted that this vehicle could make its way to production by 2024, which is backed up by U.S. trademarks for the Airflow name filed in 2019 and 2021.

It’s no coincidence that this Chrysler has a similar shape and similar proportions to the Ford Mustang Mach-E, our EV of the Year winner that’s already achieving sales success in the marketplace. While we don’t know the exact size of the Airflow, it appears to be a potential competitor for the Mach-E and other compact-crossover EV models such as the Tesla Model Y and Volkswagen ID.4.

Stellantis has announced plans for four new EV platforms including STLA Small, STLA Medium, STLA Large, and STLA Frame. We think that the Airflow would fit on STLA Medium. Based on previous claims Stellantis has made about its new EV models, this means it could achieve a driving range of up to 440 miles and use electric motors making between 167 and 241 horsepower. A dual-motor all-wheel-drive option is likely. 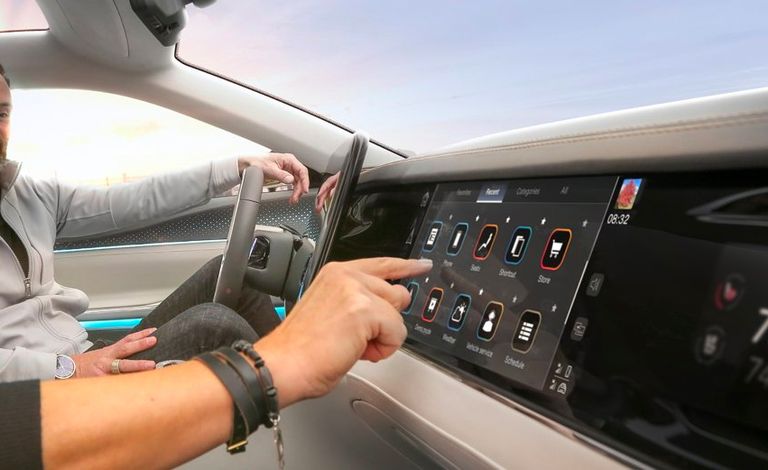 Inside, the Airflow features an onslaught of screens, with a giant central infotainment display that’s flanked by separate screens for the driver and passenger. There are also rear-seat entertainment screens. Connectivity features will likely include over-the-air updates and vehicle-to-vehicle communication.

There’s no concrete timeline on the Chrysler Airflow’s arrival as a production model, but given that the concept has side market lights and exterior mirrors, we think it will reach showrooms sooner rather than later. Stellantis is targeting 2024 for its new platforms, so we could possibly see this Chrysler as a 2025 model in the U.S.