States with highest unvaccinated numbers will be most at risk: ex-FDA executive

“Connecticut, for example where I am, shows no upsurge of infection, but Mississippi, Alabama, Arkansas, Missouri, show very substantial upsurges of infection. That’s based entirely on how much population-wide immunity you have based on vaccination,” he said.

The delta variant could cause an upsurge in infections, but the levels will vary depending on the rates of vaccination in each area.

“When we look across the United States, we see wide variance in terms of vaccination rates,” said Gottlieb.

Last week, the Atlanta-based Centers for Disease Control and Prevention elevated the delta COVID-19 variant as a “variant of concern.” On Friday, CDC Director Rochelle Walensky said she expects the delta variant of the coronavirus will become the dominant strain in the U.S.

During an appearance on ABC’s “Good Morning America,” she told Americans who get their shots that “you’ll be protected against this delta variant.” That strain has become dominant in Britain after it was first detected in India.

On Friday, Biden credited scientists, companies, the American people and his whole-of-government effort. The president noted the widespread vaccination campaign had set the stage for most Americans to have a relatively normal summer as businesses reopen and employers hire.

“We’re heading into a very different summer compared to last year,” the president said. “A bright summer. Prayerfully, a summer of joy.”

But as Biden marks one milestone, he is in danger of failing to meet another: his target to have 70% of American adults at least partially vaccinated by July Fourth, in a little over two weeks.

Overall, about 168 million American adults, or 65.1% of the U.S. population 18 years and older, have received at least one dose of the COVID-19 vaccine as of Friday, according to the CDC. 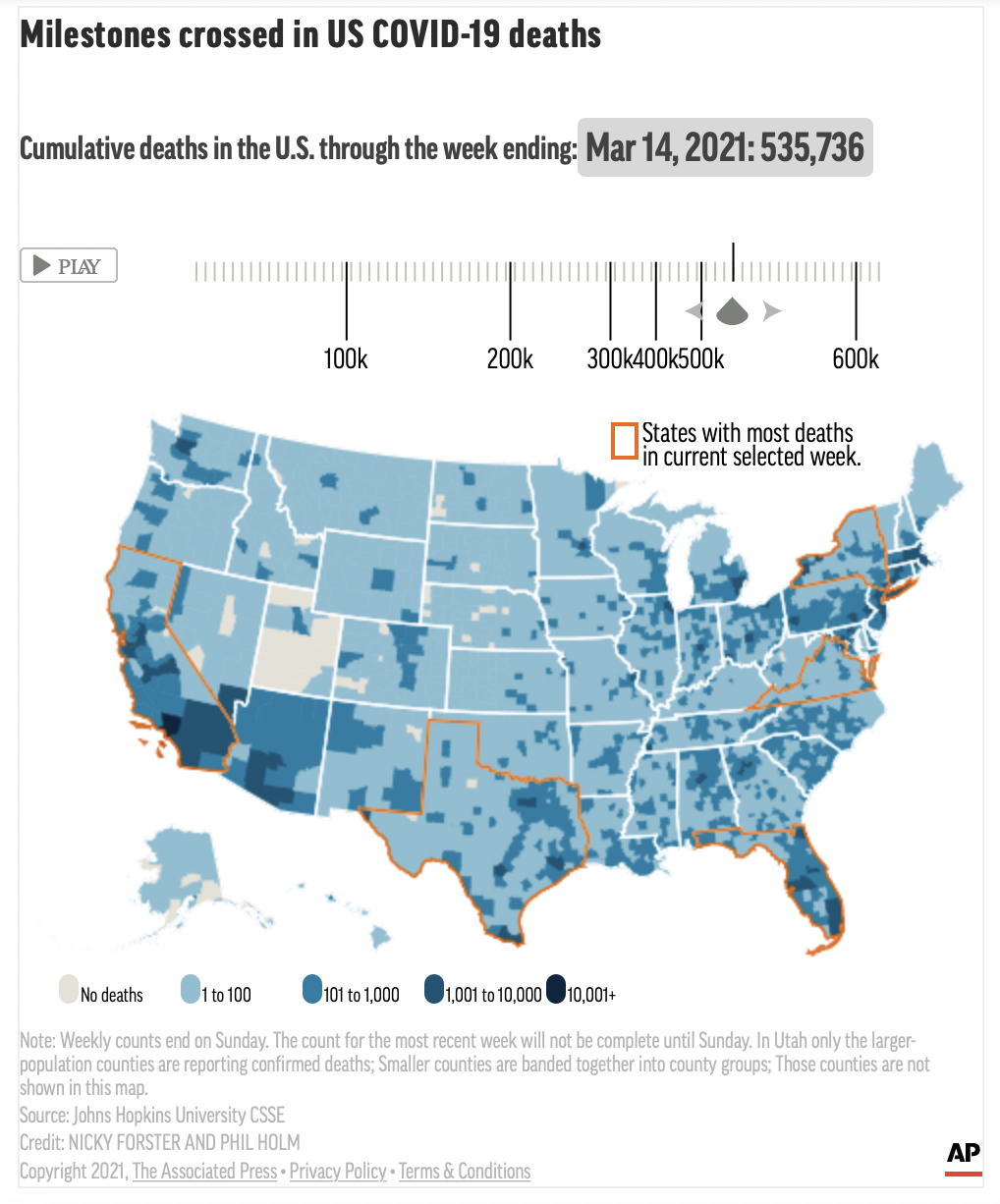 The pace of new vaccinations in the U.S. has dropped significantly from a high of nearly 2 million per day about two months ago, jeopardizing Biden’s ability to hit the 70% mark.

The White House said its whole-of-government approach to the vaccination effort has put the virus in retreat, which in turn has brought COVID-19 cases, hospitalizations and deaths to their lowest levels in more than a year. But Biden noted in his remarks that some communities in states with lower vaccination rates are seeing cases and hospitalizations increase.

The administration is in the middle of a monthlong blitz to combat vaccine hesitancy and the lack of urgency some people feel to get the shots, particularly in the South and Midwest.

The Biden administration insists that even if the 70% vaccination goal is unmet, it will have little effect on the overall U.S. recovery, which is already ahead of where Biden said it would be months ago.

While two of the states slammed hardest by the disaster, California and New York, celebrated their reopenings last week with fireworks and a multimillion-dollar drawing, hospitalizations in parts of Missouri are surging and cases are rising sharply in Texas, illustrating the challenges the country faces this summer.

“It’s a race between the vaccines going into people and the current or future variants,” said Kansas Health Secretary Dr. Lee Norman.

Average deaths and cases per day have plummeted 90% or more across the U.S. since the winter. But the picture is uneven.

In Texas, the rolling average of newly confirmed infections has climbed from about 1,000 per day on May 31 to nearly 2,000 this week.

A swath of Missouri is seeing a big rise in cases and hospitalizations as tourists eager to get out after being cooped up for a year make their way to popular destinations including Branson and Lake of the Ozarks. Health officials said more than 200 people were hospitalized with the virus in southwestern Missouri, nearly double the number at the start of May. The number of patients in intensive care units in the region has tripled.

Health experts cite two factors driving the surge there: the faster-spreading delta variant and a reluctance among residents to get vaccinated.

Among the states that don’t expect to hit the goal are Kansas and Idaho. In Idaho, some counties have adult vaccination rates under 30%, said Elke Shaw-Tulloch, public health administrator for the state Department of Health and Welfare.

To increase vaccinations, several states are working to break up large shipments of vaccine into smaller lots, which can then be distributed to doctors’ offices. Health officials see primary care physicians as key to easing people’s concerns.

Big, splashy giveaways such as lotteries have gotten a lot of headlines and dispensed millions of dollars. In Maine, home of the outdoor wear company L.L. Bean, Bean gift cards were a big hit. But elsewhere, there has been skepticism about such programs.