PLAINS — Before walking into the old Plains High School to honor his longtime friends Jimmy and Rosalynn Carter on their 75th wedding anniversary, Habitat for Humanity International CEO Jonathan Reckford reminded everyone of how the couple was so adept at treating the most powerful and the least powerful with the same sense of humility.

All of that was evident on Saturday when hundreds of the Carters’ neighbors from tiny Plains, Georgia, came out to celebrate them, along with the likes of former President Bill Clinton, former U.S. Sen. Hillary Clinton, U.S. Sen. Raphael Warnock, U.S. Speaker of the House Nancy Pelosi, civil rights icon Andrew Young, country music stars Garth Brooks and Trisha Yearwood and media mogul Ted Turner.

Before a formal program, Jimmy Carter, 96, and Rosalynn Carter, 93, visited about 10 classrooms that housed the 350 guests to greet them personally. Carter family members, including all four of their children and a host of grandchildren, mingled with the crowd that was gathering in the auditorium.

It was the first time that the extended Carter family has gotten together since the pandemic. They hugged every neck they could find.

“They taught us their values. Christian values. Plains, Georgia, values,” said their son, Chip Carter. “They raised a family well. They protected their partnership perfectly.”

The Carters, who have known each other ever since Rosalynn was born, were married on July 7, 1946, right here in Plains. After their four years in the White House, they ignored the trappings of a big city like Atlanta and returned to their hometown, where they settled on a quiet rural life — when they weren’t building houses for Habitat for Humanity, or eradicating diseases around the world or monitoring global elections through the Carter Center.

“You can’t find a more honorable couple than them,” said Dan Ostrander, a Carter friend for more than 30 years who made a point to emphasize that he is a Republican. “I might not always agree with him, but he tells you what he believes and shoots straight.”

President Clinton, who sat on the front row with Pelosi, later said, “Every American should be uplifted by this celebration.”

Pelosi added that she had a “real appreciation for his presidency and for how he and Rosalynn were so dedicated to public service.”

“They mean so much to our nation and to our state and to me personally,” said Warnock, adding that Carter is the first president whom he remembers. “What an amazing legacy of living and loving each other while spreading love all over the world. That legacy lives out not only in the longevity of their marriage but in the work that they have done together. That is part of the key.”

The town of 700, where there are no stoplights, was bustling Saturday afternoon. Foot traffic in and out of the vintage shops dotting downtown was brisk, as tourists scrambled to get a sample of the town’s famous peanut butter ice cream.

At the high school, which is now part of the National Park Service, the party was a down-home affair, as guests were served yellow cake with white frosting, topped with the numeral 75 or flowers, along with tomato and pimento cheese sandwiches. 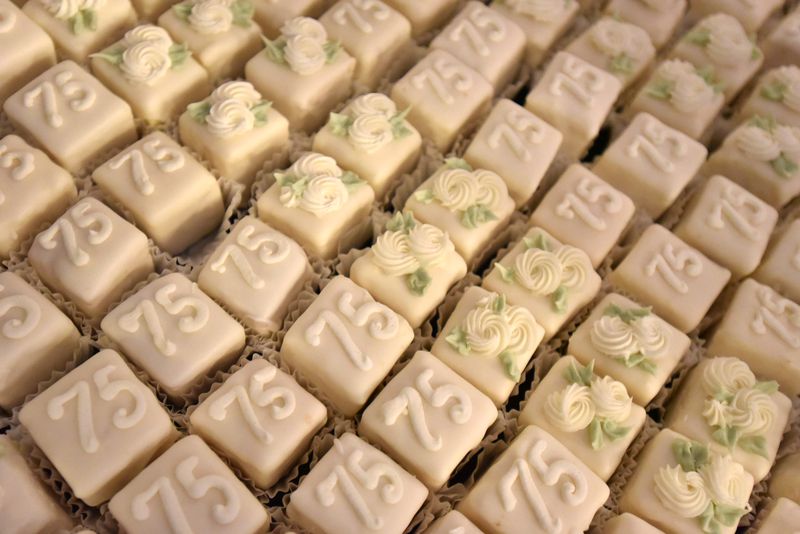 When the guests left, they were each given commemorative items — a bag of peanuts, a challenge coin and a set of coasters — bundled up in bags sealed with clothespins.

“This is the down-home, real way in which they touch and feel the world,” said Paige Alexander, CEO of the Carter Center. “And their marriage is indicative of his long-term view of how he is going to stay involved in things, whether it is the Carter Center, or if it’s a marriage. And this is a strong marriage.”

Aside from a performance by pianist David Osborne, and a toast from Chip Carter, none of the dignitaries spoke at the party, leaving the spotlight brightly on the couple. They reveled in it and Jason Carter, the oldest grandchild of the Carters, said, “They were living for this day.”

“I have done a lot of interviews lately and everyone asked me, ‘How did you live with that man for so long,’” Rosalynn Carter said over laughter at the celebration. “But it has been a really wonderful 75 years.” 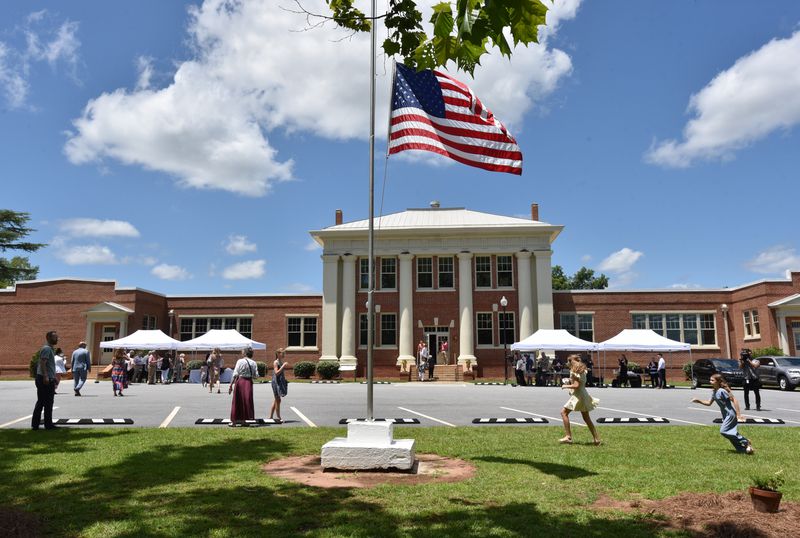 Sitting beside her husband in front of the stage in the auditorium, Rosalynn Carter told the story about how she didn’t like boys growing up and how she would order her mother to tell callers she wasn’t home, even when she was.

“Then along came Jimmy Carter,” Rosalynn Carter said. “And my life has been an adventure ever since.”

She then handed the microphone to her husband of 75 years.

“To my wife, Rosalynn,” President Carter said, flashing his famous smile, “I want to express my particular gratitude for being the woman that I chose for my wife.”