Broadway’s Reopening Fears Amid COVID-19: “There’s So Much We Still Don’t Know”

The July 19 shuttering of Andrew Lloyd Webber’s production of Cinderella just hours ahead of its world premiere in London is the latest major setback to that city’s once-thriving theaterindustry, decimated by the pandemic. A strict government contact-tracing program has led to a string of high-profile show closings, The Prince of Egypt and Hairspray among them. Closely watching the fallout unfolding across the pond are the producers, performers and publicists who keep Broadway alight, all of them hoping to avoid the same fate once the Great White Way begins to fully reopen come September.

So far, Broadway has taken a more cautious approach than the West End. It began with Springsteen on Broadway, the Bruce Springsteen confessional concert that returned June 26 to a sold-out crowd of 1,721 at the St. James Theatre. All audience members presented proof of vaccination to gain admittance — a policy devised by Jordan Roth, president and majority owner of Jujamcyn Theaters, the third-largest landlord on Broadway, which counts the St. James among its stable of five theaters. Despite anti-vax protesters gathering outside, the strategy appears to be working. Says Rick Miramontez, president of DKC/O&M, the publicity firm that reps about a third of Broadway shows (including Springsteen on Broadway), “It went as smooth as smooth can be.” 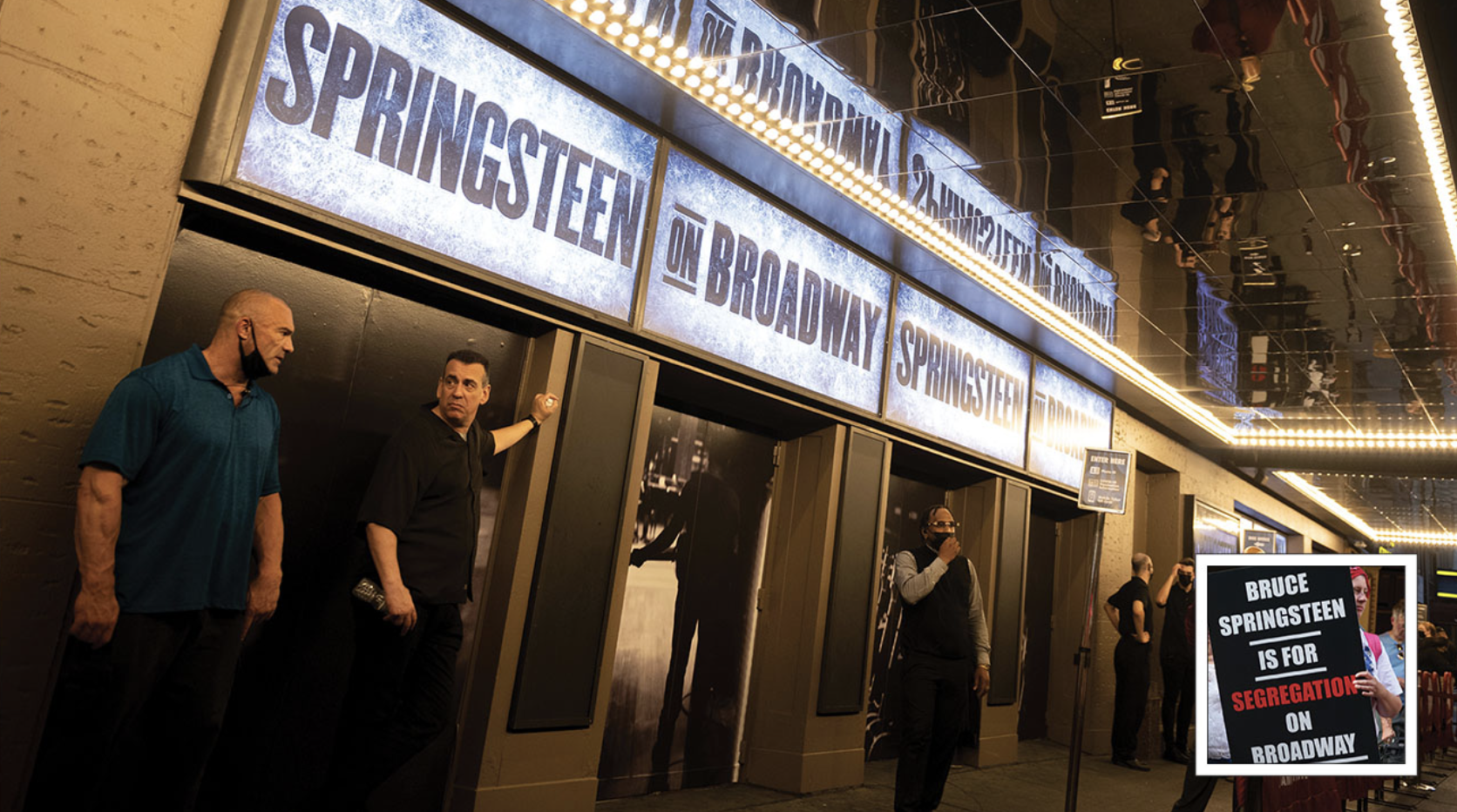 But it’s the back of house that has been proving the problem in the West End, where even one positive COVID-19 test among cast or crew sends everyone into isolation for 10 days — they are informed via a smartphone app. That program, what Webber called a “blunt instrument” in announcing Cinderella’s closure, is due to end Aug. 16.

On Broadway, things are still very much in a state of flux. The trade association Broadway League had held throughout the pandemic that theaters will only reopen to 100 percent capacity — regardless of ticket sales — and nothing less. Beyond that, nothing is yet fixed. “There’s so much we still don’t know,” says Broadway League president Charlotte St. Martin. “We know that the state at this point has given us the go-ahead to open with the guidelines that the audience does not have to be masked if they’ve been vaccinated. You can have unvaccinated people with masks sitting in their own special section. It will depend upon the theater.”

The next test will come with the start of previews on Aug. 4 of Pass Over, a retelling of the “Exodus” story. The play’s home is in the August Wilson Theatre, also owned by Jujamcyn, and the same proof-of-vaccination policy will apply to all attendees. And like Springsteen on Broadway, the show benefits from having a cast of only two (Springsteen brought wife Patti Scialfa onstage for a duet). With crew, neither show should have more than a dozen back-of-house workers, reducing the chances of a positive COVID-19 diagnosis.

But risk could increase exponentially when larger-scale (and hugely profitable) productions like Wicked and The Lion King, where cast and crew numbers can be as high as 125, resume performances Sept. 14. Just how testing protocols will work on shows of that scale — and whether positive test results, even a single one, will require them to shut down — has yet to be determined.

“The current thinking is that everyone [employed by a show] will be vaccinated and will have proved that, and there will be frequent testing,” says St. Martin. “I know everybody wants to know what the protocols are, but we’re still working with the unions because there’s new scientific information all the time.” Contrary to erroneous reports in the media, Actors’ Equity Association does not enforce vaccinations among its membership, nor does it plan to; rather, such a requirement will fall to individual producers.

St. Martin says that what’s unfolding in London is unlikely to befall Broadway. “One of the reasons we haven’t opened earlier is because our financial models don’t allow us to open and close and reopen and close and reopen. If it closes, it stays closed permanently,” she says. “Our producers tell us to reopen one of these shows, it costs anywhere from $1.6 million to $4 million depending on the size of the show, the age of the show, the number of castmembers.”

Helping to soften that blow is the Shuttered Venue Operators Grant, a $16 billion federal aid program that has distributed grants of $10 million to every shuttered Broadway show — and additional grants of $10 million for touring productions. (In Hamilton’s case, which has four touring productions, that amounted to $50 million in total federal aid.) The U.K. government, by contrast, has offered no lifelines to theater, leading Les Misérables and Phantom of the Opera producer Cameron Mackintosh to lambaste Prime Minister Boris Johnson in an open letter, writing, “We have simply been left to fend for ourselves.

But financial lifelines can’t change the fact of hard science — that proliferating variants and vaccine reluctance has led to yet another surge in COVID cases, even among the vaccinated. Nevertheless, the plan is for the shows to go on, and, as Dick Van Dyke sang in Bye, Bye Birdie, to put on a happy face. “I thought we’d be semi-busy, but all of the shows running [pre-pandemic] plus several new shows are coming back,” says Miramontez. “It’s not going to be just busy, but ridiculously busy at an unprecedented time. Barring some major setback, I think it’s going to be a breathtaking comeback.”