Battery Taxonomy: The Differences between Hybrid and EV Batteries

While electric vehicles require both range and power from the battery pack, hybrids require similar power with far less energy.

But a pure electric car might have a battery ten times as large as a PHEV, which, in turn might have a battery times ten times as large as a hybrid. So the amount of power flow relative to the energy capacity of the battery—its power-to-energy ratio—is vastly different for the batteries in the different electrified vehicles. The chart below uses examples of each type of vehicle from Ford’s lineup to illustrate the differences in battery capacity and power-to-energy ratios. 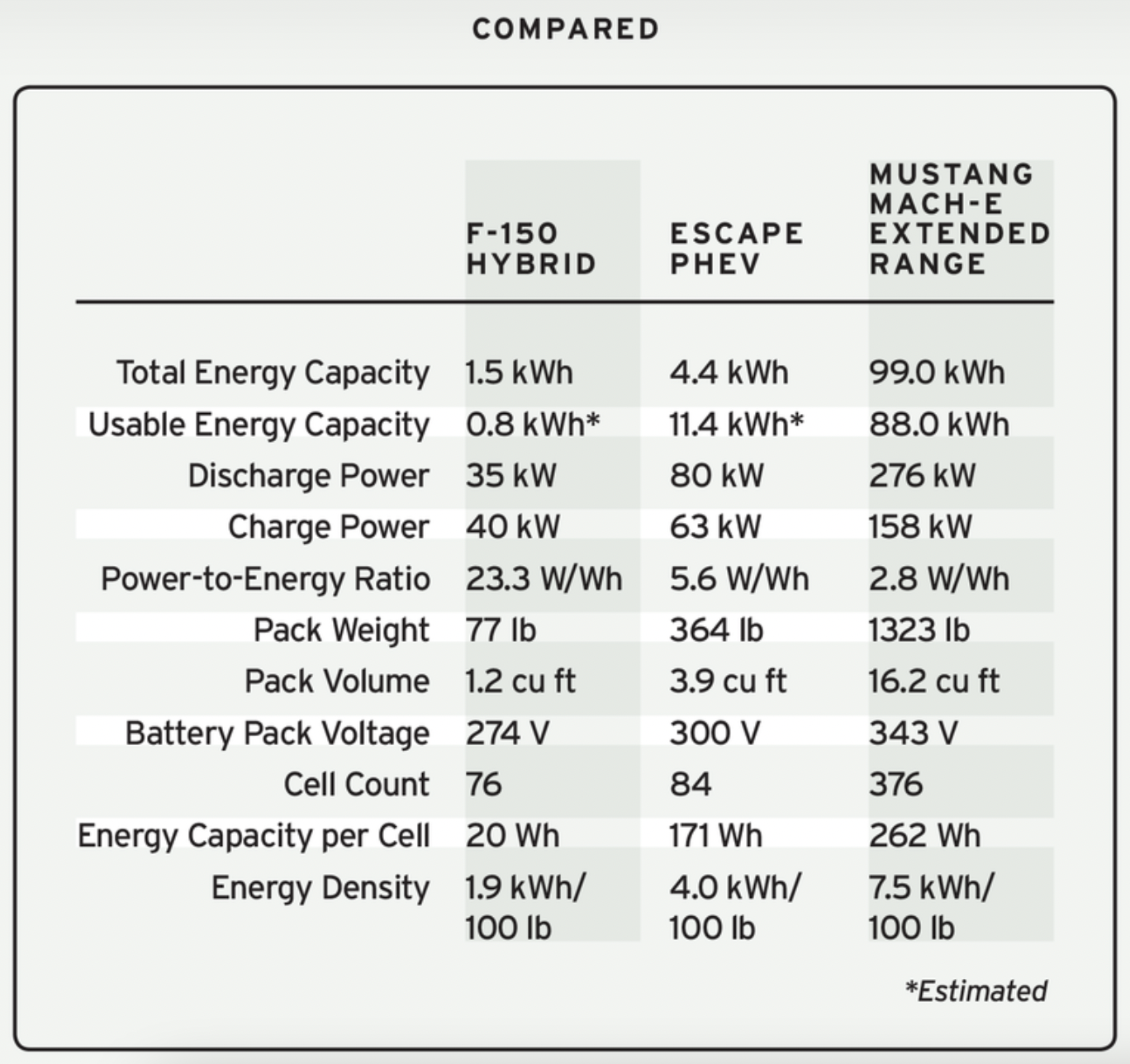 Moreover, because the three different vehicles use their electrified powertrains in different ways, the number of charge/discharge cycles seen by each battery varies considerably. In a hybrid, designed to boost the efficiency of a gasoline engine, the power is constantly flowing into and out of a small battery designed to be compact, light, and not very expensive. You might fully charge and discharge the battery five times on the way to a grocery store to get a gallon of milk.

A plug-in hybrid has a much bigger battery, designed to fully power a vehicle for distances between about 10 and 40 miles. It also sees constant charging and discharging in urban driving, but these power flows are small compared to its total capacity, which might only be fully discharged once or twice a day. A BEV has a much larger battery still and that battery rarely sees full charge/discharge cycles—perhaps only during road trips or our 75-mph highway range test.

According to Bab Taenaka, Ford’s Senior Technical Expert in Battery Cell Technology and Advanced Battery Systems, a battery in a BEV might only see 1000 charge/discharge cycles in its lifetime. That’s dramatically fewer than the 4000–8000 cycles a PHEV’s battery might see, while a hybrid’s battery could endure 100,000 cycles or more.

“As a battery charges and discharges, its internal resistance increases,” says Taenaka. One way to control this is to limit how much of a battery’s capacity is used during a charge/discharge cycle. For a hybrid such as the F-150, which sees the maximum number of cycles, the “state-of-charge window (the fraction of the battery capacity that is actually used) is probably around 50 percent today.” For PHEVs such the Escape, that usable fraction might rise to 80 percent or so. And for the Mustang Mach-E, it’s approaching 90 percent.

To adjust a battery’s power-to-energy ratio the engineers alter the thicknesses of both the current collectors and their chemical coatings. A hybrid’s brief spurts of peak power require high electrical current from a small battery, which, oddly enough, means thinner electrodes and thinner chemical coatings. That’s because these thinner elements bring a larger electrode surface area in contact with the electrolyte.

Conversely, a BEV uses thicker electrodes and a higher loading of active chemical material. Thicker electrodes enable greater energy density because more of the cell’s total volume is made up of electrodes and active material and less is occupied by the separator, current collectors, and electrolyte. Maximizing the available kilowatt-hours per pound becomes more important as batteries get larger. A typical chemical coating is lithium-manganese-oxide—and there are others—but the chemistry is not critical to determining if the cell is more power- or energy-dense.

One other consideration is the total voltage of the battery pack. Ford uses hybrid electrical systems that max out around 400 volts, so all three types of cars have their cells wired to stay within this limitation. Since most lithium-ion cells operate at 3.6-volts, the F-150 Hybrid battery uses 76 small cells wired in series to produce 274 volts. The Escape PHEV’s 84, much-larger cells—171 watt-hours per cell vs. 20—are also wired in series totaling 300 volts. However, the 376 even-larger cells (262 watt-hours) in the Mustang Mach-E are wired in four strings of 94 cells, each totaling 343 volts, which are then wired in parallel, to stay within the 400-volt limit of Ford’s electrical architecture.