Balmain’s Olivier Rousteing on Secret Hospitalization, Recovery After Tragic Accident: “I’ve Been Hiding This Too Long”

The French fashion designer thanked hospital staff and used the incident as a way to challenge the obsession with perfection and keeping up social media appearances.

Superstar Balmain designer Olivier Rousteing is opening up more about a tragic accident that happened inside his home, one that left him hospitalized and ashamed as he sought to keep the recovery under wraps while keeping up appearances.

“Exactly a year ago, the fireplace inside my house exploded,” Rousteing shared Saturday with his 7 million Instagram followers alongside an image that shows his torso and arms extensively bandaged with bruises and redness on his face, a shocking sight to anyone that keeps up with his carefully curated and typically glamorous account. “I woke up the next morning in Paris’ Hôpital Saint Louis. The talented staff at that famous hospital, which was dealing with an incredible number of COVID cases at that same time, took amazing care of me. I cannot thank them enough.”

He went on to say that he hid the injury “from as many people as possible” and while he’s not really sure why, it could be “this obsession with perfection that fashion is known for and my own insecurities.” While he recovered, Rousteing continued to work full time on new Balmain collections while also hiding the aftermath of the injury with masks, turtlenecks and rings on his fingers to cover the burns.

“And I truly realized that the power of social media is to reveal only what you want to show,” he continued. “Kind of allowing us to create our own special narrative that avoids what we do not wish to see or show: this is our new world.”

News of the injury was first reported by The New York Times on Sept. 30 in a profile by Vanessa Friedman. She writes that the accident happened last October and kept Rousteing in and out of the hospital for two months. He recovered through the spring and summer, offering, “It made me understand how important comfort is. And how clothing works to help you show what you can show, and hide what you need to hide, without anyone realizing what you are hiding.”

Rousteing, who burst onto the scene in his early 20s as a wunderkind of the fashion industry, is close with a number of A-list stars and has dressed everyone from Beyoncé and Zendaya to the Kardashians and Jennifer Lopez. He recently celebrated a milestone 10th anniversary at the helm of the French fashion house, and today’s honest reveal comes on the heels of an intimate look at his life in Netflix’s Wonder Boy. The documentary revealed an emotional journey of searching for his adoptive parents as a way to connect with his roots and discover his true identity. 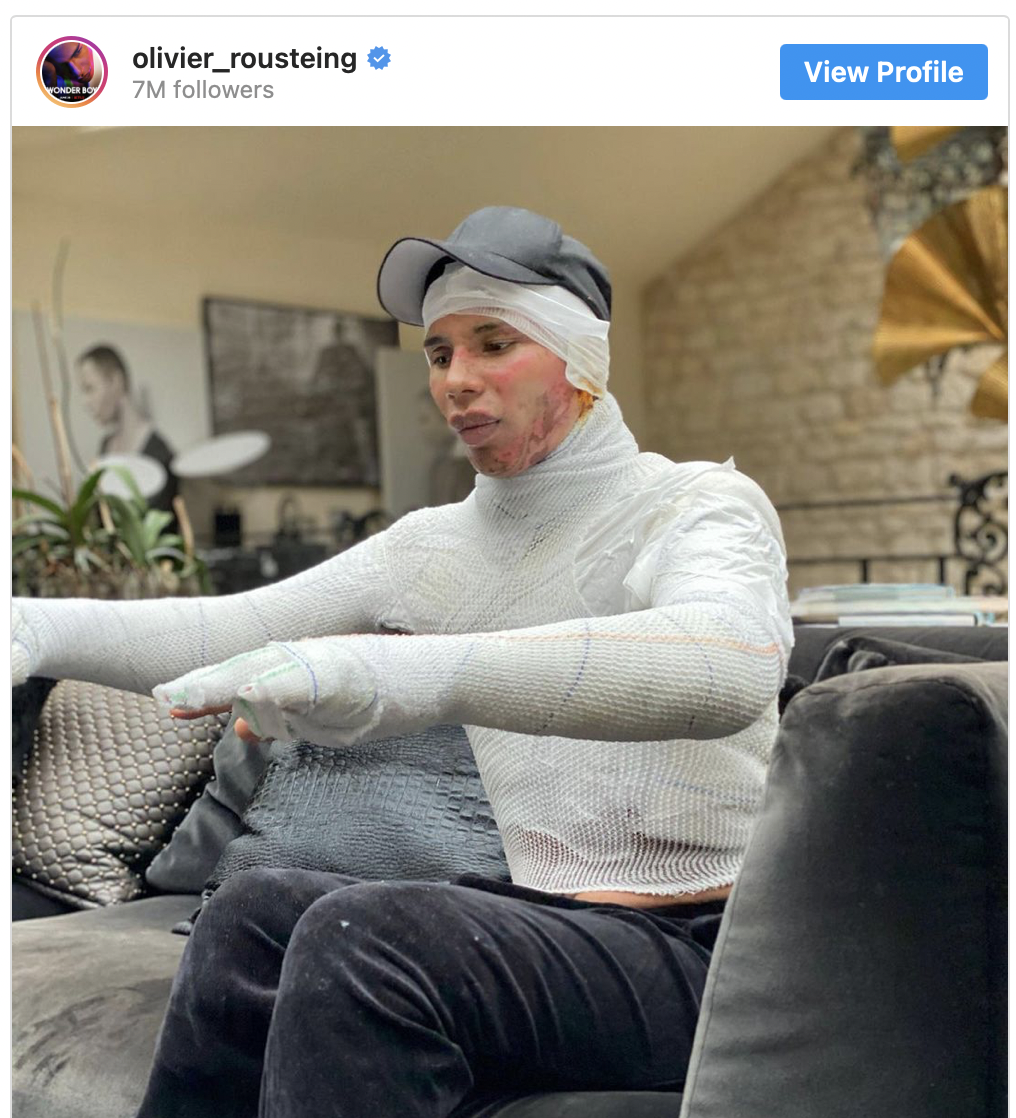 During an interview to promote its release, Rousteing talked to THR about the power of appearances and how he’s learned to break free from public perception. He said, “You know, I got the job of being creative director at 24 years old. I was really young and I tried really to be what we call the perfect designer. Never do a wrong step, always under the spotlights of fashion. So I really kind of crystallized myself, if I can say, into a kind of box of just the glamour of Olivier and the glamour of Balmain. Everything is sparkle. Everything is shiny. There’s never a sadness. It’s like a party all night long, or all life long in a way. This is maybe a character that I wanted to play because I was hiding all my fears. And I was just like, I’m going to break that image that I created of myself.”

As for how he’s doing today, Rousteing ended his Instagram post with a message of gratitude for God and his Balmain family with an eye on the future. “Today, I feel so free, so good and so lucky. I’m beginning a new chapter with a smile on my face and a heart full of gratitude.”

The Hollywood Reporter reached out to a representative for Rousteing for further comment.