U.S., other countries pledge assistance after some towns destroyed

PORT-AU-PRINCE, Haiti — At least 724 people were killed and 2,800 injured when a 7.2 magnitude earthquake struck Haiti on Saturday, and Prime Minister Ariel Henry said he was rushing aid to affected areas, where some towns were destroyed and hospitals were overwhelmed with wounded people.

The epicenter of the quake was about 78 miles west of the capital of Port-au-Prince, the U.S. Geological Survey said, and widespread damage was reported.

The United States Geological Survey estimated “thousands of fatalities” and “tens of thousands of injuries in poor mountainous communities.”

Jerry Chandler, Haiti’s director of civil protection, declared a one-month state of emergency for the whole country and said he would not ask for international help until the extent of the damages is known. He said some towns were almost completely razed and the government had people in the coastal town of Les Cayes to help plan and coordinate the response.

“The most important thing is to recover as many survivors as possible under the rubble,” he said. “We have learned that the local hospitals, in particular that of Les Cayes, are overwhelmed with wounded, fractured people.”

He said the International Red Cross and hospitals in unaffected areas were helping to care for the injured, and appealed to Haitians for unity.

“The needs are enormous. We must take care of the injured and fractured, but also provide food, aid, temporary shelter and psychological support,” he said. 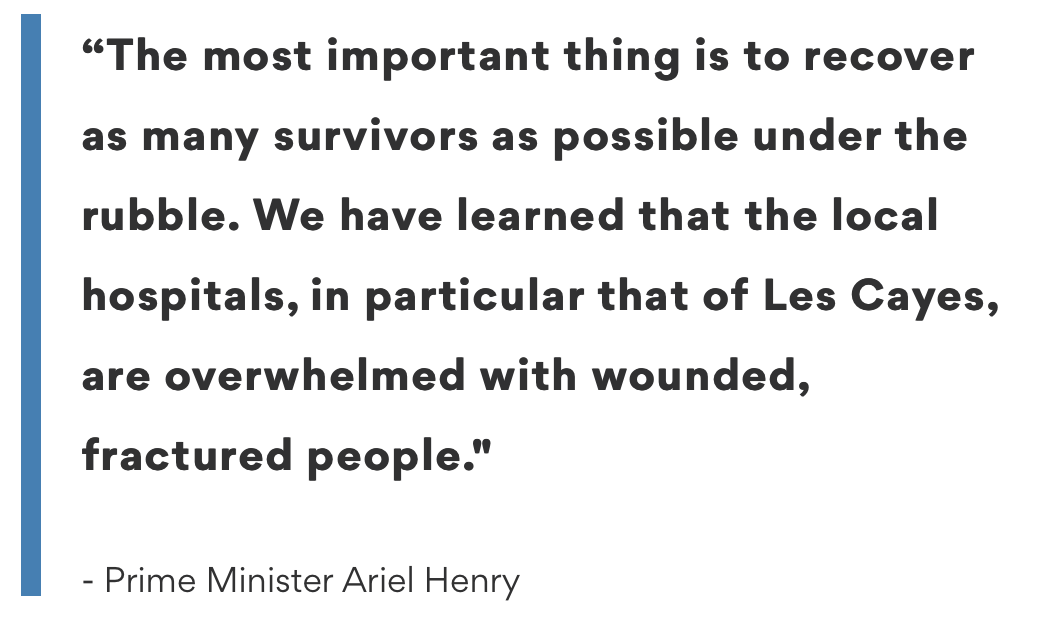 President Joe Biden and Vice President Kamala Harris received a briefing Saturday morning about the Haiti earthquake, according to the White House. Biden authorized an immediate response and named USAID Administrator Samantha Power as the senior official coordinating the effort.

Humanitarian workers said information about deaths and damage was slow coming to the capital because of spotty internet service. Also complicating relief efforts was gang activity in the seaside district of Martissant, just west of the Haitian capital.

“Nobody can travel through the area,” Ndiaga Seck, a UNICEF spokesman in Port-au-Prince, said by phone. “We can only fly over or take another route.”

Seck said UNICEF planned to send medical supplies to two hospitals in the south — in Les Cayes and Jeremie.

The reports of overwhelmed hospitals come as Haiti struggles with the pandemic and a lack of resources to deal with it. Just last month, the country of 11 million people received its first batch of U.S.-donated coronavirus vaccines, via a United Nations program for low-income countries.

Gabriel Fortune, a former Haitian senator, was found dead beneath the rubble of Hotel Le Manguier, according to reporter Frantz Duval.

People in the capital of Port-au-Prince felt the tremor and many rushed into the streets in fear, although there did not appear to be damage there.

Naomi Verneus, a 34-year-old resident of Port-au-Prince, said she was jolted awake by the earthquake and that her bed was shaking.

“I woke up and didn’t have time to put my shoes on. We lived the 2010 earthquake, and all I could do was run. I later remembered my two kids and my mother were still inside. My neighbor went in and told them to get out. We ran to the street,” Verneus said.

Paul Caruso, a geophysicist with the USGS, said aftershocks likely will continue for weeks or months, with the largest so far registering a magnitude 5.2.

Les Cayes residents and reporters shared video and photos on Twitter after the earthquake.

Hotel Le Manguier was destroyed in Les Cayes, according to a news outlet there.

Several fatalities have been confirmed in Beaumont, Haiti.

A video showed a collapsed building in Camp-Perrin, Haiti.

Most of the hotels and churches on the southern coast of Haiti were destroyed, Duval reported.

The Sacred Heart Church in Les Cayes was heavily damaged by the earthquake. 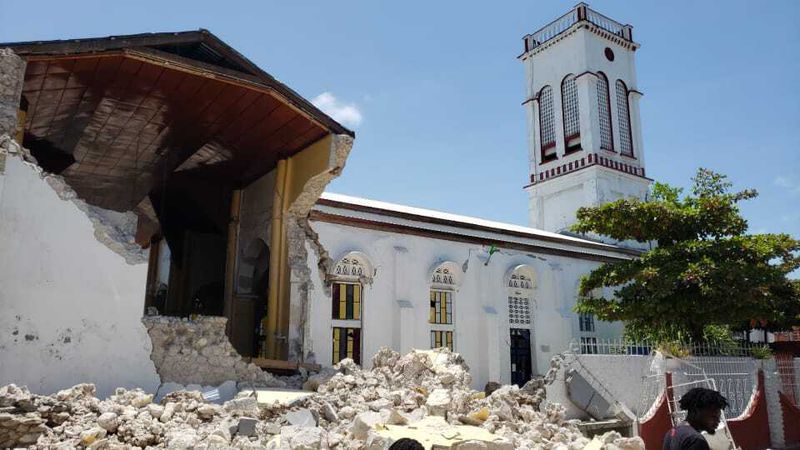 A tsunami threat was issued for Haiti by the U.S. Tsunami Warning System. There is no risk to the rest of the Caribbean coasts.

The impoverished country, where many live in tenuous circumstances, is vulnerable to earthquakes and hurricanes. It was struck by a magnitude 5.9 earthquake in 2018 that killed more than a dozen people, and a vastly larger magnitude 7.1 quake that damaged much of the capital in 2010 and killed an estimated 300,000 people.

The earthquake struck more than a month after President Jovenel Moïse was killed, sending the country into political chaos, and humanitarian aid groups said the earthquake will add to the suffering.

“We’re concerned that this earthquake is just one more crisis on top of what the country is already facing — including the worsening political stalemate after the president’s assassination, COVID and food insecurity,” said Jean-Wickens Merone, spokesman for World Vision Haiti.

Catholic priest Fredy Elie, who began working with the Mission in Haiti Congregation after the 2010 earthquake, told The Associated Press that access to the area is hindered by criminal gangs and was pleading for help.

“It’s time to open the road to those who want to help … They need help from all of us,” Elie said.

Rich Barak of The Atlanta Journal-Constitution contributed to this report.