Scientists also keeping an eye on 2 other flying rocks

An asteroid that is reportedly three times the size of the Statue of Liberty will zoom past Earth on Wednesday.

The giant hunk of rock, believed to be about 984 feet wide, is whooshing through space at 6 miles per second and is expected to pass within 93,000 miles of the planet, according to Newsweek, which cited a report by NASA’s Center for Near-Earth Object Studies.

Scientists are also keeping an eye on two other Near Earth Objects that will whiz past Earth at incredible speeds this week.

One is a much smaller asteroid — measuring about 128 feet wide — that will pass the planet Tuesday, traveling at 33,000 miles per hour, and much farther away at a distance of 1.8 million miles, Newsweek reported. The other — a 525-foot space rock — is expected to make a pass on Friday but will be 2.2 million miles away. 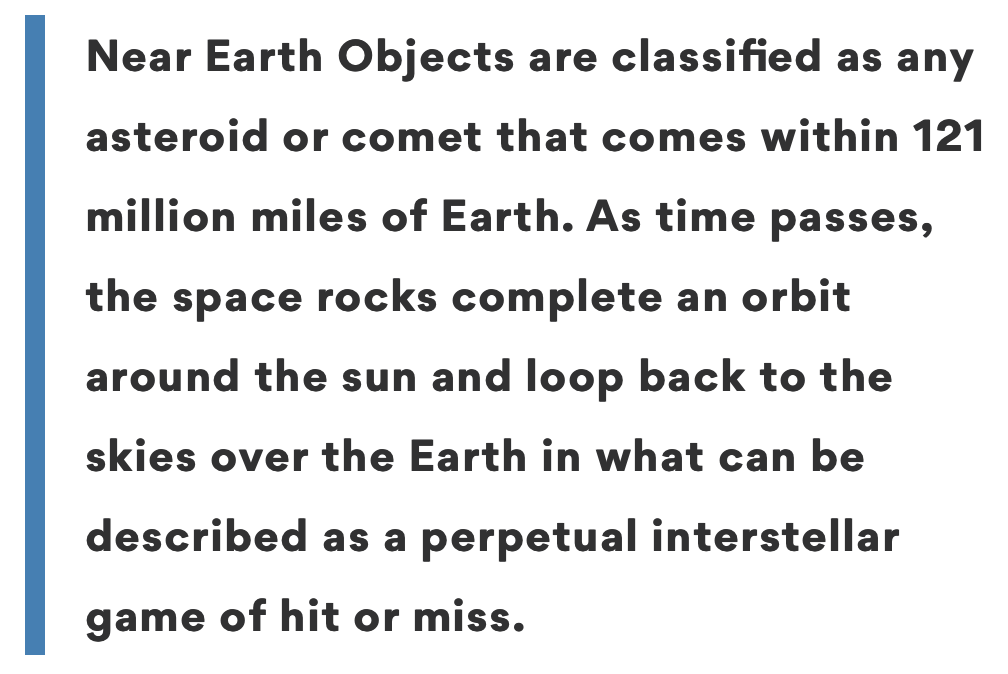 Although those are great distances, asteroids that are millions of miles away are still considered by scientists to be Near Earth Objects.

NEOs are classified as any asteroid or comet that comes within 121 million miles of Earth.

As time passes, the asteroids complete an orbit around the sun and return to the skies over the Earth in what can be described as a perpetual interstellar game of hit or miss.

More than 25,000 NEOs have been discovered since the late 1990s, one of which was found to have a trajectory that could cause it to collide with Earth in 2028, Newsweek reported.

One of the most threatening PHOs is an 1,100-foot-wide asteroid named Apophis. Recent calculations show Earth is safe from an impact by Apophis for at least the next century, but its next “fly-by” in April 2029 will be as close as 20,000 miles from our planet, Newsweek reported.