Health, In The News, Lifestyle

As we live longer, how should life change? There is a blueprint

Most children born in the developed world now have a good chance of making it to their 100th birthday. They are also on track to live, learn, work and retire in systems and institutions that were set up when their grandparents were children.

Career and education in the United States (and in much of the developed world) evolved to meet the needs of a different era than the one we currently live in — one in which the (mostly white and male) people who received postsecondary education completed it all in their 20s; in which people retired from work by age 65 and often died just a decade or so later; and in which half the population (the female one, of course) was expected to remain available full time for family caregiving needs.

But as improvements in infant mortality and health care added decades of life expectancy at birth — and, for the most well-off, many additional years of health in older age — lives in the developed world evolved faster than the institutions designed to support them, said Laura Carstensen, a psychology professor at Stanford University and the founding director of the Stanford Center on Longevity.

As a result, we’re spending these longer lives stressed out by the pressures of conforming to systems that don’t really fit — not in the later stage of life, or the decades that come before it.

“Humans are social creatures. We are very sensitive to culture, and the culture that we’re living in today is one that evolved around lives half as long,” she said. “It just doesn’t work. We need new sets of social scripts and norms that will accommodate much longer lives.”

Carstensen and her colleagues at the Center on Longevity are proposing a potential route out of this mess. This month, the center published a report titled “The New Map of Life” — a blueprint for what education, careers, cities and life transitions could look like if they were designed for lives that span a century (or more). 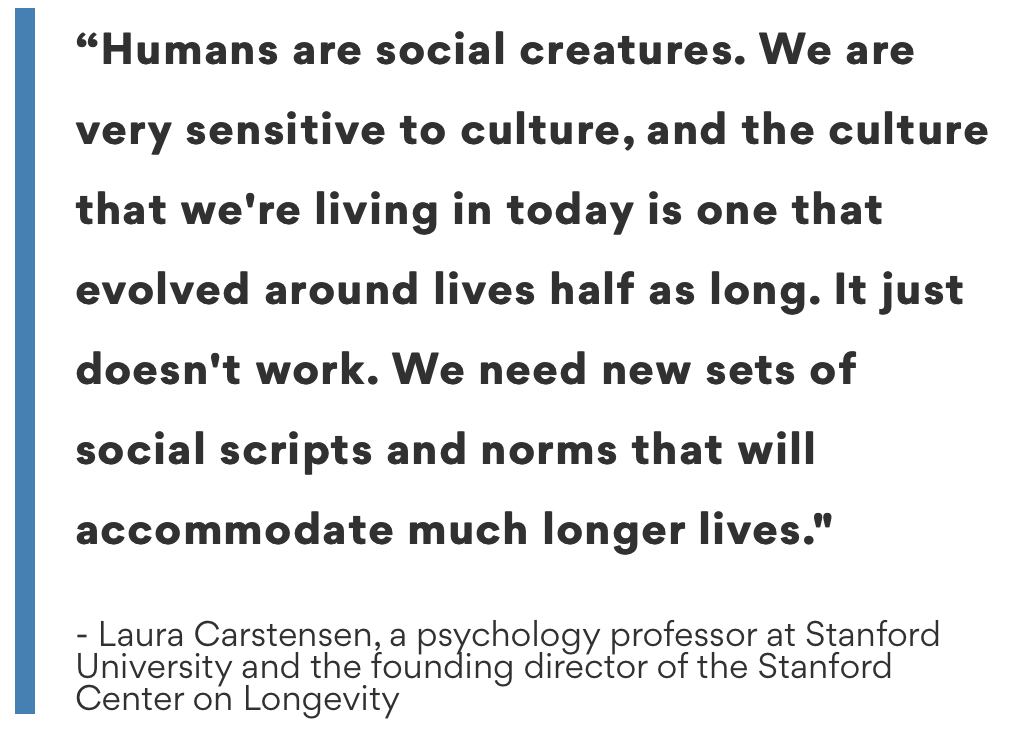 One of the report’s central theses is that modern life has a pacing problem. Middle age is uncomfortably crammed with career and caregiving responsibilities, while many older people find themselves with neither enough purpose, connection or income to live comfortably.

As of 2016, nearly half of households headed by a person 55 or older in the United States had no retirement savings, according to an estimate by the U.S. Government Accountability Office.

To even out the pace, “The New Map of Life” recommends that education be a lifelong project rather than a sprint crammed into childhood and early adulthood, and that careers be spread out so that people work for more years, but with fewer workdays in the week and fewer hours in the day.

The report also suggests more investment in early childhood, which it says would ultimately improve outcomes in every stage of life, and for normalizing and supporting transitions in and out of the workforce as people have children, care for vulnerable family members or endure illness.

“We need to stretch out life,” Carstensen said. “This is an enormous opportunity to improve quality of life at all ages.”

It took three years for the Stanford researchers to create the report. Changing ossified institutions and entrenched cultural expectations would take much longer.

“I think it’s water dripping on a stone,” said Andrew Scott, a consulting scholar at Stanford’s Center on Longevity.

There’s cultural precedence for reimagining the life span, Scott pointed out: the modern concept of both the teenage years and retirement as distinct phases of life emerged only in the last century.

For now, the kind of life course outlined in “The New Map of Life” — one in which people have access to multiple education and career opportunities, and reach old age with decent health and economic stability — is by no means a universal experience. Virtually every factor that contributes to longer, healthier lives — quality health care, sufficient nutrition, access to exercise and safe living conditions — is easier to obtain the wealthier you are.

And a 2015 study from the National Academies of Sciences found that nearly all life expectancy gains from people born in 1930 and 1960 went to people in the top 60% of the income distribution.

“Longer lives exacerbate inequality,” said Ilana Horwitz, a sociologist and assistant professor of Jewish Studies at Tulane University who was one of nine postdoctoral fellows at the Center on Longevity assigned to the project.

The report outlines how we might make aging, which is really just another word for living, a healthier and more equitable experience for all. The tricky part is convincing lawmakers, employers, educational institutions and the public to consider alternatives to some of our culture’s most deeply ingrained patterns.

The center is working now on appointing new research fellows who will study how to make these suggestions reality. A map becomes a lot more useful once you actually get moving.

“Life will change,” Carstensen said. “The hard thing is knowing what the first step should be. In many ways, we’re at the hardest part.”