The Strategic Organizing Center, which includes the Teamsters and CWA, sent a letter to the agency over the $8.45 billion studio acquisition, saying it would create “harmful vertical integration in the film industry at large.”

As the Federal Trade Commission examines Amazon’s proposed $8.45 billion buy of MGM, pressure from unions and progressive politicians is mounting on the regulator to take action, either by blocking the deal or requiring the company to abide by conditions such as decoupling Amazon Prime Video from the rest of Prime to secure approval.

The latest salvo comes from the Strategic Organizing Center, a federation of labor unions that includes the Communications Workers of America and the Teamsters. In a letter to be sent to FTC chair Lina Khan on Aug. 11, obtained by The Hollywood Reporter, SOC executive director Michael Zucker writes that the acquisition “would further bolster Amazon’s ability to leverage power across multiple lines of business related to the SVOD market and create further harmful vertical integration in the film industry at large” by leveraging its ecommerce prowess.

“If allowed, this merger would permit Amazon to inevitably impact producers and consumers of video content, squeezing diversity as it gains distribution market share and pricing power,” Zucker tells THR.

The union-led pressure campaign is not entirely surprising: SOC has focused on Amazon as it relates to treatment of warehouse workers and the pressure it applies on other industries. The WGA West, led by David A. Goodman, also has expressed its concerns with the acquisition, saying in a June 24 statement that Amazon’s proposed studio buy “illustrates the imminent need for greater scrutiny and reform.” And Sen. Elizabeth Warren wrote a June 29 letter to Khan raising many of the same issues as the SOC and WGA.

And yet, Amazon, now led by CEO Andy Jassy, is sending mixed messages about the acquisition, which is its second largest after Whole Foods. On the one hand, the company is telling Wall Street that the acquisition is not a big deal. MGM never came up on the company’s latest earnings call, and Amazon never filed a form 8-K with the SEC after the deal was announced. Companies are required to file 8-Ks for deals that are “material” to their businesses, thus Amazon is suggesting that MGM simply didn’t rise to that level.

Yet the company has gone nuclear in its fight with the FTC, sending a letter June 30 demanding that Khan recuse herself from all matters involving Amazon, stemming from her work as a writer, congressional staffer and academic. Amazon wrote that Khan “has on numerous occasions argued that Amazon is guilty of antitrust violations and should be broken up. These statements convey to any reasonable observer the clear impression that she has already made up her mind about many material facts relevant to Amazon’s antitrust culpability.”

But, assuming Khan does not recuse, Amazon will need to decide whether to dig in and fight or live in a new regulatory environment. Zucker adds, “We hope the FTC will see the handwriting is on the wall here. The only question is whether regulators read it and act on it.” 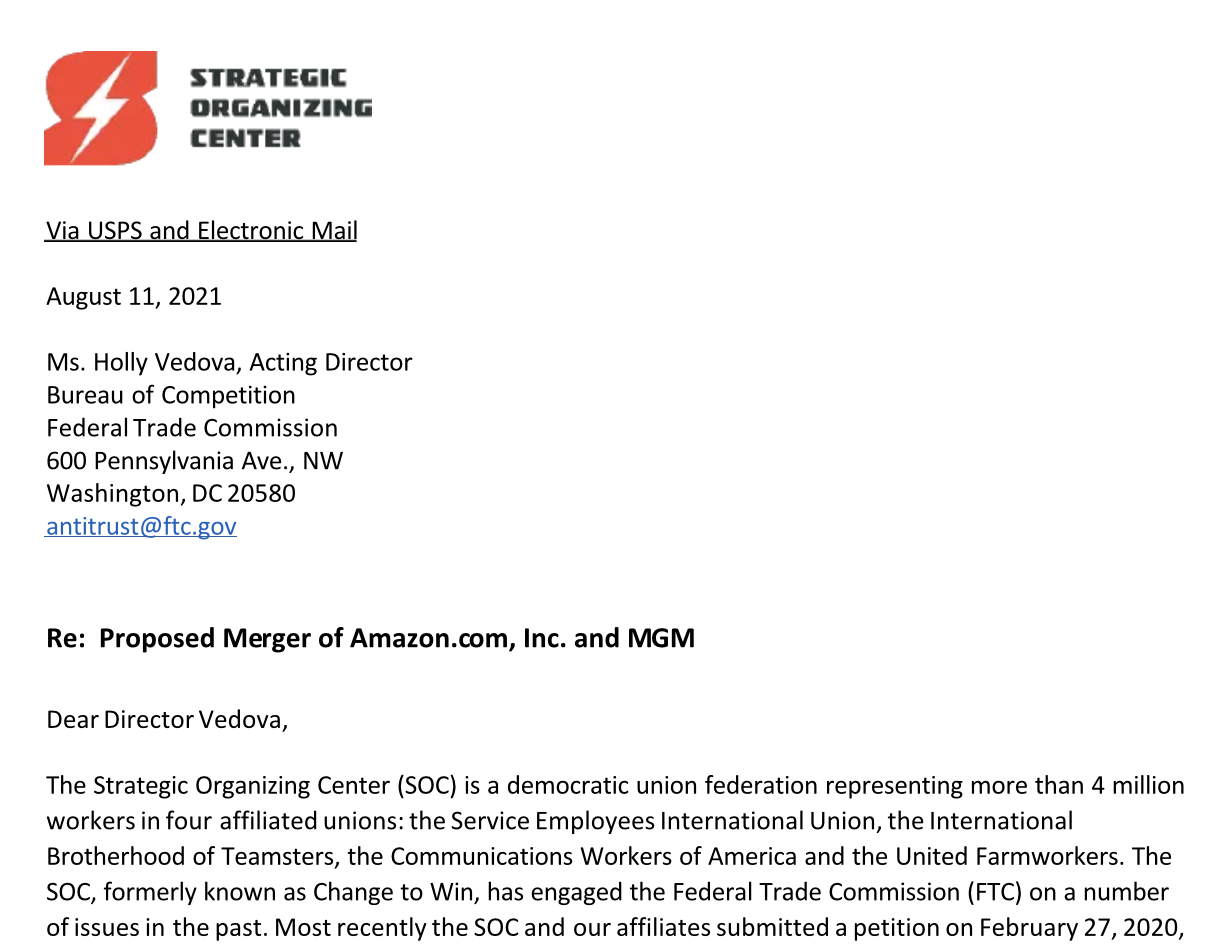