New York (CNN Business)Four years after Amazon bought Whole Foods, the e-commerce giant is making another major push to sell shoppers groceries. But this time, Whole Foods isn’t the focus of the strategy.

Instead, Amazon is ramping up openings of Amazon Fresh grocery stores. Amazon has opened 11 Fresh locations around the United States over the past year. It will open a 12th Thursday in Long Beach, California, and Amazon says it has plans to open an additional four stores, although it has not given a timetable. Grocery analysts expect that the company will add more beyond that.

The online retailer isn’t just making those moves because it wants a bigger chunk of the US grocery business. Amazon hopes that Fresh stores will help the company gain more of Amazon Prime members’ spending on groceries, thereby increasing loyalty to the subscription program. It also wants to attract new sign-ups.

Amazon is building Fresh stores to chase a different clientele than Whole Foods’ well-defined customer base, analysts say. Whole Foods, which has around 500 US stores, primarily appeals to wealthier shoppers and specializes in natural and organic products. It doesn’t carry national brands like Coca-Cola, Tide and Oreo.

Amazon’s new Fresh concept has lower prices than Whole Foods and a wider selection of mainstream brands. It is targeted at lower and middle-income shoppers who don’t frequent Whole Foods, as well as higher-income customers hunting for deals, say analysts.

Amazon “wanted to open up something that would have broader appeal and be able to carry all those conventional products that aren’t going to be at Whole Foods,” Mushkin said.

Amazon (AMZN), so far, has opened Fresh stores in California and Illinois. It also plans to open two in New Jersey. Most of the stores are slightly smaller than traditional Whole Foods stores and are located in densely-populated suburban markets, according to Bill Bishop, an analyst at consulting firm Brick Meets Click. Many of the stores are in vacated former retail sites, a cheaper option than building a new store from the ground up, according to Bishop.

Amazon’s “goal is to build a substantial base of digitally-connected customers, and they are not going to build that base off Whole Foods because it’s a niche business,” he said. Fresh stores are “leaning toward price as an appeal” for customers, he said. Low prices are not the main draw with Whole Foods, he said, referencing “Whole Paycheck” — the label frequently attached to Whole Foods.

Whole Foods did not respond to request for comment.

Store locations and layout are designed to make it more efficient for workers to pick customers’ online orders and hustle them out for same-day delivery than traditional stores, said Jordan Berke, CEO of Tomorrow Retail Consulting and a former executive at Walmart. Whole Foods stores were designed for in-store shopping and are not as well equipped to handle online orders, he said. 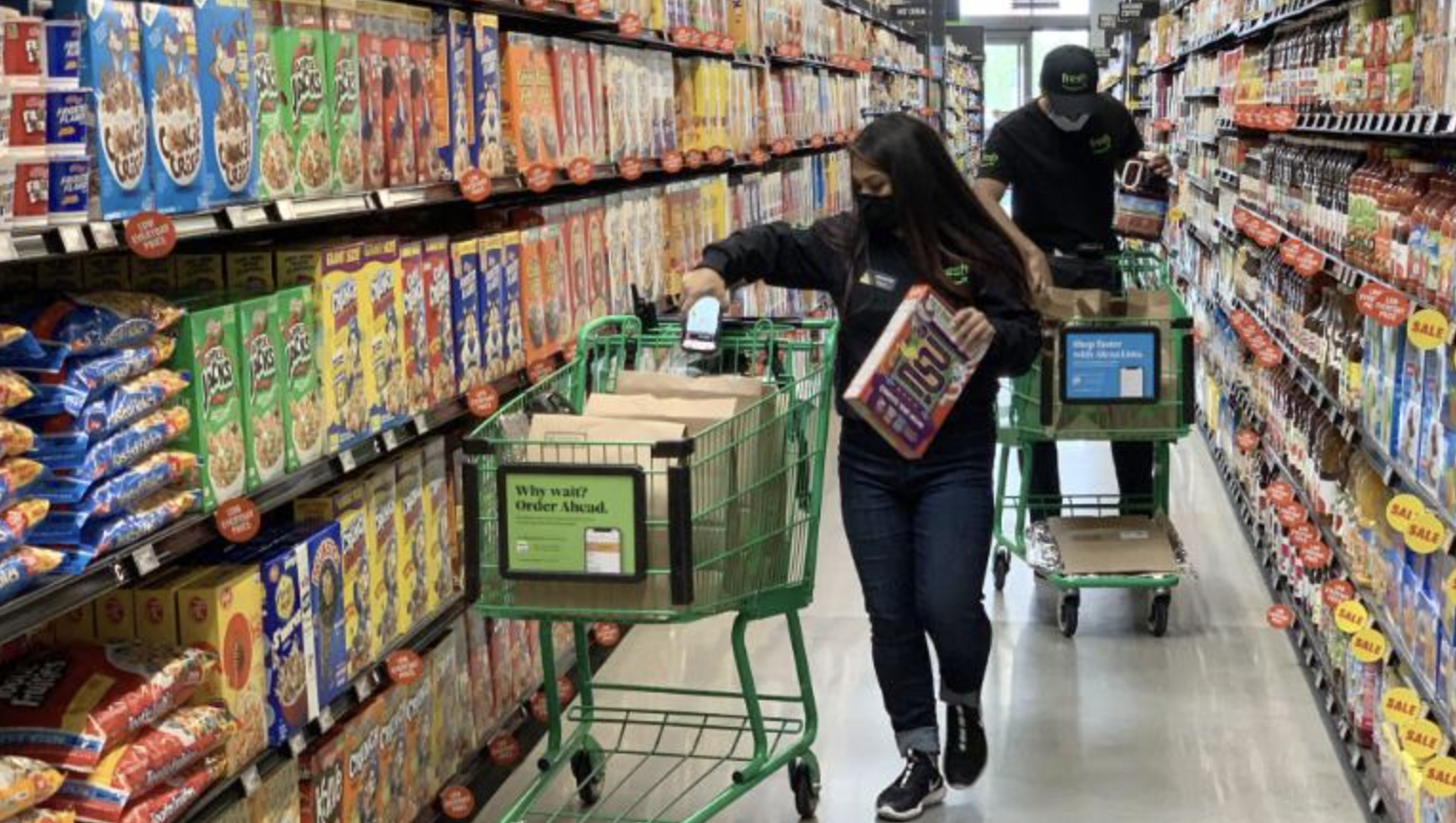 Amazon Fresh stores have lower prices than Whole Foods and a wider selection of mainstream brands.

“This is a retail concept that was designed from day one to be equally effective serving online demand as it does in-store demand,” Berke said. “Amazon understands that the best model to winning the future of grocery is to have a physical location in the vicinity of customers. That allows for rapid online fulfillment.”

Amazon is deploying technology in the stores to speed up checkouts and help customers find items. Amazon “wants to create a perception of innovation around this format,” Berke said.

Stationed throughout the stores are Amazon Echo Show smart displays that can summon Amazon’s virtual helper, Alexa, which can help answer customers’ queries such as, “Where can I find the mayonnaise?”

Stores also have the Amazon Dash Cart, a shopping cart that scans groceries, links to online shopping lists, and doubles as a checkout stand. The “smart cart” resembles a one-basket convenience cart and is equipped with bar code readers, sensors and scales. After using their Amazon app to effectively log into the cart, customers place one or two shopping bags in the basket. The cart can scan items with a bar code and weigh barcode-less products such as produce.

Customers then exit through a specific sensor-enabled lane that automatically charges the credit card on their Amazon account. The Amazon Fresh stores do have traditional checkouts and cashiers for customers who opt to not use the Dash Cart or who have larger grocery trips.