If you need a full-featured Alexa smart screen, get a bigger Echo Show 8. But if all you want is an inexpensive Alexa speaker, spring for an Echo Show 5.

Of all the various Alexa devices, none seems so misunderstood as the lowly Echo Show 5, which Amazon updated last week with a better camera and another color option — blue ($85 when not on sale — a $5 decrease from the previous generation; it’s £75 in the UK and currently unavailable in Australia). It’s doubtful even the new chameleon-skinned Echo Show Kids ($95 when not on sale) will be enough to elevate Amazon’s 5-inch smart display much beyond an afterthought in the minds of the Alexa faithful. And that’s a shame.

It’s not the Show 5’s fault — its much bigger sibling, the midsized Echo Show 8, and its even larger kin, the whirly, twirly Echo Show 10, both easily (and justifiably) hog all the Alexa limelight. Then, of course, there’s the competition — Google’s slightly bigger 7-inch Nest Hub, with its dazzling screen and more intuitive smart home controls. The only other, similar device that the Echo Show 5 clearly outshines is the even more maligned Lenovo Smart Clock, which relies on Google Assistant and can’t even play videos (although, to be fair, who would want to on such a small screen?).

Which is why, to get a sense of the cellphone-sized Echo Show 5’s true value, it needs to be pulled out of the smart screen lineup that includes Echo Shows and Nest Hubs and placed alongside smart speakers, like the Echo Dot, Dot with Clock and Google’s Nest Mini. If you’re in the market for a full-featured smart screen — for your kitchen, say, to look for recipes and make video calls — you can go ahead and dismiss the Echo Show 5 out of hand. A bigger screen with a better camera will be worth spending a little more if you’re going to use it a lot.

But if you’re thinking about adding relatively inexpensive Alexa access to one or more rooms — and have been eyeing a fourth-gen Echo Dot — there’s a compelling case to be made for getting an Echo Show 5 instead.

First, let’s dispense with the updates Amazon made to the second-generation Echo Show 5 (I’ll get to the Kids model in a bit). The takeaway here is that the updates are so minimal, the best thing to come out of the second-gen Echo Show 5 will likely be the long tail of great discounts you’ll find on remaining first-gen devices.

The most significant change is in the camera — it’s been bumped from 1 to 2 megapixels. While that represents a doubling of performance, it’s still a camera spec you’d find on decade-old flip phones.

The Echo Show 5 now also comes in blue, but — to be brutally honest — it’s an awful shade of navy blue. It’s so dark, in fact, I didn’t realize the test device Amazon sent was actually a blue one until a good hour or so after I set it up.

But that’s it. Oh, except there’s no longer a stereo out (aka, aux) port on the back, which to be even more brutally honest, only makes the value of the first-gen Show 5 go up even further, if you ever plan to plug it into a traditional stereo system.

What the Echo Show 5 gets right

One more time — if you care about camera specs, for whatever reason, get a better device. But if you don’t — if you just want another smallish Alexa speaker in your house, instead of an Echo Dot or Echo Dot with Clock, you should consider getting an Echo Show 5, especially if you can score one for under $50. That’s the everyday retail price of the Echo Dot when it’s not on sale — the Echo Dot with Clock will run you $10 more, at $60.

For one, both generations of the Echo Show 5 have essentially the same 1.6-inch full-range speaker as fourth-gen Echo Dots, which is a noticeable improvement over the third-gen Echo Dot’s 1.1-inch speaker. The Echo Show 5 sounds more or less identical to an Echo Dot when playing music and podcasts or even just Alexa’s voice responses.

While both the third- and fourth-gen full-sized Amazon Echo do sound better with their 3-inch woofers and 0.8-inch tweeters, those bigger Alexa speakers typically command twice the price of the Echo Dot, whether on sale or not (at which point there’s an equally compelling case for the Echo Show 8, but that’s another story).

Basically, you get sound quality that’s just as good, plus a 5-inch screen and a camera.

But what if you don’t want a camera?

Fair enough — some people are (justifiably) sketched out by an always-on smart device with a camera. Amazon seems to know this, so the second-gen Echo Show 5 has a physical camera shutter, just like the first one (the camera also has a software kill switch that activates when the microphone is muted). 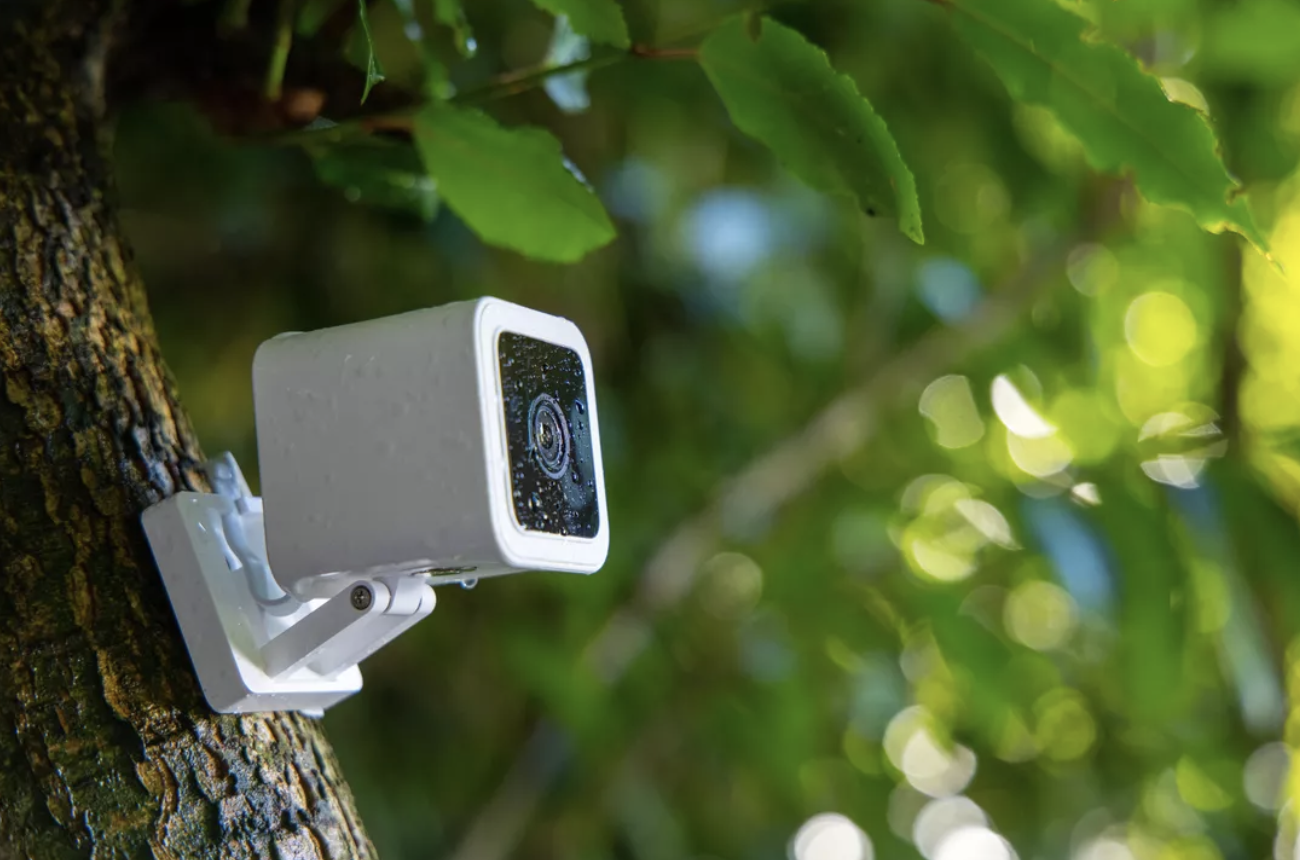 But that camera can do more than take selfies — thanks to a recent firmware update, you can now enable Home Monitoring, which lets you view your Echo Show camera feed from a mobile device. Sort of like a security camera, but you can’t record or save video to the cloud.

And speaking of security — that screen can be linked with a bona fide security camera, like those from Amazon-owned Ring or certain third-party device makers like Wyze. So, you can check your security camera feed from your bedside device when things go bump in the night. But that’s not all the Echo Show 5’s screen is good for.

The Show 5’s screen is small but not useless

The Echo Show 5 may have a screen about the size of your smartphone — maybe even a little smaller — but that doesn’t mean it’s not good for a few things your smartphone isn’t. It works great as a photo frame — all you have to do is link Amazon Photos (free for Prime members) and you can sync whatever photos you want from your phone to your Echo device. 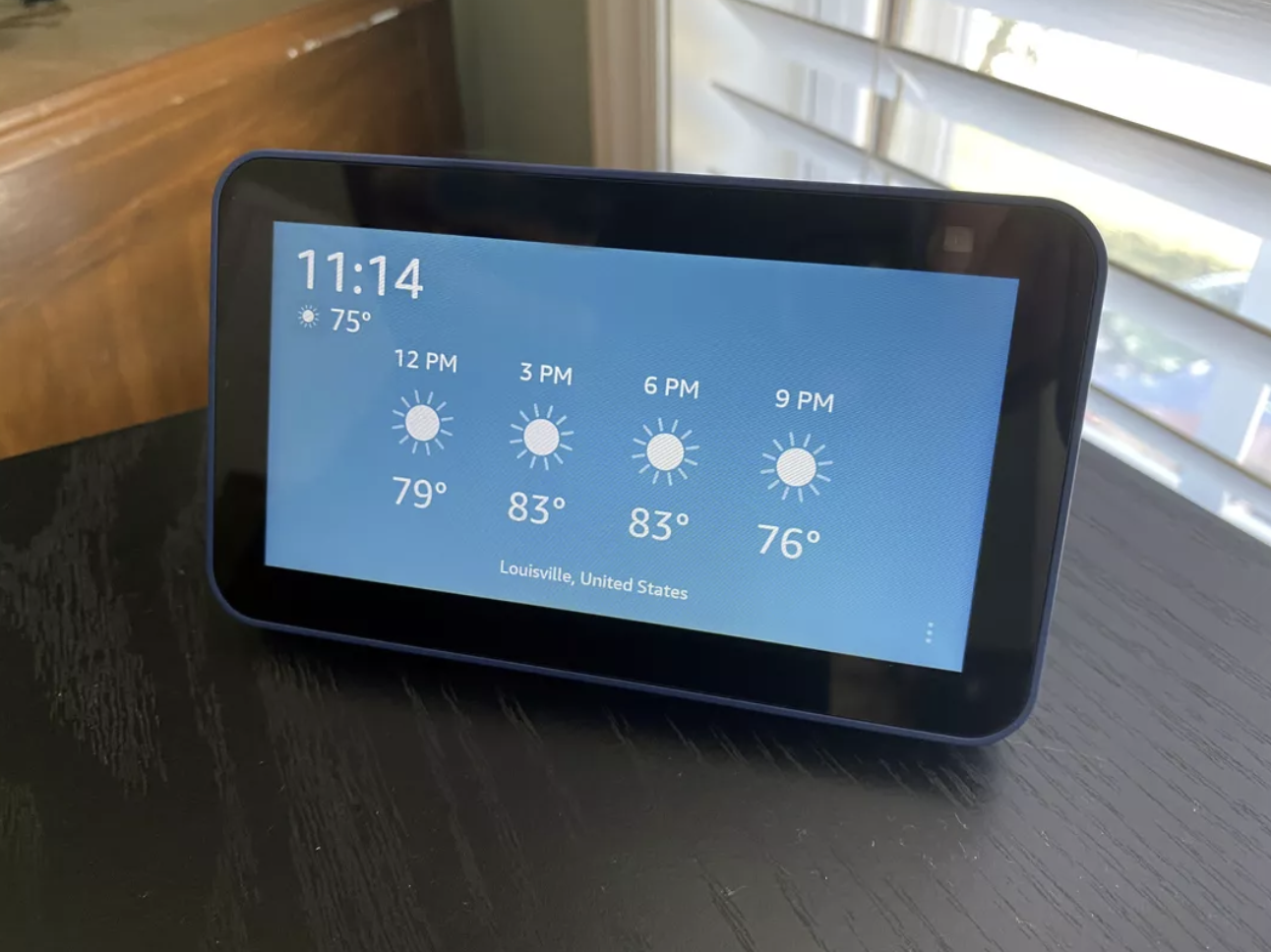 Sure, the photos are small, but it’s still really nice to have an always-rotating series of pictures of family and friends on your desk, nightstand or accent table. You’re only going to look for a second or two anyway — it’s not like the experience would be a lot better in HD.

Even if you don’t want to use an Echo Show 5 as a digital photo frame, if nothing else, the 5-inch display offers plenty of room to see the time and weather information it can display — even from across the room.

If you have the option between the Echo Dot (or Echo Dot with Clock) and the identical-sounding Echo Show 5 for roughly the same price (but with a screen!) why not go with the screen? For all of the quality-of-life improvement introduced with the Echo Dot with Clock, at the end of the day it’s still a dinky little LED display (that doesn’t even tell you the weather). 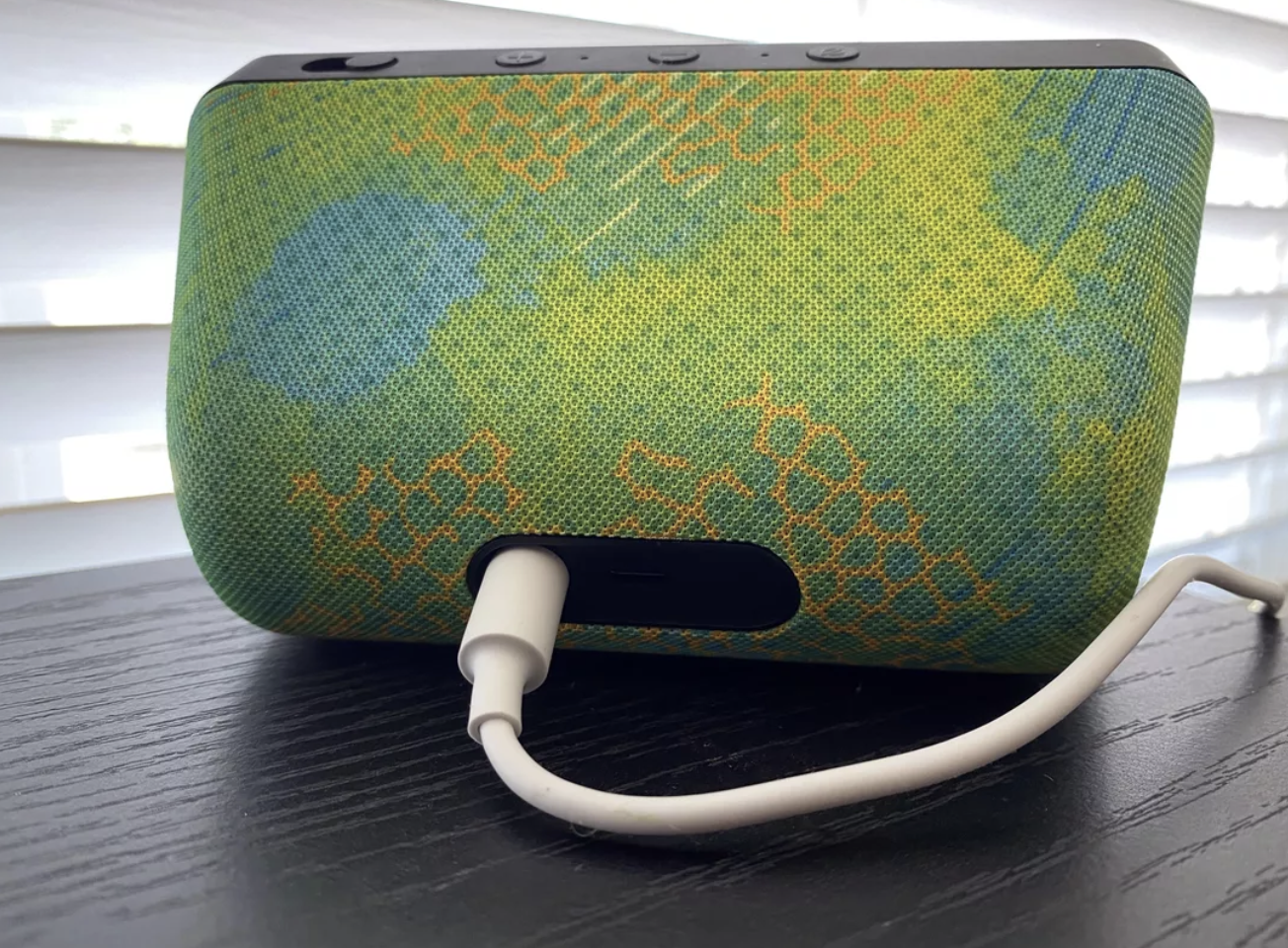 Echo Show Kids is in a category of its own

Although Amazon’s Kids devices see less frequent discounts than the regular Echo smart speakers and displays, the case for buying an Echo Show Kids is similar. There’s already an Echo Dot refashioned as Echo Kids ($60 full retail), which comes dressed up like either a tiger or a panda bear with a free year of Amazon Kids Plus (a $36 value, at $3 per month). The Kids Plus service delivers kid-oriented stories, games and educational programing and is included with the Echo Show Kids ($95 full retail) as well. (It’s not yet available in the UK or Australia.)

The Echo Show Kids currently only comes in one skin — a chameleon design with a corresponding clock face that actually matches really well, despite the device’s monstrous bezels. For all Kids-branded devices, Amazon doubles its usual warranty period to two years and adds coverage for accidental breakage, so if that screen ever does break (in the first two years), Amazon will replace it, no questions asked.

Granted, without the kind of discounts Amazon routinely offers on other Echo devices, it’s a much bigger step up from the $60 Kids smart speaker to the $95 Kids smart display, but the investment will pay dividends when you see how much more engaged your kid may be with the extra visual element. 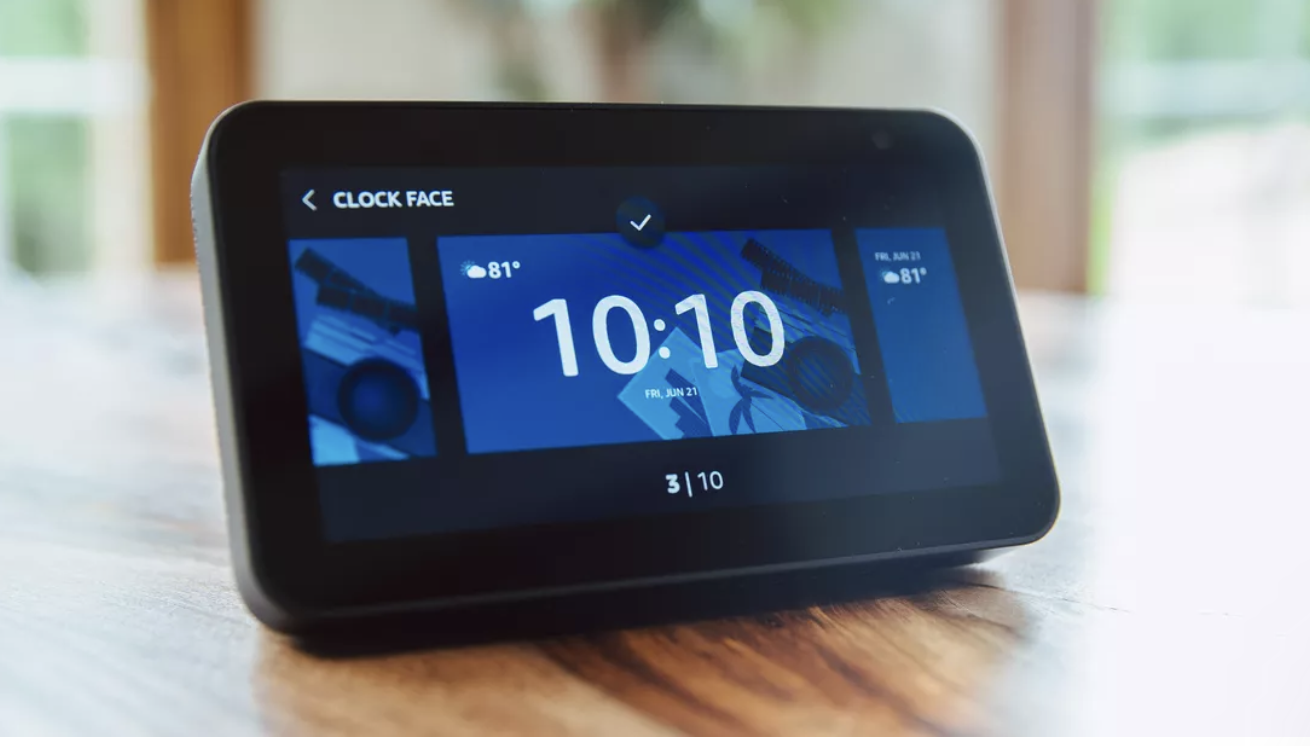 Ultimately, get whichever generation is on sale

This is the first Echo Show 5 to offer a Kids edition, so unfortunately there’s no first-gen to go on sale. But let me let you in on a little secret — you can turn anyEcho device into an Echo Kids device by simply swiping down from the top of the screen, tapping Settings then FreeTime (that’s what Kids Plus used to be called) and toggling the feature on.

Granted, you won’t get the free year of Kids Plus or an extra warranty, nor will your device suddenly turn into a tiger, panda or chameleon on the outside. But in all other respects — the kid-friendly clock faces, parental controls — you’ll have a Kids edition. And if you can score a first-gen for more than $36 less than the Echo Show Kids, well — you can use the savings to subscribe to Kids Plus for a year and still come out ahead (or don’t — and save all the money).

But if you don’t have kids (or do, but no interest in a Kids edition Echo Show), you should start watching the price of the original Echo Show 5 like a hawk. With Prime Day just around the corner, it’s almost guaranteed to drop in price, possibly below even the current offer of $45 (at time of publication).

Before the most recent update, the first-gen Echo Show 5 was already a viable alternative (and improvement!) to the Echo Dot or Dot with Clock. Now it’s practically a no-brainer.