The 13,000-square-foot house includes eight bedrooms and 10 bathrooms and sits on 7.5 acres.

After nearly 20 years in residence, powerhouse ex-talent agent Adam Venit and his wife Trina are leaving their playful 90210 digs, on to new residential pastures. Sited in the Bella Vista guard-gated community high above Beverly Hills, their giant mansion now sports a list price that’s just a few hairs under $40 million — not surprising considering every inch of the Mediterranean-meets-contemporary behemoth was gutted and resculpted during the Venits’ ownership. The nearly 8-acre spread was photographed for The Hollywood Reporter in 2017.

As a primary architect of the movie business at William Morris Endeavor (WME), Venit rose to become a titan among Hollywood talent agents, with an enviable client list that included Gal Gadot, Michael B. Jordan, Sylvester Stallone, Vince Vaughn, Steve Martin and Shawn Levy. Until late 2017, that is, when a highly publicized sexual assault scandal saw actor Terry Crews sue WME, accusing Venit of groping his genitals at a party. (WME settled the Crews suit in 2018; Venit departed the agency shortly thereafter.)

Of course, it comes as no shock to Tinseltown that the Venits have decided to sell. Back in March, Adam filed for divorce from Trina, who has already found a new solo home for herself; in May, the philanthropist and producer paid $7.8 million for a glassy contemporary high above L.A.’s iconic Sunset Strip. The erstwhile couple will presumably split the proceeds from their former marital mansion, which was built in 2002 on speculation and sold to the Venits for $6.6 million in early 2003. Adam himself admits that, at the time, the place was “a big white box. It was built like a McMansion.”

But the 90210 estate of today is very different than the 2003-era one. Back then, the house was a hulking Tuscan-style beast with dated and drab interiors, all beige and brown. The fun-loving pair wanted something more colorful, so they — with the help of Abramson Teiger Architects and designer Lara Fishman of Storm Interiors — gutted the entire house and ripped out the pool and nearly every shrub of landscaping, resculpting it into a contemporary showpiece that’s perhaps best described as a Bali-style resort meets Alice in Wonderland.

The Venits also added a 2,000-square-foot wing to the house, where you’ll find a media room with a 100-inch TV and vaulted ceiling covered in acoustic wood panels arranged in a puzzle scheme, plus a very green and apartment-sized office for Adam.

Highlights are myriad but notable standouts include an emerald-green powder room coated in peacock feathers — yes, real feathers from a peacock — a yoga room and a separate gym. There are black chandeliers, blue chandeliers and a mammoth kitchen with an imported La Cornue range. The upstairs master suite has a private balcony with its own succulent garden and sunset views overlooking all of Beverly Crest. 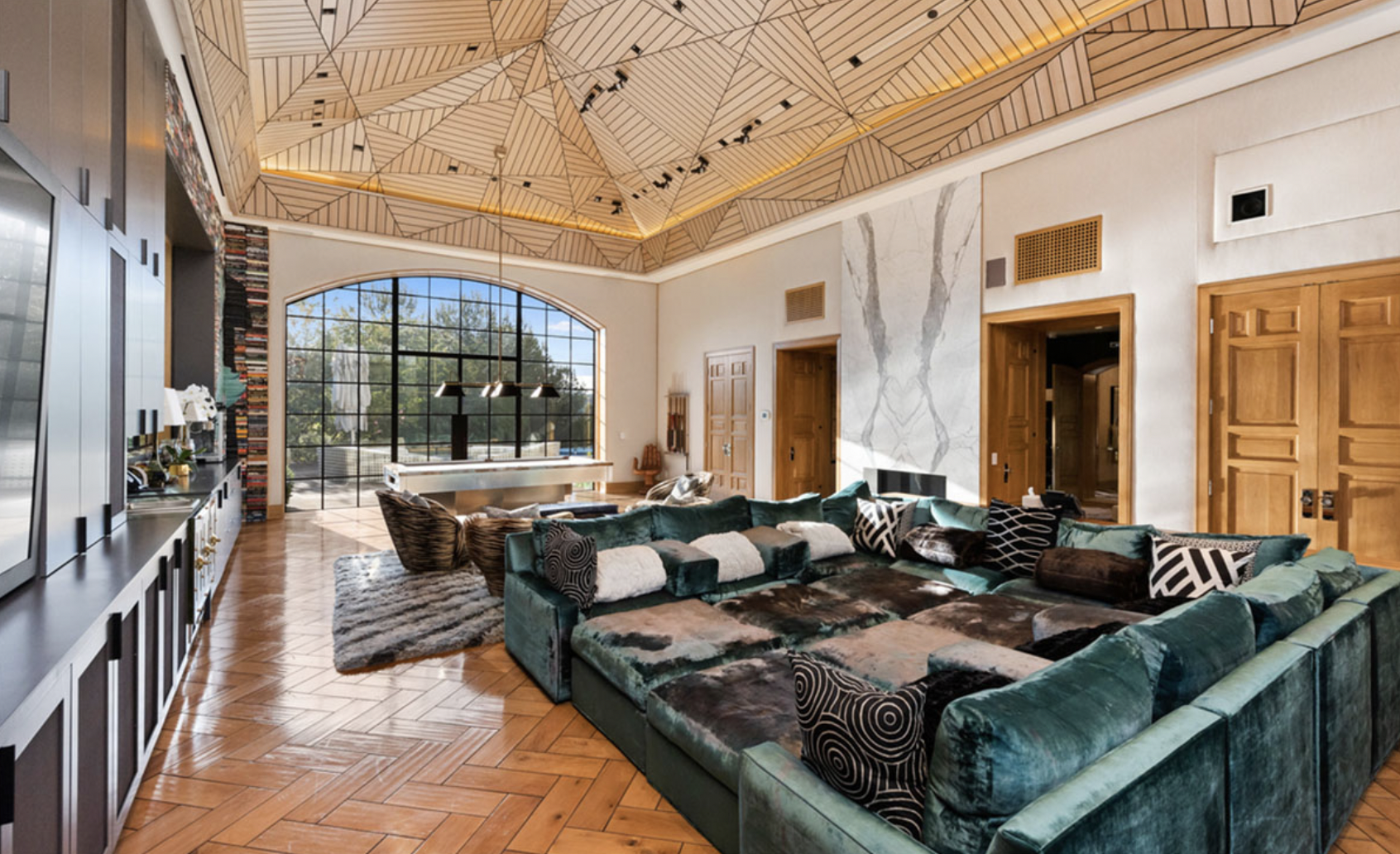 Out back, rather than the typical pergola, there’s a bronze tree-shaped sculpture shading the full outdoor kitchen, complete with lights and misters. A metal mesh curtain surrounds the loggia, keeping the glaring sun out of visiting eyes. The zero-edge infinity pool is a work of art and an engineering marvel, too, as it’s supported by 18 16-foot concrete pilings driven deep into the ground.

In addition to the main property with its mansion and pool, the 7.6-acre lot also includes land directly across the street, which the Venits have transformed into a gated wonderland with a lighted sports court and separate playground. The couple have said other nearby homeowners are welcome to use the park-like property — their neighbors include Ashton Kutcher and Mila Kunis, whose new modern farmhouse in Bella Vista was recently photographed for Architectural Digest. There’s also at least one Saudi Prince, plus billionaire Don Hankey and Samsung heir (and Parasite movie producer) Jay Lee.

Due to the 24/7 guard service and because there are less than a dozen homeowners in the enclave, Bella Vista association dues are unsurprisingly hefty. Besides the $40 million ask (and the corresponding property taxes) potential Venit estate buyers must be prepared to shell out a whopping $3,333 in monthly HOA fees.

Josh and Matt Altman of the Altman Brothers Team at Douglas Elliman hold the listing.