Jonathan Jones will be happy to spend his first “official” Father’s Day just sitting on the couch and holding his daughters. “I don’t need anything else,” he said. “I’m honestly good.”

That’s because he spent eight months living at and working from the Heart Center at Children’s Healthcare of Atlanta while his twins, Ava and Averie, recovered from heart surgeries.

Jonathan and Briena Jones had just celebrated their first wedding anniversary when they learned they were pregnant. Briena Jones brought two daughters from a previous marriage with her, and her new husband joked it would be fun to have twins.

“And then we went to the ultrasound, and (the sonographer) was like ‘Uh, there’s two in there,’ and my wife wasn’t too happy about my joke,” Jonathan Jones said.

Briena Jones added: “The sonographer was like, ‘You see this? This baby? That’s one baby. And do you see this? That’s a second baby.’ And I screamed, I probably screamed until the time that I got home.”

“I have video,” her husband said.

As the pregnancy progressed, however, the couple had less to laugh about. Ava was diagnosed in utero with Down syndrome and a congenital heart defect.

“It was first a feeling of anxiousness and nervousness, because we didn’t know what to expect,” Jonathan Jones said. “We had to do a lot of research, a lot of hard conversations with each other on confidence in each other.”

After the initial shock of the diagnosis wore off, Briena Jones said, “I was excited to have them, to see them grow.”

The parents got to see their daughters earlier than planned, however. On Sept. 4, Ava began losing proper blood flow through the placenta. The twins had to be delivered at 33 weeks of gestational age. 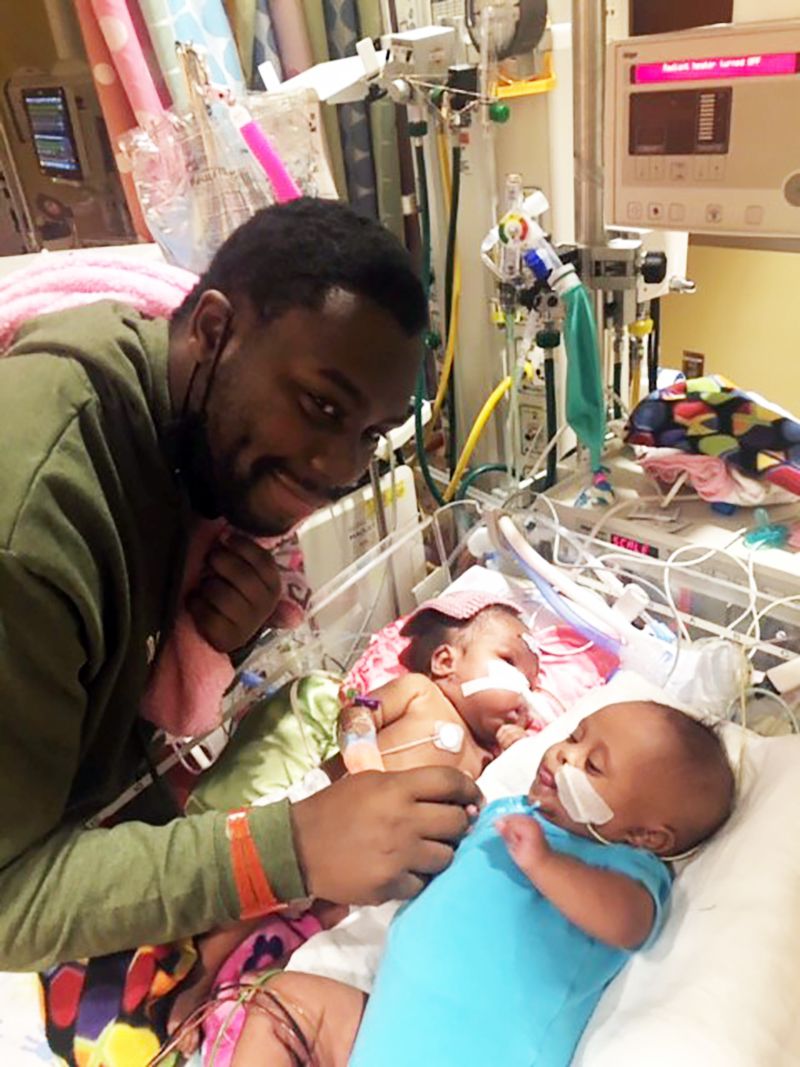 Four days after birth, Averie was brought to the Heart Center at Children’s.

Truncus arteriosus occurs when the blood vessel coming out of the heart in the developing baby fails to separate completely during development, leaving a connection between the aorta and pulmonary artery.

That one artery is “supplying to the body and the lungs at the same time,” Dr. Subhadra Shashidharan said. “So it’s very hard to regulate the circulation after a certain timeframe. Especially after the first week of life, there is a lot of heart failure, so it becomes a surgical urgency for us to address it.”

Dr. Subi, as she is known to patients and colleagues, is a pediatric cardiothoracic surgeon for the Heart Center, and she performed Averie’s surgery.

Although most truncus surgeries are done in the first week after birth, Dr. Subi was able to wait until Averie was about 6 weeks old. “She’s actually one of the unique ones,” she said.

“I did not operate on her immediately after for two main reasons. One, she was born pretty premature. And when they’re born that way, they’re a little bit protected in the sense that their resistances in the lung haven’t gone down. It takes usually one week after birth, and the resistance in the lung drops to the point that a lot of blood goes down that street. Number two, she had a couple of episodes of pneumonia early on in her life and lung disease associated with prematurity and pneumonia. Those things were actually protective to the point that we were able to operate on her, if I’m not wrong, if my memory is correct, six weeks from her birth. Yeah, it’s not the usual.”

Ava’s heart – with the more common atrial septal defect – was then operated on by pediatric cardiothoracic surgeon Dr. Fawwaz Shaw. 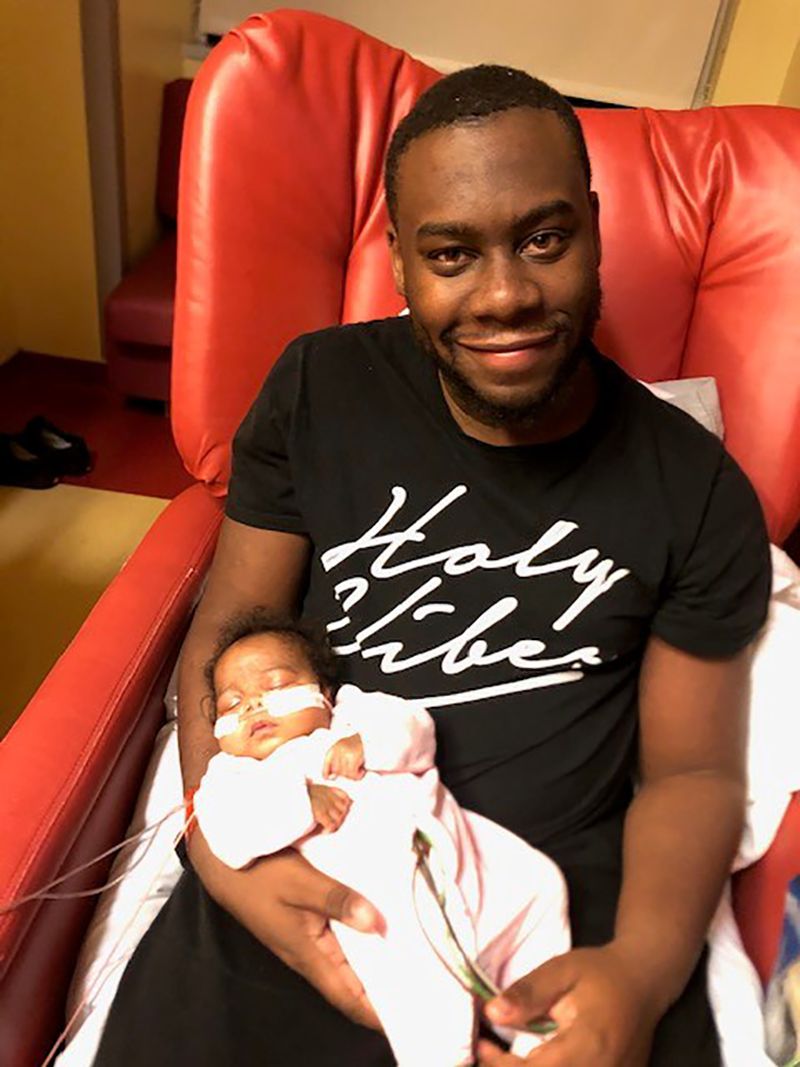 Home away from home

With two daughters in Savannah and two in Children’s, Jonathan and Briena Jones needed a game plan.

Dad had been living and working from an Atlanta hotel to be near Averie, and both parents were traveling to and from Savannah to be there for their other children. Ava’s care team in Savannah recommended she be moved to Children’s, too, so she could undergo the cardiac surgery she needed. So Jonathan drove to Savannah to get Ava and bring her to her sister. While there, Averie had a health scare.

Sometimes, however, dad would be in too much of a rush to get work done. “We would make sure he was fed,” said Madi LIcata, one of the twins’ primary pediatric nurses in the Cardiac Intensive Care Unit. “I always joked with him that I would have to remind him to eat lunch because a lot of days he would get so caught up in wanting to finish work so he could hold Averie as soon as possible.”

“He was working the entire time,” Licata added. “I mean, he had his entire work set up in the ICU.”

She added: “He was here day in and day out. He would actually drive to Savannah and back here in one day just to go get something from home, to spend as much time as possible with his girls. The whole team was just astonished by how strong he was through everything. You know, staying in a hospital for that long in exhausting, but he slept in a reclining chair every night and never complained about it.

“He would do anything to be by their side, even when they were so critically ill that maybe he couldn’t even tell if they knew he was there. He just wanted to be there.”

“Children’s was amazing,” Jonathan Jones said, “and I’m grateful for all of the doctors, all the nurses, the custodians, the security — everybody would check up on us. It really felt like a family.” 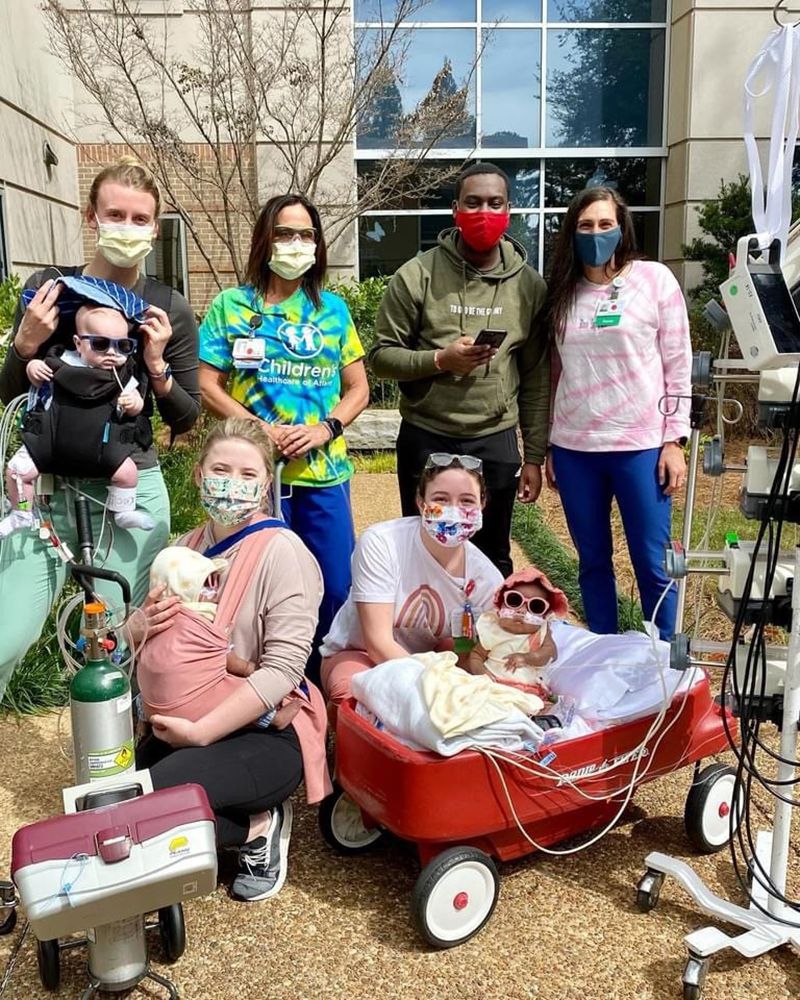 After eight months of working, sleeping and eating at the hospital, the family is finally together — and the big sisters are very happy.

Mariah, 13, and Maddison, 12, lost their dad a few years earlier, so having their baby sisters on life support was “pretty rough,” Briena Jones said. 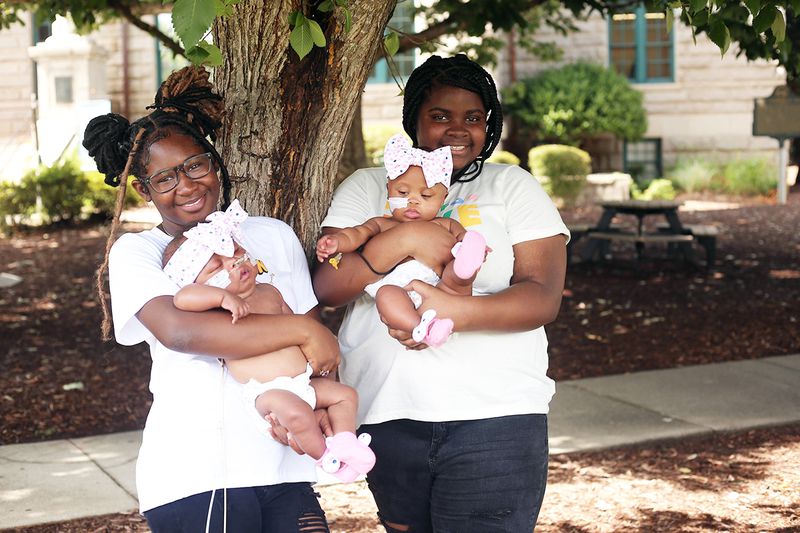 “It was rough for us for a while, not having mom home and not having any consistency,” she said. Because Briena was driving to Atlanta whenever possible, the older girls “were staying with an aunt and then they were staying with grandparents, and it was rough. But now that the girls are home, the big girls love them. They fight over who gets which baby. They kind of have this running joke: “This is my baby.” But yeah, they’re handling it much better now that they’re home and they can actually love on them.”