The first plug-in hybrid from AMG uses a twin-turbo 4.0-liter V-8 and an electric motor on the rear axle, and it’ll arrive in the U.S. for the 2023 model year.

Mercedes-AMG has just revealed the first in its new product lineup of E Performance plug-in-hybrids. It’s called the GT63 S E Performance. It will be joined soon by other AMG PHEVs, including the next top AMG C-class. For now, the GT63 S is the most powerful AMG road car yet—but only until the 1000-plus-hp One arrives.

The new model uses a familiar twin-turbocharged 4.0-liter V-8 that produces 630 horsepower and 664 pound-feet of torque, with a permanent-magnet synchronous AC motor and a 4.8-kWh battery pack incorporated in the rear axle. Through a two-speed gearbox, the motor adds an additional 201 horsepower for up to 10 seconds, or 94 horses continuously. The lithium-ion battery pack is charged via the 3.7-kW onboard AC charger.

Together, they make 831 horsepower and 1082 pound-feet of torque. A nine-speed automatic transmission handles the gear exchanges, and AMG’s 4Matic+ all-wheel-drive system delivers torque to all four corners. Additionally, the electrified rear axle has an electronically controlled limited-slip differential. AMG claims the GT63 S E Performance will reach 62 mph in 2.9 seconds with 124 mph arriving in less than 10 seconds. We expect it to be much quicker as a GT63 S reached 60 mph in 2.6 seconds in our test.

Like the nonhybrid model, the GT63 S E Performance is equipped with AMG’s air springs with electronically controlled adaptive dampers. Seven drive modes are available, including an electric mode that’s good for a claimed 7 miles of driving range and speeds up to 80 mph, and four levels of regenerative braking are toggled via a button on the steering wheel. Its carbon-ceramic brakes measure 16.5 inches up front and 15.0 inches in the rear, 0.7 inch larger in the front and 0.8 inch in the rear than the nonhybrid. 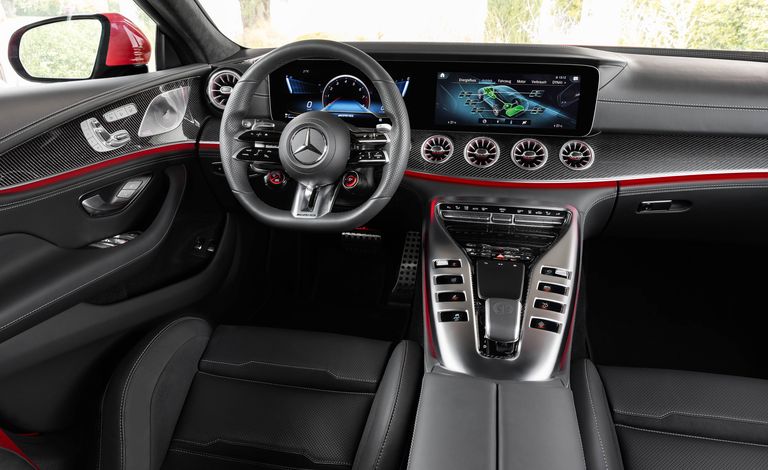 You can tell them apart by a red GT63 S badge on the rear just above the charge port and a “V8 BiTurbo E Performance” badge on each front fender. Seven new exterior color choices are available, too, along with four matte and five metallic colors and new 20- and 21-inch wheels. The MBUX infotainment system can display hybrid-specific information such as electric driving range, the power of the electric motor, battery temperatures, and power flow, which can also be displayed on the optional rear passenger screens.

Mercedes-AMG will announce U.S. specs, including pricing, closer to the GT63 S E Performance’s launch for the 2023 model year.