Kia has borrowed the electrified setup from the closely related Hyundai Tucson Hybrid for the latest generation of its compact crossover.

The Kia Sportage debuted with a distinct new design earlier this year, and now it gains an efficient Hybrid model.

The Sportage Hybrid has the same powertrain as the Tucson Hybrid, with a turbo 1.6-liter four teamed with a 44-kW electric motor.

Kia says it’s aiming for a 39-mpg rating from the EPA, and the Sportage Hybrid will come with either front- or all-wheel-drive.

This summer, the fourth generation of Kia’s Sportage compact crossover debuted with a polarizing new front end design and larger dimensions than the outgoing model. Closely related to the striking Hyundai Tucson, the Sportage arrived with the same naturally aspirated 2.5-liter inline-four found in the Tucson. Now the Sportage is borrowing another powertrain from its crossover sibling, with Kia revealing the 2023 Sportage Hybrid at the Los Angeles auto show. 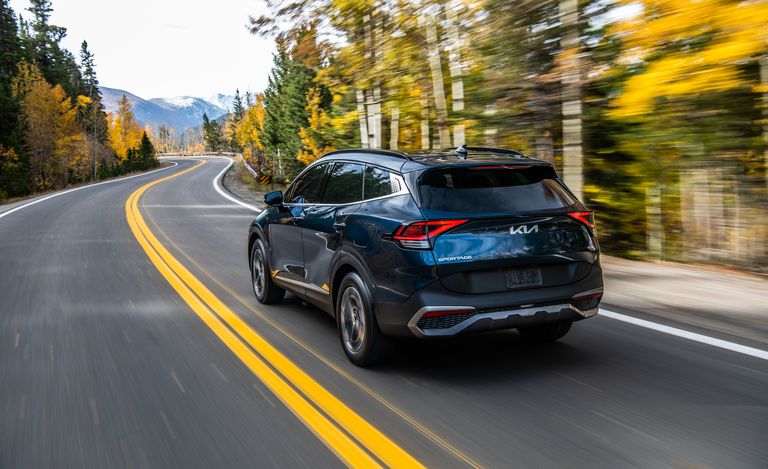 The Sportage Hybrid uses a turbocharged 1.6-liter four-cylinder paired with a 44 kW permanent magnet electric motor, which draws juice from a 1.49 kWh lithium-ion battery. The combined 226 horsepower is routed through a six-speed automatic, just like in the Tucson. Kia didn’t quote a torque figure, but we assume it will make the same 258 pound-feet as in its Hyundai counterpart. The Tucson Hybrid can get up to an EPA-estimated 38 mpg combined; Kia says it is targeting 39 mpg for the Sportage Hybrid. Kia also claims a class-leading 2000 pound towing capacity. Visually, the Hybrid is distinguished by new 17- and 18-inch wheels and badges reading “HEV,” for “Hybrid Electric Vehicle.”

The hybrid powertrain will be available in three trim levels: the LX, EX, and SX-Prestige. The LX can be had with either front-wheel drive or all-wheel drive, while the EX and SX-Prestige get the Active AWD system as standard, which employs electro-hydraulic coupling with a center-locking differential to divide power between the front and rear wheels. The Sportage Hybrid will go up against the Tucson Hybrid, as well as the Honda CR-V Hybrid—rated at 38 mpg by the EPA—and the Toyota RAV4 Hybrid, which earned an EPA-estimated 40 mpg. Kia didn’t say when the hybrid Sportage will go on sale or how much it will cost, but we expect it to arrive around the same time as the gasoline model early next year and mirror the Tucson’s pricing, starting at around $30,000.