Ford Bronco enthusiast website, Bronco Nation, is lucky enough to have gotten an official sneak peak at the upcoming Bronco Raptor, which will arrive next year and join the F-150 Raptor in Ford’s new high-performance off-road lineup. We’ve seen spy photos of the Bronco Raptor before, but these lightly camouflaged images show its assertive stance, burly rubber, and aggressive looks. 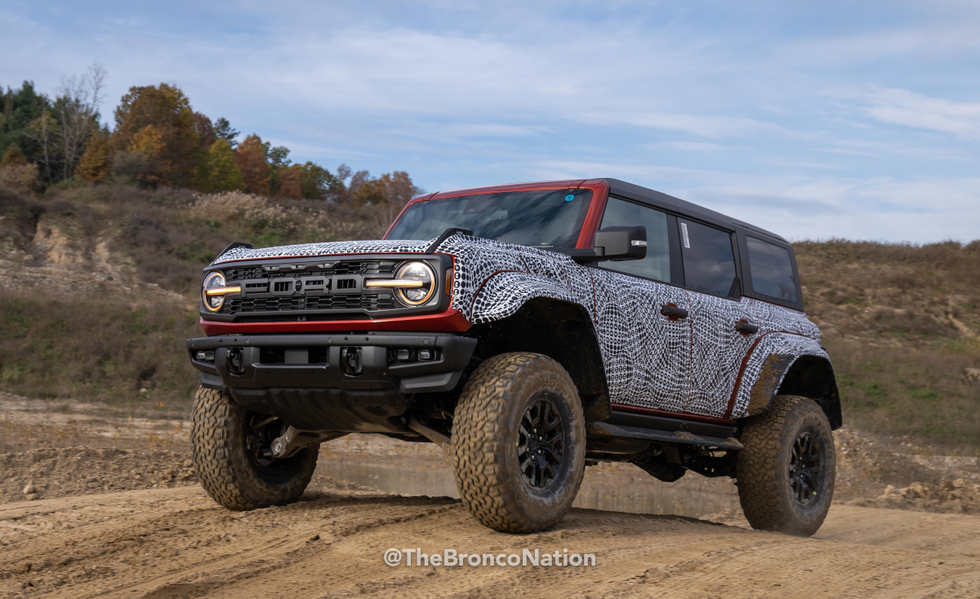 The Ford Bronco Raptor will be equipped with Fox’s Live Wire twin-tube bypass dampers (also used on the F-150 Raptor), making it ride much higher than the standard SUV. It’ll be available with 37-inch BFGoodrich K02 all-terrain tires (also a newly available option on the F-150 Raptor), though a set of smaller 35-inch tires should be standard. Tying all these aggressive elements together will be a significantly wider stance, as clearly seen here, with bulging fender flares. It also has a “Ford” script grille like the F-150 Raptor, amber headlights and marker lights, meaning it’ll be more than 80 inches wide, skid plates, and darker, unique taillights.

Ford has yet to reveal any details on what will power the Bronco Raptor, but rumor has it that it’ll use a significantly more powerful EcoBoost V-6. Currently, the Bronco’s most powerful engine is a 330-hp twin-turbo 2.7-liter V-6 that helped propel the two-door Bronco First Edition to 60 mph in 6.3 seconds in our testing. The Bronco Raptor’s output should be much higher and could even approach upwards of 400 horsepower. But it’ll have to compete with the new Jeep Wrangler Rubicon 392’s 470-hp V-8.

Look for more information, including powertrain specs, on the 2023 Ford Bronco Raptor as the automaker releases more information closer to its arrival next year. For now, we’ll drool over these images thanks to Bronco Nation.