Although it drops the previous base trim, the GLI still can be had with a six-speed manual.

Despite Volkswagen’s push toward electric vehicles, the company is providing assurances that it’s still dedicated to the sport compact car. Want evidence? The new-generation Golf GTI and Golf R have clearly been developed with driving enthusiasts in mind. VW’s American arm pushed for six-speed manuals in both of those cars and convinced its corporate overlords in Germany that such a move would be rational and wise. Consider that a love letter to the American driver, because our counterparts in Europe won’t find that option available when they place their orders.

The performance variant of the humble Jetta sedan—the Jetta GLI—also will not show up in a European showroom; it’s sold only in North America and Brazil. The GLI’s 228-hp turbocharged 2.0-liter four-banger makes a whopping 70 more horsepower than the standard Jetta’s engine and comes with performance enhancements such as adaptive dampers and limited-slip differential. 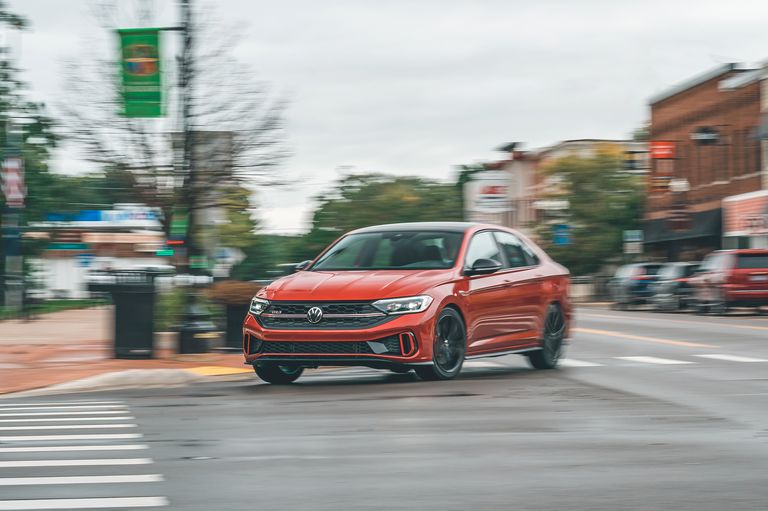 The GLI remains a lovely driving partner. During our test drive through the hill country near Asheville, North Carolina, the GLI’s eager steering and crisp-shifting six-speed manual made running through the area’s narrow mountain passes a joyful exercise. Although it isn’t as tied-down as the new Golf GTI, the GLI does its best impression of that performance icon. On the highway during normal cruising and commuting, the GLI settles into Jetta mode, meaning it’s refined, comfortable, and easygoing.

The updated exhaust system sounds a bit ruder for 2022, particularly when driving in Sport mode, which allows more of the GLI’s newly baritone voice to enter the cabin. This soundtrack may delight boy-racer types, but we found ourselves needing to activate the Normal driving mode to quiet the cabin when cruising. Ultimately, we’re not convinced this does much to enhance the GLI’s appeal. 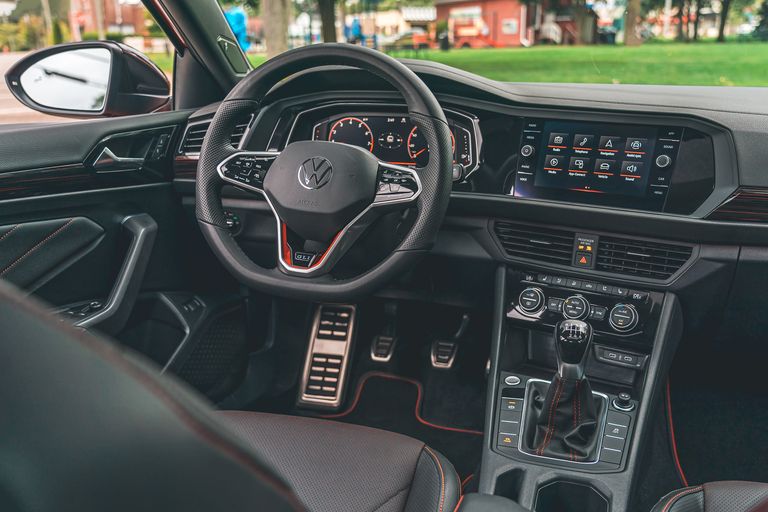 Same goes for the new touch-sensitive steering-wheel controls. Their glossy black finish gives an added pop of premium appearance, but on several occasions when driving the snaking roads west of Asheville, we managed to inadvertently change the radio station midcorner by accidentally bumping the tuning button. Moreover, the volume control slider is fussy and imprecise.

Back in 2019, we tested GLIs with both the six-speed manual and the optional dual-clutch automatic. Those cars managed to hit 60 mph in 5.8 and 5.6 seconds, respectively. The automatic was also slightly quicker than the manual through the quarter-mile, with a time of 14.1 seconds at 101 mph versus 14.3 seconds at 102 mph. Since Volkswagen has made no updates to the car’s powertrain or chassis, we expect similar times from the 2022 model. 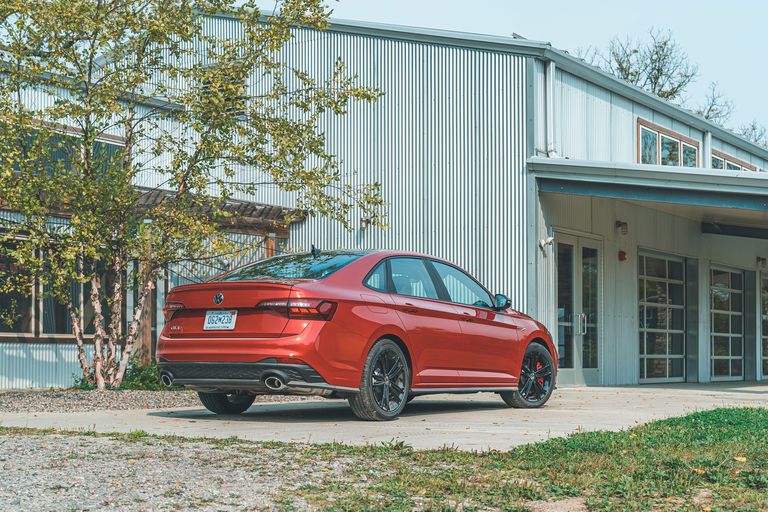 The nicely tailored interior gives off strong Audi vibes, which is good because for 2022 Volkswagen has eliminated the entry-level GLI trim, leaving only the loaded $31,990 Autobahn model. Opt for the dual-clutch automatic, and the price climbs to $32,790. The GLI’s nearest rival, the Honda Civic Si, is all new for 2022 and will start at just $28,315.

But VW may find that the GLI’s biggest competition is inside its own showroom: The 2022 Golf GTI starts at $30,540—granted that’s for a base model with less equipment. But the Golf’s hatchback body style, its performance legacy, and its more modern styling may draw buyers away from its Jetta sibling. The 2022 model’s updates help keep it fresh, though, and the GLI’s fun-loving attitude is something every driver can appreciate. 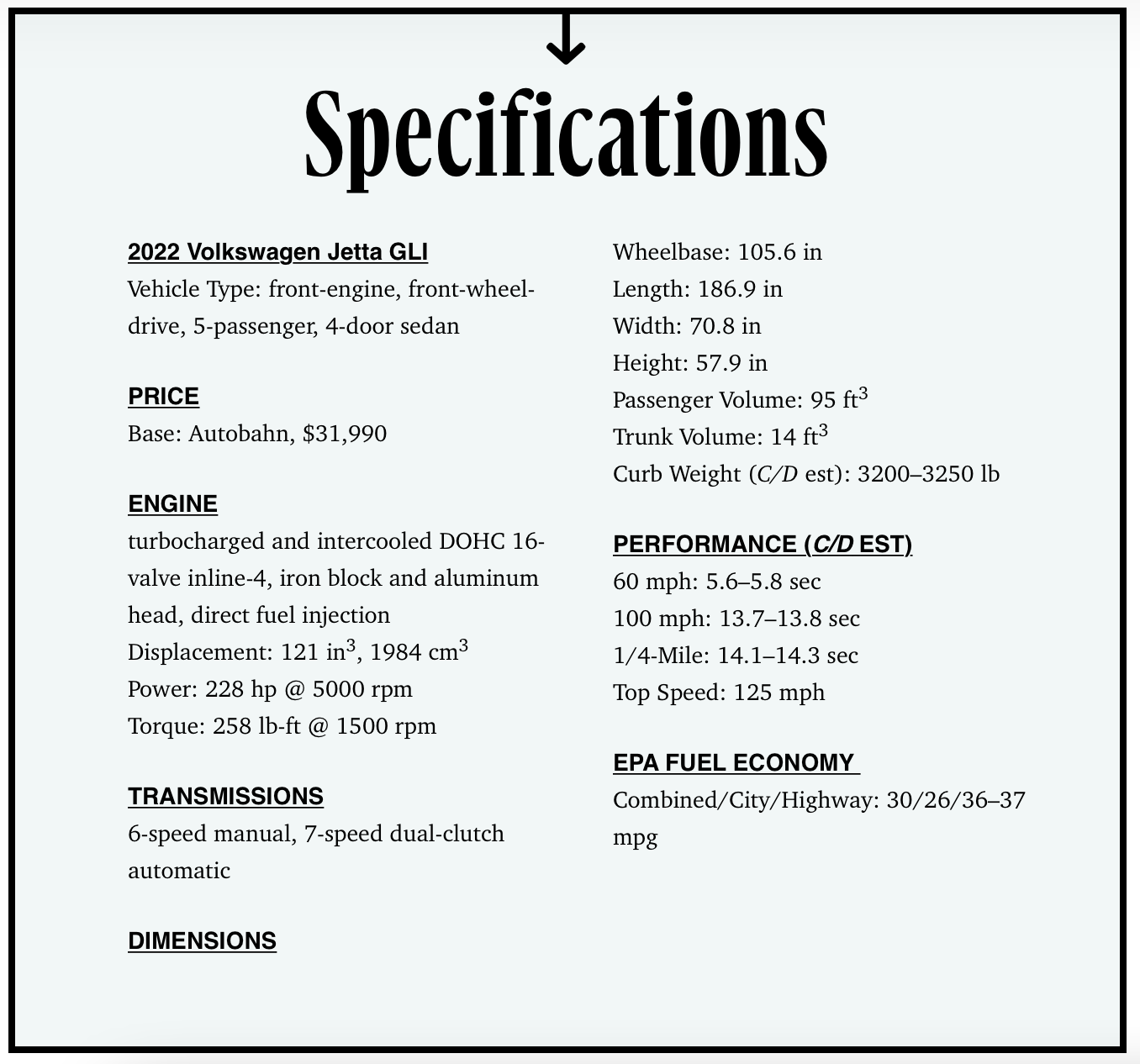