From the September 2021 issue of Car and Driver.

The hot-hatch genre has, at times, made us feel very old. Our younger selves would have happily tolerated a bouncy ride, a laggy engine, or a raucous cabin if it kept the price low and the fun-to-drive quotient high, but our backs, our patience, and our eardrums aren’t as forgiving as they once were. Volkswagenseems to understand.

Ahead of the VW Golf R’s arrival here this fall, we recently drove a Europe-spec model around our Michigan stomping ground and concluded that it stays true to the franchise. The new Drift mode may be the star in the highlight reels, but the Golf R’s distinguishing trait is that it’s so much more well rounded than your typical hot hatch. 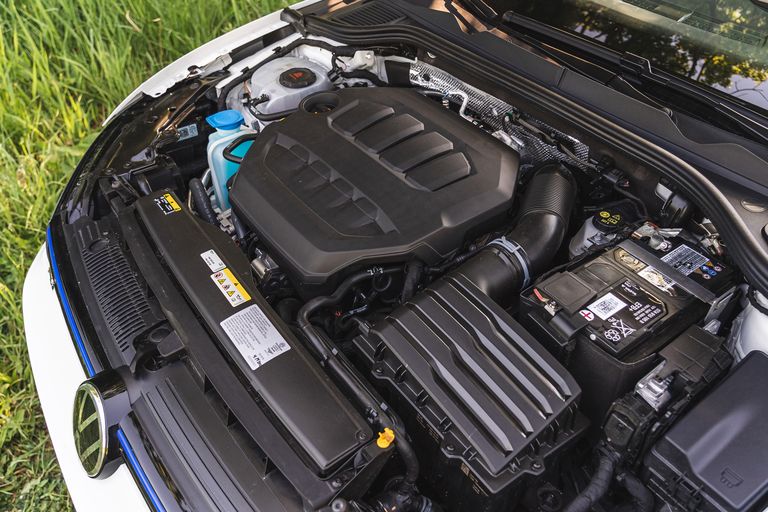 The heart of the Golf R remains a turbocharged iron-block 2.0-liter inline-four, but Volkswagen massaged the software and moving bits to a Civic Type R–beating 315 horsepower and 310 pound-feet of torque, gains of 27 and 30, respectively. Most turbo fours this powerful feel as though they were tuned by Michael Bay, with their barely controlled, explosive power delivery. Not this one. The fourth-gen EA888 is linear and refined in its work, even at its most violent. Engage launch control and the optional seven-speed dual-clutch automatic slips a clutch through first gear rather than slamming shut in the axle-shaft stress test we’ve grown accustomed to from other all-wheel-drive products. The transmission flicks through the gears at a furious pace. We expect the automatic-equipped R to sprint to 60 mph in 4.3 seconds, with the manual-gearbox car trailing a few tenths behind. 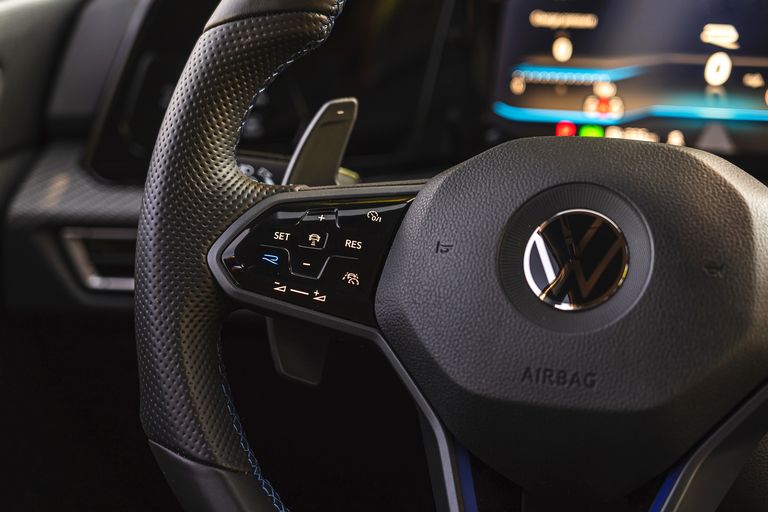 An R button on the steering wheel pulls up a driving-mode-selection screen on the central display—this is the easiest-to-use function of the otherwise infuriating new infotainment system. Our test car came with the R-Performance package, which U.S. cars won’t see. It’s a shame, as the pack’s Special mode readies the R to tackle the Nürburgring by sharpening the throttle, livening up the transmission, and dialing in the 15-position electronically controlled dampers. This mode is also perfect for terrorizing your local twisties, where the driving experience can best be described as that of a Porsche 718 Cayman with a back seat. Yes, this Golf—with a transversely mounted four-cylinder in an economy car’s body—is that good. The steering is quick if a touch short on feel, and the firm brake pedal works the 14.1-inch cross-drilled front rotors with precision. 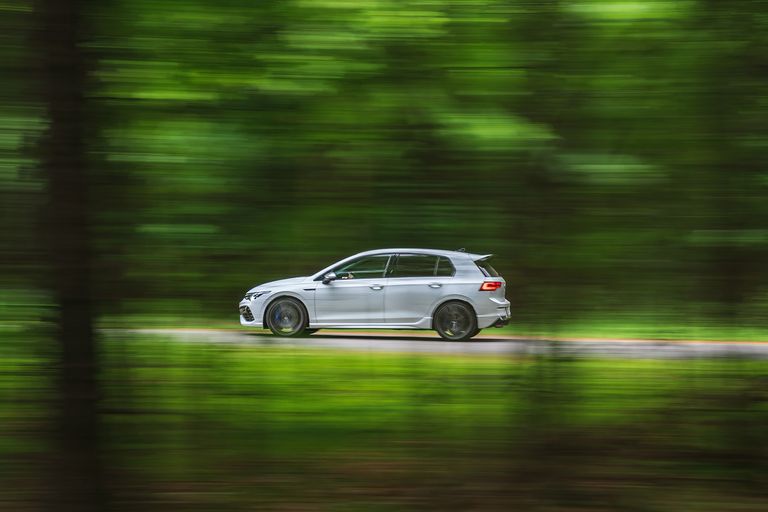 The revised all-wheel-drive system abandons the previous model’s center coupling for a pair of electronically controlled clutch packs, each dedicated to one of the rear-axle half-shafts. By varying pressure in the clutches, the Golf R can shuffle the left-right torque distribution to aid rotation. With Drift mode activated, the system delivers all the torque to the outside tire in turns, but don’t expect cinematic power­slides: The car is capable of routing only 50 percent of the engine’s grunt to the rear axle.

That’s fine by us, because the Golf R’s thrills are more sophisticated than sliding sideways and sending up smoke signals. If you’re more interested in speed, precision, and refinement, this is your hot hatch. Hopefully you’ve been saving like a grown-up, because the Golf R will carry a very adult price, starting at $44,640. 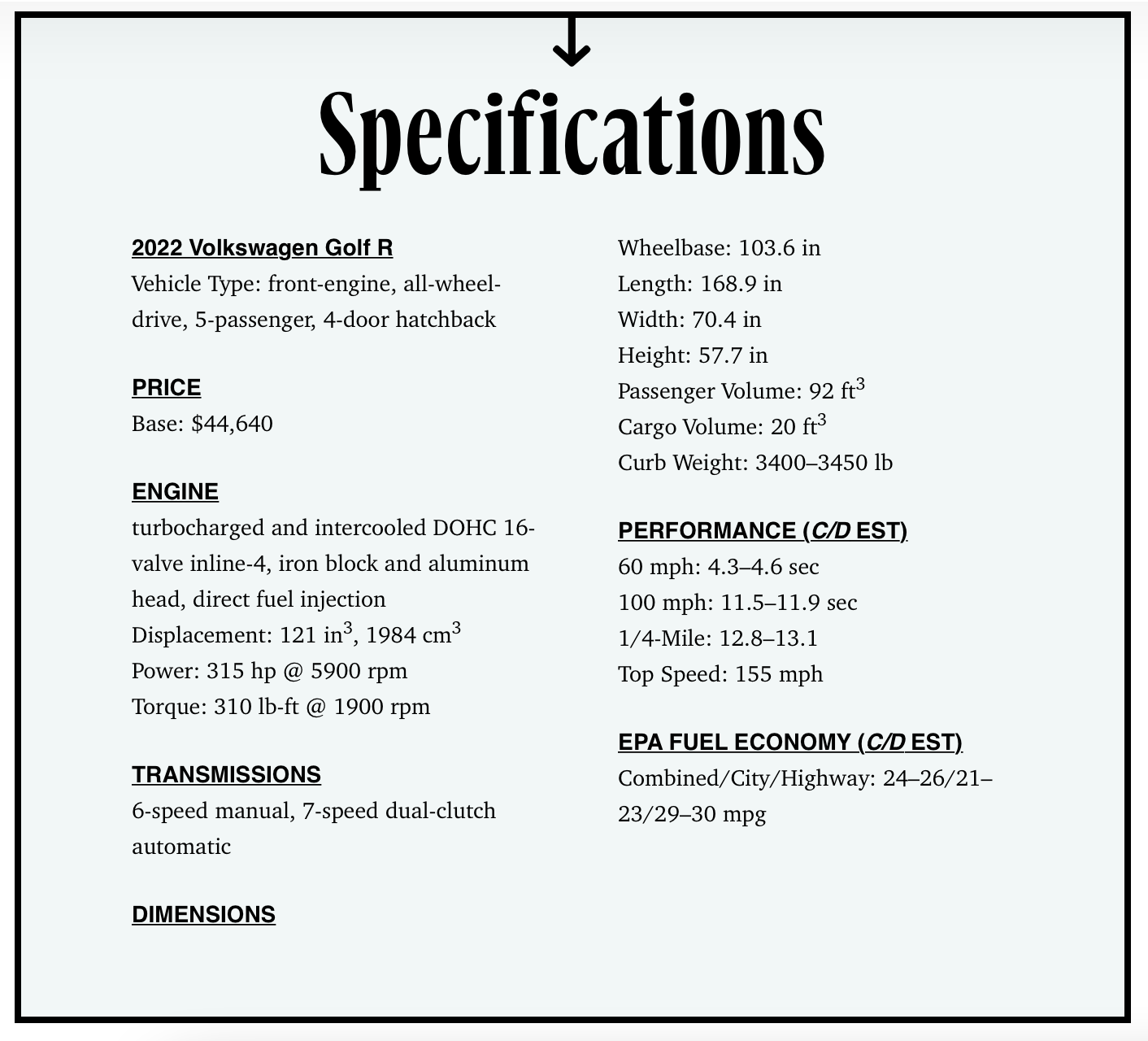