While it’s not entirely new, the GR 86’s larger engine and revised chassis are more than enough to keep us happy.

A car like the Toyota GR 86 isn’t supposed to happen in this age of SUVs and electrification. Small and affordable coupes like the rear-drive GR 86 are pretty much dead. And yet Toyota has just refreshed its almost one-of-a-kind sports car, and it isn’t just good, it’s great.

We adore high-powered coupes such as the 760-hp Ford Mustang Shelby GT500, but more than often their massive outputs make exploiting their capabilities on the street a lawyer-on-retainer task. In a car such as the 228-hp GR 86, there isn’t a big engine to make up for your cornering mistakes. What you do get is a sensation of speed that runs through the car’s chassis and controls.

Since the structure of the GR 86 is largely the same as the 86 that preceded it, we’d call it a major refresh and not a redesign. It does look new as Toyota changed enough of the exterior design to distinguish the new car from the old. It’s a well-proportioned and downright handsome car with a sleeker greenhouse. Toyota also strengthened the structure with front and rear reinforcements. Previously, the 86 featured an aluminum hood. The new car adds an aluminum roof and fenders to help offset the weight of the new structural components.

A very important change is under that aluminum hood. The old 2.0-liter flat-four that thrummed and moaned has been bored out to displace 2.4 liters. Horsepower rises from 205 for the manual version to 228 across the board. (Previously, the automatic made 200 horsepower.) Aside from the sound of the old engine, it had to be revved to 5400 to yield its 156 pound-feet of torque. The larger engine makes 184 pound-feet of torque at a much more usable 3700 rpm. The intake and exhaust plumbing has been smoothed out to improve airflow, and a plastic intake manifold replaces the former aluminum plenum equipped on manuals and features larger ports that feed a revised valvetrain. 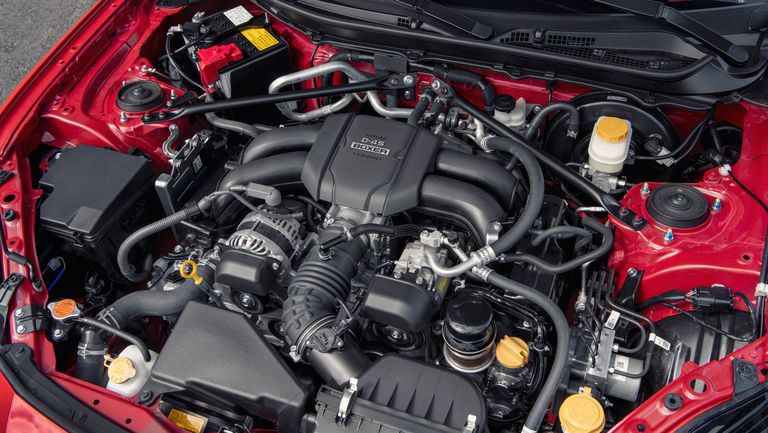 From behind the wheel, the changes are obvious. The added 23 horsepower may not sound like much, but an 11 percent gain is a meaningful improvement in a 2800-pound car. We expect the manual-equipped GR 86 to shave time off the last 86 GT’s 6.2-second run to 60. The extra power should be good for a 5.8-seconds run to 60 mph, and the engine is livelier, more responsive, and happier as it spins to the 7500-rpm redline. It sounds better too. There’s a speaker to amplify the engine sound, and that sound intensity varies depending on the selected drive mode, but it’s good enough to believe it’s the real thing.

Automatic buyers, which Toyota predicts will be the majority, will find six speeds and paddles on the steering wheel. Revisions include additional clutch plates and a new torque converter to cope with the newfound, well, torque. With the automatic-specific Sport mode engaged, the shift strategy smartens by holding on to gears and wisely downshifting during hard braking. Automatic buyers will also be able to add safety features such as adaptive cruise, collision warning, and lane-departure systems provided by Subaru’s EyeSight dual cameras peering through the windshield. 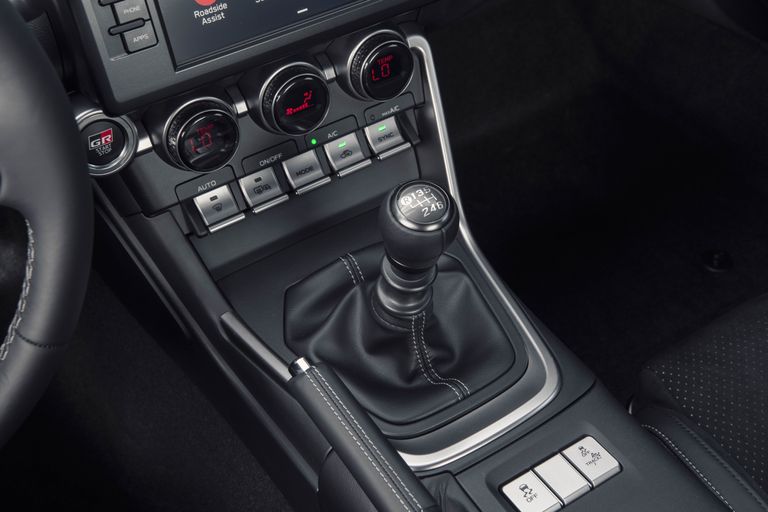 We naturally gravitate to the six-speed manual gearbox, which has also been treated to refinements and strengthening. The shift lever travels through the gates with a smooth and positive movement. The clutch pedal is on the lighter side, but the engagement is spot on. The GR 86 lacks active rev matching, so you’re on your own for throttle blips when downshifting. The pedal positioning makes heel-toeing somewhat tricky, but with some tweaks to your foot placement, it’s possible. Both the automatic and manual retain the Torsen limited-slip differential, now with taller gearing.

The GR 86 will be offered in two trims: Base and Premium. Both of which will supply front and rear LED lights, a digital instrument cluster that changes depending on drive mode, an 8.0-inch touchscreen infotainment system that no longer looks like it’s from the dial-up internet era, and a tastefully executed, no-thrills interior that puts function first. The Base model rolls on slide-happy Michelin Primacy H/P tires size 215/45R-17. Moving up to the Premium nets a duckbill spoiler on the decklid, aluminum pedals, heated leather seats with suede inserts, and most important, 18-inch wheels and sticker Michelin Pilot Sport 4 shoes size 215/40R-18.

Piloting the GR 86 around the winding roads of the Catskill Mountains reveals the revised damper tuning is well adept for daily use: not too soft nor too firm. But the true revelation is navigating the straights and curbing of Monticello Motor Club. Toyota tells us they’ve tuned the GR 86 differently in comparison to the BRZ by using a stronger front knuckle, stiffer front anti-roll bar, and different springs. We’ll need to get the two next to each other to sniff out any differences, but when punching it around Monticello, the GR 86 is a delight.

A new column-mounted steering motor controls the marginally quicker steering rack. Turn-in is crisp and quick, body roll is contained, and the thin-rimmed leather-wrapped steering wheel sends positive communication as the front tires begin to give up grip. But the most talkative feedback comes through the seat pan as the chassis proudly alerts you’ve reached the limit. The rear tires step out as the GR 86 threatens to move forward sideways only to be reeled back in by subtle steering-wheel motions. It’s the neutral cornering balance, which can be easily upset into oversteer by aggressive throttle applications, that makes these cars so much fun to drive at the limit. 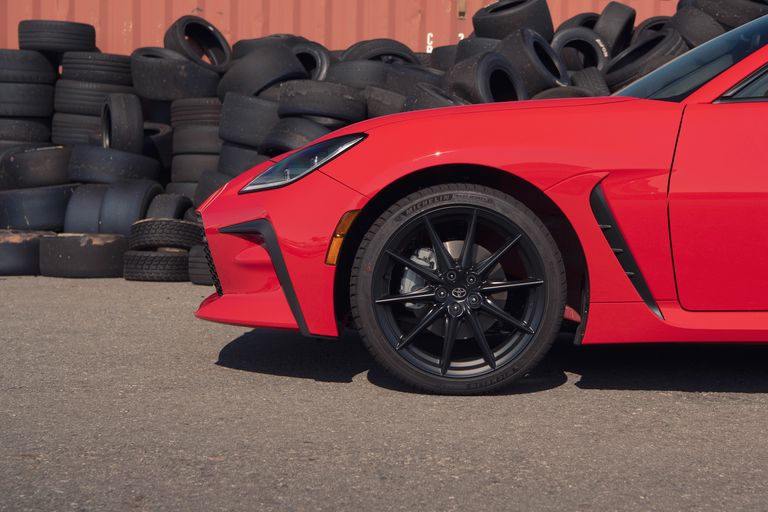 All versions of the GR 86 come with the identical brake package as the previous car. Sliding two-piston calipers clamp 11.6-inch rotors in the front, and 11.4-inch rotors are pinched by sliding single-piston units in the rear. While street driving or autocrossing may never expose much fade, Monticello’s full course did. Previously, Toyota offered a Brembo brake package with larger rotors and fixed calipers front and rear, and we’d like to have that option return. Slowing down from Monticello’s fast straights is enough to overtax the GR 86’s brakes. Toyota promises a track pad will be sold as an accessory. Other bolt-on options include a cold-air intake, short-throw shifter, and cat-back exhaust system.

When the GR 86 arrives at dealers, it’ll start at less than $30,000 and come with a one-year membership to the National Auto Sport Association and one performance driving class. Two years of no-cost maintenance is part of the deal too. The GR 86 is proof that the budget coupe isn’t extinct, at least not for a few more years. 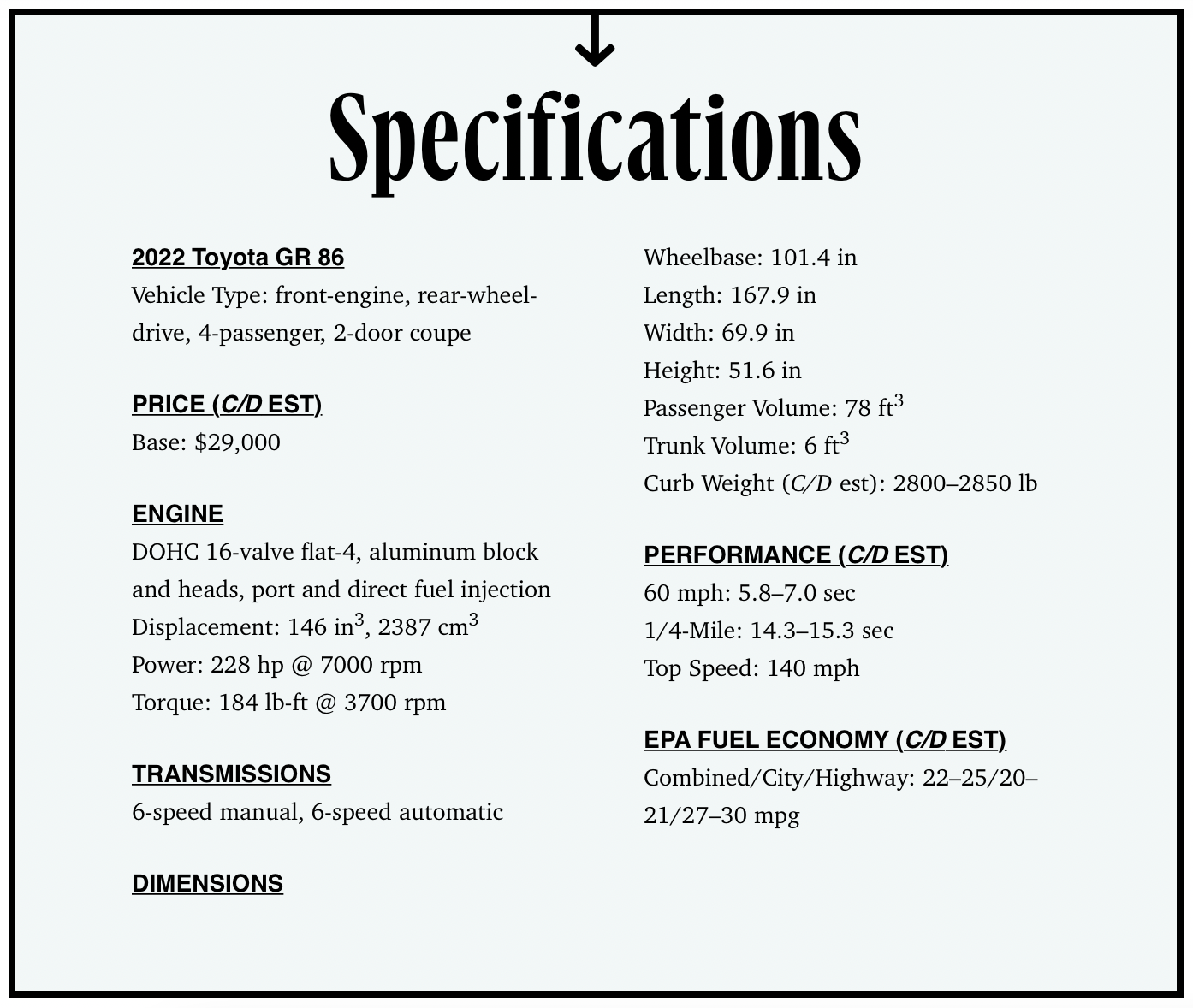