The new WRX adds a few inches but not many pounds, and it grows up a little bit, but not too much.

In the tug of war between an all-SUV world and actual car-shaped cars, Subarustill has a few models holding the rope on the car side. There’s the BRZ, which we loved enough to award it a 10Best award, and there’s a redesigned WRX for 2022, too.

In case your car love has slept through the past 20 years, the WRX is largely responsible for introducing a generation of boys and girls to the joys of turbo lag, all-wheel drive, and a manual transmission. As before, automatic buyers get a CVT that can pretend to be an eight-speed auto, but Subaru claims that the auto is more responsive and quicker to respond. We’ll have to wait to test those assertions, as supply-chain issues have sidelined the automatic. As you can imagine, we cried many tears of disappointment and then popped the clutch in a World Rally Blue Pearl Limited model and drove it 700 miles on some of California’s best driving roads. We didn’t set out to drive it so many miles; we just kept finding more good roads. It’s that kind of car. 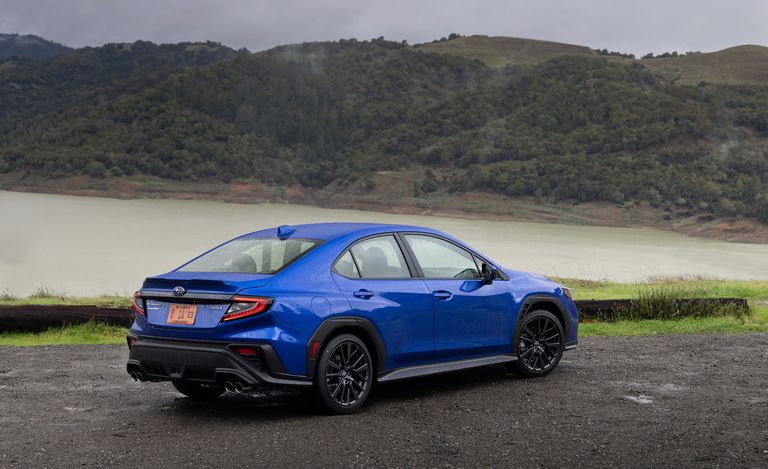 The WRX started as a rally version of the Subaru Impreza, and the new one is built on the same Subaru Global Platform as the Impreza, but the 2022 WRX is the first one with a completely distinct design that doesn’t share a single exterior panel with the Impreza. The new WRX is all sharp body creases partly covered by textured plastic cladding. Its intercooler-feeding hood scoop, fiery geode taillights, and fender-flared stance set it apart from less sporty four-doors, and while it’s not exactly a pretty design, it has a rugged charm. Slightly wider and nearly three inches longer than the outgoing model, the WRX remains sporty and relatively small and, most important, a car.

Driving it reveals a straightforward sports sedan with rally-car energy and a quick-revving turbocharged engine. Where we’ve criticized it in the past for having a bare-bones interior, flinty ride quality, and annoying levels of cabin noise, the Subaru engineers have made noticeable changes by focusing on those areas. The WRX’s new architecture boasts a lower center of gravity and greater stiffness, to which Subaru bolts a slightly softer suspension to improve the ride. In the interest of noise, vibration, and harshness, the engine, suspension, and steering mounting points were changed, too. 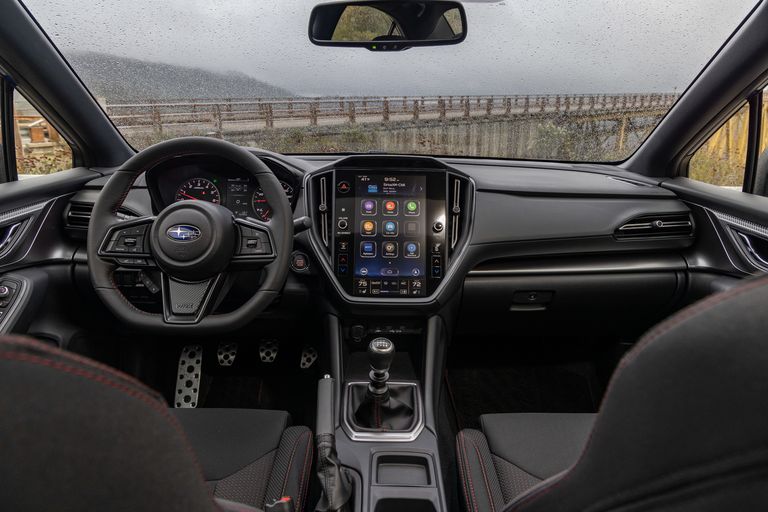 The resulting car sounds quieter and the ride less abusive. Except on a particularly egregious stretch of washboard highway, the 2022 WRX never seemed unsettled by uneven concrete, and life in the cockpit remained peaceful, or as peaceful as it can be when you’re doing your best Colin McRae imitation through a redwood grove and daydreaming about who would win in a collision, the WRX or Bigfoot? You might be able to stop in time: the WRX’s brakes—12.4-inch discs in front and 11.4 in the rear—are not flashy but work brilliantly with the 245/40R-18 Dunlop SP Sport Maxx GT summer tires. Base versions have slightly smaller feet and wear 235/45R-18 summer tires.

Should you meet a careless cryptid, it would likely be worse for him than you. In addition to the WRX getting a stiffer platform, Subaru has improved its crash structure. As before, the WRX comes standard with seven airbags, so come at us, Yeti. Perhaps based on the assumption that automatic owners are less attentive, the CVT versions get Subaru EyeSight driver assist and adaptive cruise control with emergency steering, but manual-trans cars do not. 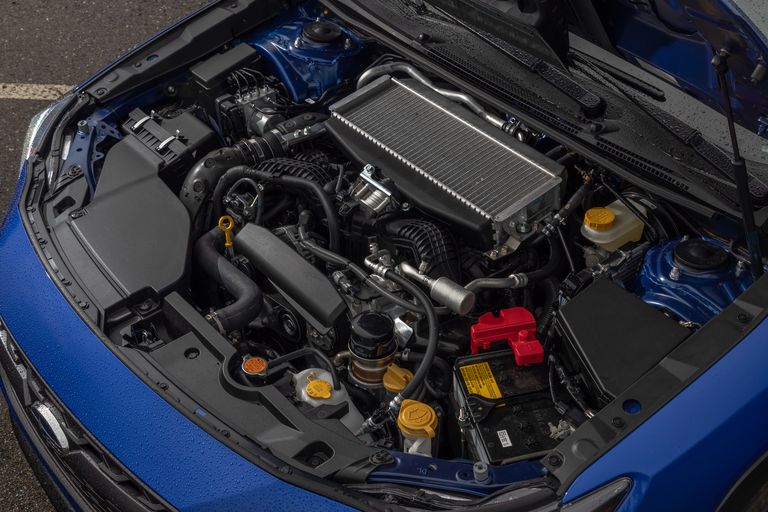 There are four WRX trim levels: Base, Premium, Limited, and GT. The latter only comes with the CVT and offers electronically controlled dampers, but the auto is available on all models. All trim levels use the same engine, a 2.4-liter turbocharged four-cylinder making 271 horsepower and 258 pound-feet of torque. Numerically, that isn’t much different from the previous 2.0-liter, but Subaru says the new engine has a broader torque curve and a redesigned wastegate to minimize turbo lag and improve low-rpm response. We expect the same or marginally quicker acceleration, as Subaru claims the new car is only about 20 pounds heavier than the last WRX. It’s quick from a start but most enjoyable above 3000 rpm, when the boost is boosting and the revs are revving to the 6100-rpm redline. Slow down or select too high a gear, and it’ll lug and sigh until the turbo wakes up. Even when worked hard, the 2.4-liter never seems too strained, but there’s a fuel cost for the fun. The manual’s EPA-estimated fuel economy drops by 1 mpg in both metrics, to 19 city and 26 highway, and the automatic falls to 25 highway from 26. One more reason to go with the six-speed.

Manual shifters are rare enough that we’re predisposed to like any interior that houses one, but for those of you who require more than three pedals to be won over, the WRX now comes with an 11.6-inch touchscreen center display; carbon-fiber-patterned accents; a flat-bottomed, leather-wrapped steering wheel; and, in the Limited trim , red-accented faux-suede seating surfaces. 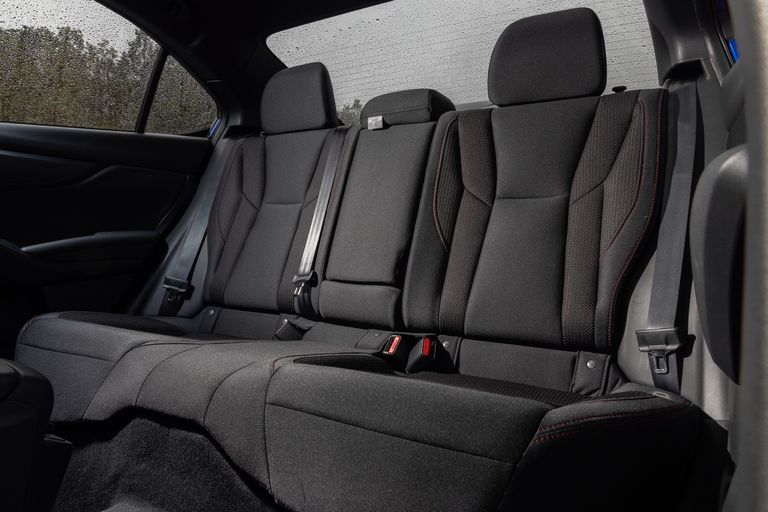 Subaru’s interface is hit or miss. There are some physical buttons for HVAC controls and screen brightness, but others—like the heated seats and the in-car navigation—require a series of screen taps. Trunk size is up one cube to 13 cubic feet, and there’s also more room in the back seat. A 0.9-inch wheelbase stretch contributes to a 1.1-inch expansion of rear-seat legroom. Two adults will be comfortable in back, and while the lowered roofline cuts into headroom, a road trip with four full-size people would not be a problem. Full size, not Bigfoot size.

Despite the changes, the 2022 WRX retains the feel of its predecessor. An uptick in refinement makes it a little more sophisticated, but just a smidge. It’s quieter, maybe too much so for folks who enjoy the blaat, thrum, and pssssht of modified versions, but it still plants all four feet solidly on the ground and digs in with enthusiasm. It remains a joy to fling around corners or to toss into a parking spot at the Bigfoot Discovery Museum in Felton, California. While competitors like the Volkswagen GTI/GLI and Civic Si would battle the WRX on a tarmac stage, the WRX would dominate them on a gravel section.

Pricing has yet to be announced, but we’re expecting it to range from $30,000 to $40,000, which would represent an increase of about $1500. Subaru predicts you’ll see the new WRX at dealers in the spring: March for the manual and April for the automatic. On the other hand, you’ll probably have a much longer wait before you see a Sasquatch. 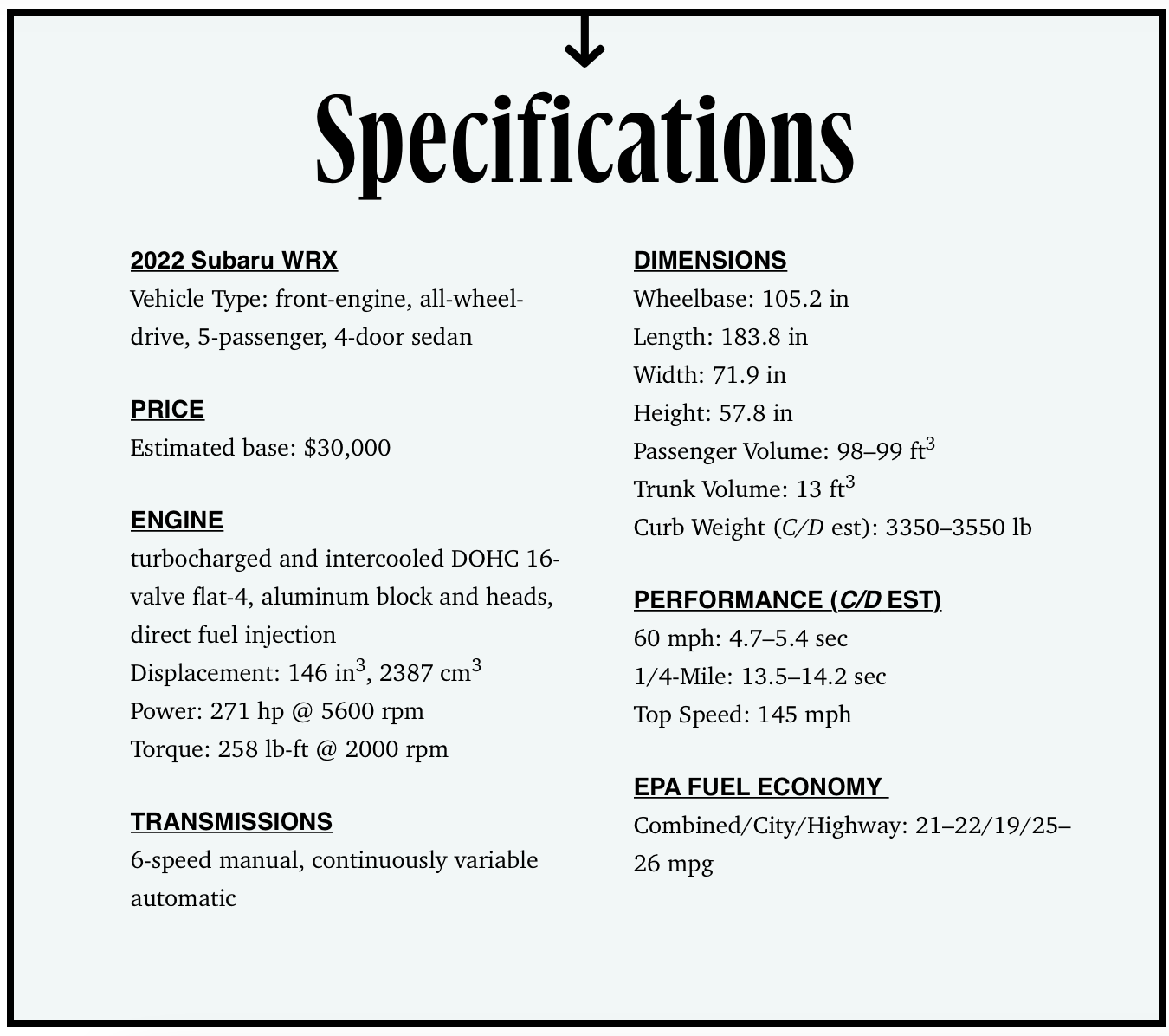