2022 Porsche Macan Does More with Less

Even in its base four-cylinder form, Porsche’s updated compact SUV is a joy to drive.

“Oh, that’s the Macan,” the woman said. “I like those.” Just as we were feeling smug about our ride, it became obvious she was talking about another Macan, parked a few spots over. Ah, well, it is the bestselling Porsche after all, and one can’t be too annoyed to see someone else in the same dress at a party. Besides, it’s a good dress, both fashionable and practical, as a sporty SUV should be. And the one she was admiring? So last season. The trend for the 2022 Porsche Macan involves new details in and out, and more power under the hood.

Porsche has tidied the Macan’s exterior with perked-up front and rear fascias, new mirrors, bright new color options, and a seemingly endless selection of wheels, with the standard for the base model now a 19-inch split-five-spoke design. Our test car wore 20-inch Macan S rollers with a dark finish, a $2320 option. That’s going to happen a lot in the coming paragraphs, as the base Macan that we drove was optioned so enthusiastically as to top out at $85,340, almost $30K over its reasonable starting price of $56,250. That’s enough to leapfrog the middle S trim, secure a top 434-hp GTS model, and have enough left over to spring for new-for-2022 $700 Papaya Metallic paint. But hey, love the one you’re with, right?

There is plenty to love about the starter Macan, and we’re not alone in thinking so. Most Macans you’ll see on the road will be this four-cylinder model. Porsche says the proportion of customers choosing the base model over the more powerful S and GTS (and previous Turbo) has been about 60 percent, and the automaker expects that trend to continue. While the performance models offer more power, plus a few cosmetic changes not available on the base version, you’ll get the same wide-hipped, athletic stance no matter which Macan you pick—and if our parking-lot admirer was any indication, all of them are head turners.

It impresses on the road too. Backed by a seven-speed dual-clutch automatic and standard all-wheel drive, the entry-level turbocharged 2.0-liter four-cylinder makes 261 horsepower and 295 lb-ft of torque, increases of 13 horses and 22 lb-ft over the 2021 model. Porsche made a lot of engine changes to free up those ponies. The new mill is fed air by a larger turbo and a redesigned intake designed to diminish turbo lag. It also has a higher-pressure fuel-injection setup, a new timing chain, and different pistons and rings. Reduced internal engine friction may not be your usual topic of conversation with the other parents in the school parking lot, but now it could be. Leave the bragging about acceleration times to the folks with the V-6 models, though. Even with its baker’s dozen of extra horses, the four-cylinder Macan should reach 60 mph in a relatively tame 5.5 seconds, and that’s with the optional performance boost of launch control from the $1220 Sport Chrono package. That was about the only option our test car didn’t have, so we avoided late-night street races in favor of sunrise in the hills above Malibu, California. It may not be a straight-line rocket, but the Macan is delightful when lines on the map get squiggly. 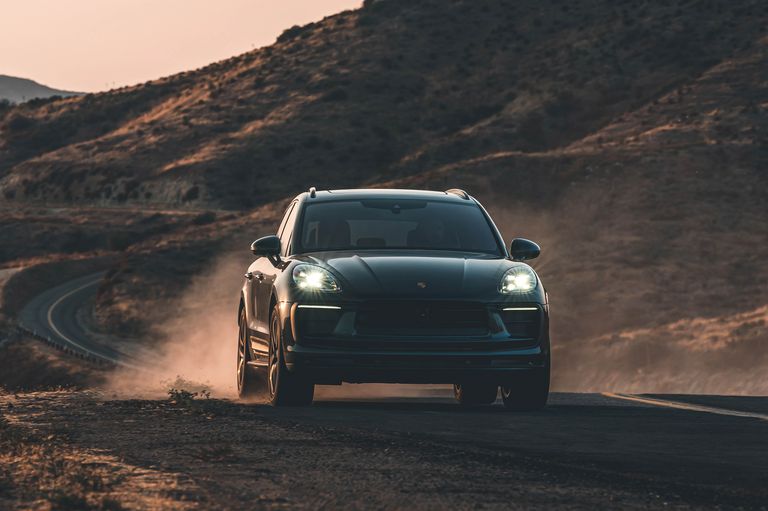 On the two-page options list for our example, one item we would spring for is the adaptive air springs, a $2750 add-on that includes Porsche’s PASM adaptive dampers. Various suspension and drive modes are expected in many vehicles these days, yet often they don’t seem to do much other than satisfy a desire to click buttons. But the Macan’s settings result in noticeable changes to its character on the road. The standard damper setting is soft enough to allow some wallowing around turns and absorb every bump like ciabatta soaking up olive oil. Click over to Sport Plus, and the Macan straightens up like a slouching schoolboy whacked with a nun’s ruler. Now it’s paying close attention, and all the sponginess is gone. Rough spots of pavement make their way through the steering wheel with soft thumps, enough to communicate a sense of the road but nothing that would turn your cream to butter on the way home from the grocery store. A lot of cars claim to deliver both comfort and handling. The Macan makes good on that promise, and it comes to a stop with the same smooth confidence with which it turns. The base model features conventional cast-iron rotors clamped by four-piston calipers in front and single-piston floaters at the rear, but the S model’s upgraded tungsten-carbide-coated brakes are an option for those who are fond of white calipers and minimal brake dust. 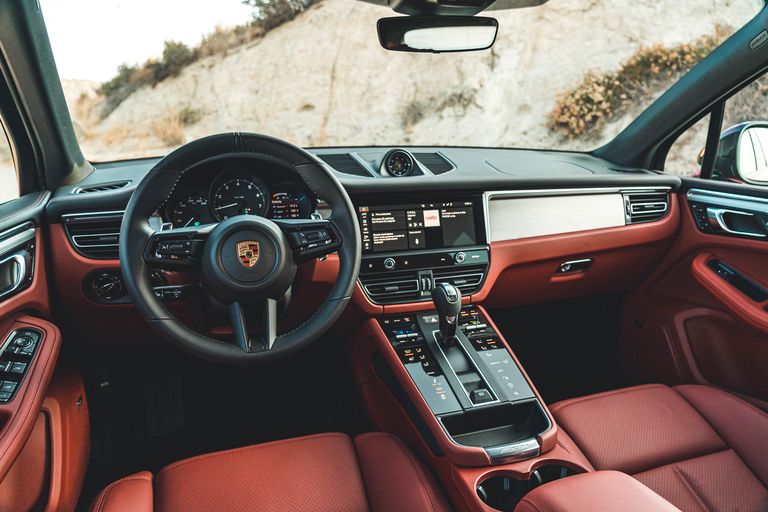 Inside the cabin, away from dust of any kind, the Macan employs Porsche’s minimalist interior decor with mixed results. What works in the smaller cockpit of a 911 feels sparse in the larger space of an SUV. Even with $3880 worth of extra red and black leather on the doors and dash, the interior feels underdone, with an odd jumble of touch-sensitive controls on the console and a slimmed-down but somewhat old-fashioned shifter jutting up by the cupholder. The gauges and infotainment screen were similarly split in design focus. The gauge cluster, with its sweeping physical needles, was refreshing, but the 10.9-inch center touchscreen was so small that Apple CarPlay may show up larger on your iPhone. And Android Auto? Still not supported. Storage compartments, usually the shining glory of an SUV, are as scaled down as the center display.

The Macan’s back seats provide ample legroom, but the gently sloping roofline limits headroom. This also necessitates a deeper reach to help small children in and out of the back, but the seats themselves—heated on our car, via the $2240 Premium package—are comfortable and feature a fold-down armrest, cupholders, and USB ports. While the tallest adults might not want to spend much time back there, most family-oriented buyers should be adequately pleased. As expected from a compact crossover, the Macan’s 17-cubic-foot cargo area isn’t move-a-couch large, but who wants to move a couch? Groceries, coolers, suitcases, pool floaties—the Macan can easily carry any combination of them, and it offers several handy tie-downs and an underfloor storage compartment. 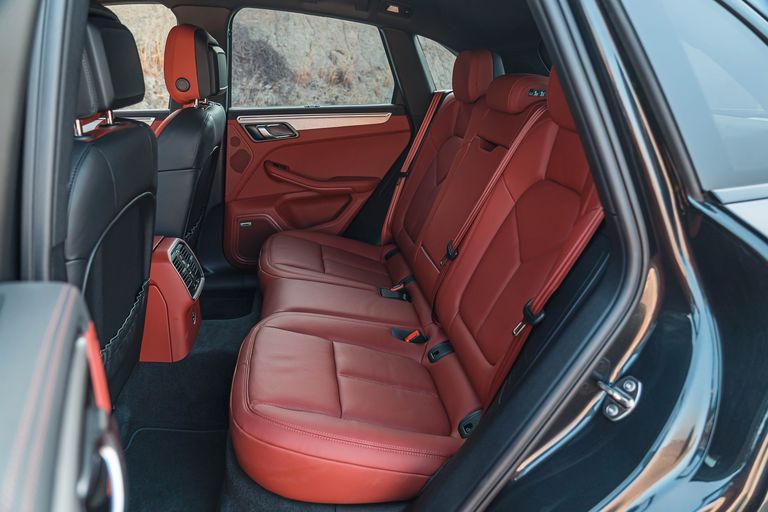 While many SUVs are seemingly designed more for comfort and utility than driver entertainment, the Porsche Macan is still all about the view out the windshield, whether that’s on an early-morning run up a winding road or a nimble dance through the moving chicanes of a strip-mall parking lot. Even in its most rudimentary form, Porsche’s compact crossover is an enthusiastic partner through all the unexpected twists of a day on the go. Let buyers of other more capacious SUVs lumber through town in their big seats, staring at their expansive infotainment screens, sucking down to-go drinks from cupholders large enough to house a koi pond. We’re going to weave through them until the scenery is open road. The base Macan proves that you don’t need to have the most horsepower to have a great drive. 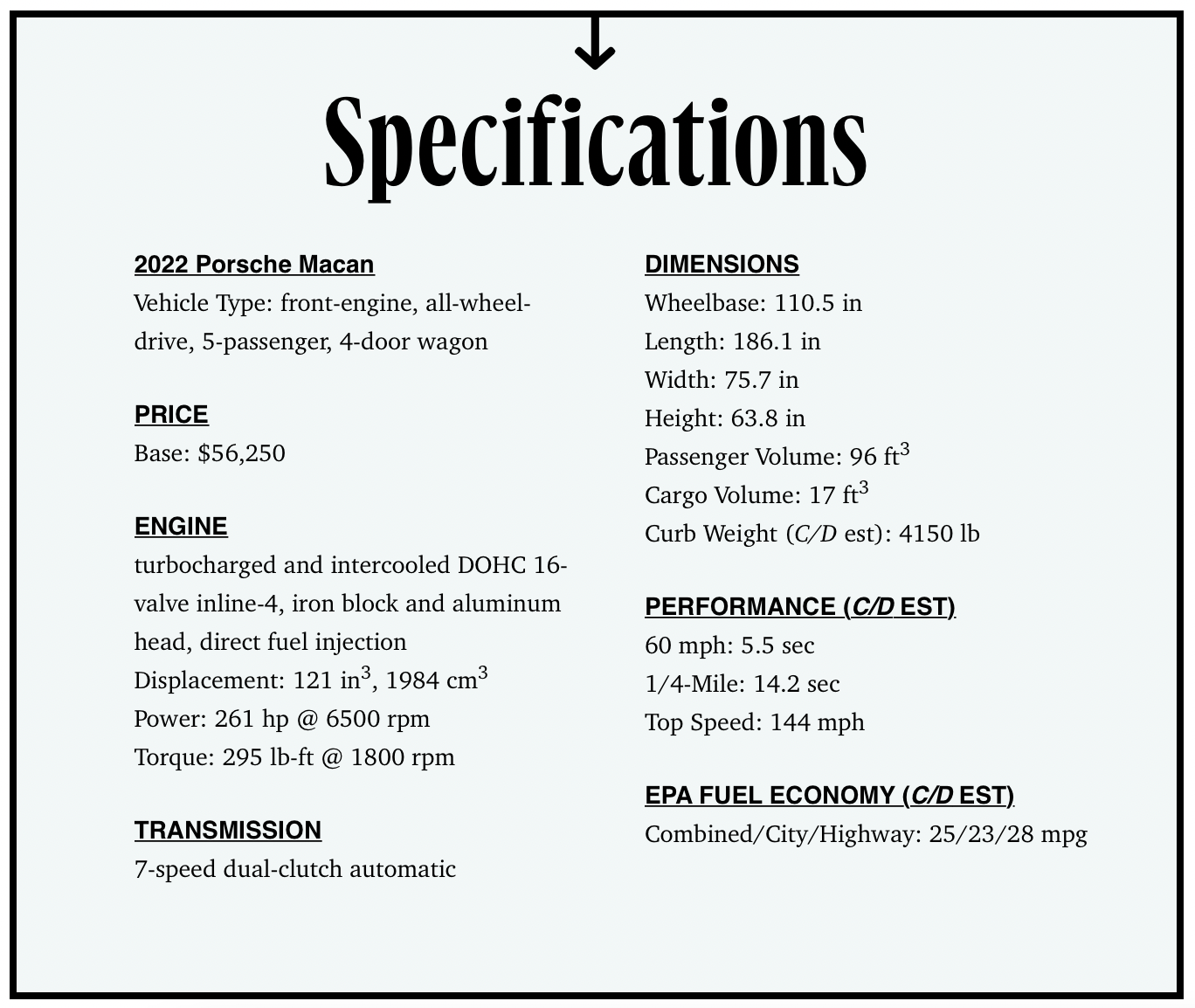