2022 Hyundai Ioniq 5 Charges to the Head of the Pack

We’ve officially reached the point where there’s a decent selection of compelling five-passenger electric SUVs with decent range. The Volkswagen ID.4, Ford Mustang Mach-E, and Tesla Model Y are becoming increasingly commonplace sights on American roads, and they’re about to be joined by the Kia EV6 and its sharp-looking crosstown rival, the 2022 Hyundai Ioniq 5. Sharp turns out to be a particularly apt description of the Hyundai’s distinctly creased styling, which features the mark of Zorro on its flanks, pixelated Minecraft detailing, and a chonky stance that benefits from an uncommonly long wheelbase, with stubby overhangs and sizable wheels pushed out nearly flush with the fenders. It’s refreshing to see a unique take on the two-box crossover shape, but is there more to the Ioniq 5 than fresh-faced smart looks?

Like its chief rivals, the Ioniq 5 comes in a single-motor rear-drive configuration or a dual-motor all-wheel-drive layout. At launch, all flavors of the Ioniq 5 will be equipped with an extended-range lithium-ion battery that packs 77.4 kilowatt-hours of gross capacity. (Hyundai has yet to disclose the usable capacity, which is what we normally report, so for now we’ll estimate that at 70.0 kilowatt-hours.) In rear-drive guise, the Ioniq 5 gets 225 horsepower, 258 pound-feet of torque, and a healthy 303 miles of range, along with an EPA-estimated combined fuel economy of 114 MPGe. The all-wheel-drive varieties deliver a respectable 256 miles of EPA range, a combined output of 320 horsepower and 446 pound-feet of torque, and an EPA combined score of 98 MPGe. 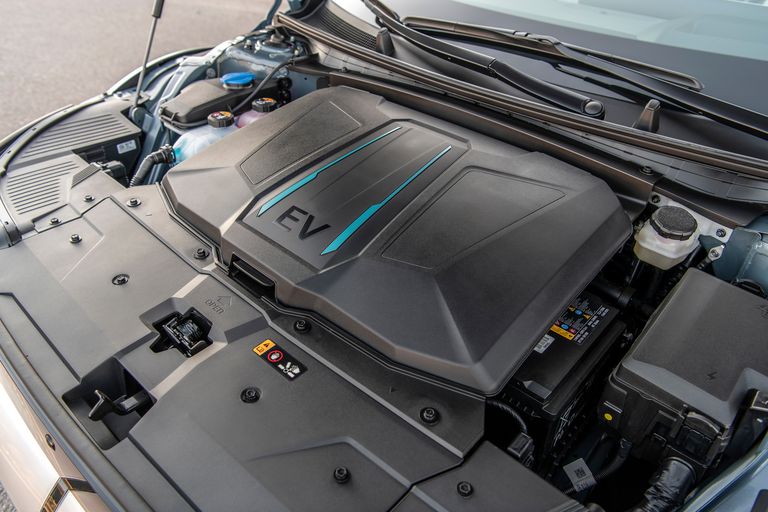 Four drive modes are offered: Eco, Normal, Sport, and Snow, all of which tweak the dials on throttle sensitivity and predicted range. Eco seems perfectly acceptable for routine driving, but it does dull air-conditioning performance. Normal makes for the better choice if speeds or temperatures are a bit higher. Steering-mounted “shift” paddles adjust the strength of the regenerative braking through five steps: none, 1 through 3, and i-Pedal. The latter setting is much more aggressive (and suitable for mountain-road hijinks) than anything seen on the Kona EV, and it’s robust enough to bring the Ioniq 5 to a full stop without having to touch the brake pedal. Punch the accelerator in Sport mode and there’s enough seamless thrust to believe Hyundai’s claimed sub-5.0-second 60-mph time for the all-wheel-drive version. 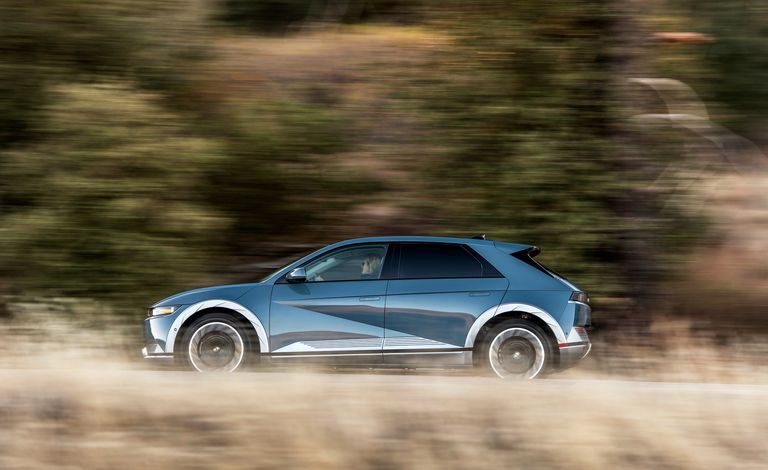 But the speed that really matters is the time it takes to inject juice into the batteries. Here the Ioniq 5 reigns supreme compared to all of its competition, save the related Kia EV6. Its 697-volt battery pack and 350-kW DC fast-charging capability have no equal this side of the vastly more expensive Porsche Taycan, Audi E-Tron GT, or Lucid Air. This Hyundai absolutely gets with the program at one of Electrify America’s top-tier 350-kW charge stalls, where it takes just 18 minutes to charge the battery from 10 percent to 80 percent. At home, its 10.9-kW on-board charger works with 240-volt equipment to refill a dead battery in 8.5 hours. But no one drives their personal EV down to zero, so Hyundai’s estimate of just under seven hours for an overnight top-up from 10 percent seems more relevant.

The Ioniq 5’s strut front and multilink rear suspension is calibrated for a smooth ride. A Limited fitted with 20-inch wheels shod with 255/45R-20 tires readily smothered all manner of rough pavement and undulating asphalt, with no undue harshness or head-toss. This suspension is pleasantly limber, though its compliance might just teeter on the edge of excess for those that prefer a firm, tied-down ride. None of this prevents the Ioniq 5 from taking a tenacious set through bends, where its wide-for-an-EV tires and low-slung battery pack help it feel stable and planted. The trouble comes from the lack of feel and feedback transmitted through the steering wheel itself, which tends to mask the buildup of forces and make the Ioniq 5 feel less responsive than it really is. 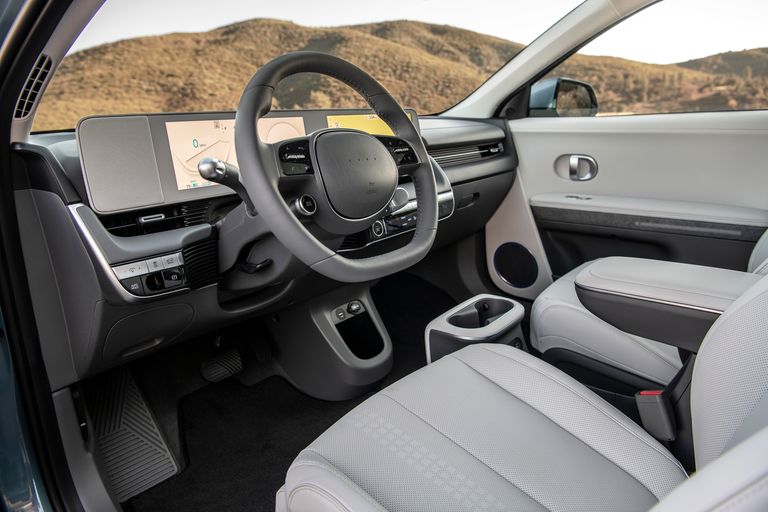 Inside, that steering wheel juts from a dashboard that possesses all the charm of an open-office floorplan. Two identical 12.3-inch screens are positioned side by side, creating the impression of a dual-desktop-monitor setup. If you’re thinking the interior is nowhere near as inspiring as the exterior, you’re onto something. For all that, the various controls are laid out quite logically, and it’s easy to glance about and decipher what everything does. Apple CarPlay and Android Auto are present, but the lack of wireless capability stands out because the console’s distance from the dash makes cords hard to wrangle. That said, the Bose premium audio system proved to be fantastic, breathing life into a favorite Spotify playlist that rarely sounds this crisp and distinct. The hushed ambient noise of the EV powertrain might be helping the cause there.

Front headroom and legroom are abundant, but the steering wheel could stand to extend another inch so taller drivers could fully exploit the available seat travel. Those in back enjoy 39.4 inches of rear legroom, which is some 1.3 inches more than the Mach-E and 1.8 inches better than the ID.4. Credit the 118.1-inch wheelbase—longer than anything else in the Hyundai lineup, including the Palisade three-row SUV—for that. Farther back, that extra rear-seat legroom takes a bite out of seats-up cargo space. The Hyundai’s 27 cubic feet trails the others, which straddle either side of 30 cubic feet. But its 59 cubic feet with seats down nearly ties the Mach-E, even though the VW pips them both. Up front, Ioniq 5’s cursory frunk hardly seems worth the bother at just 1 cubic foot. 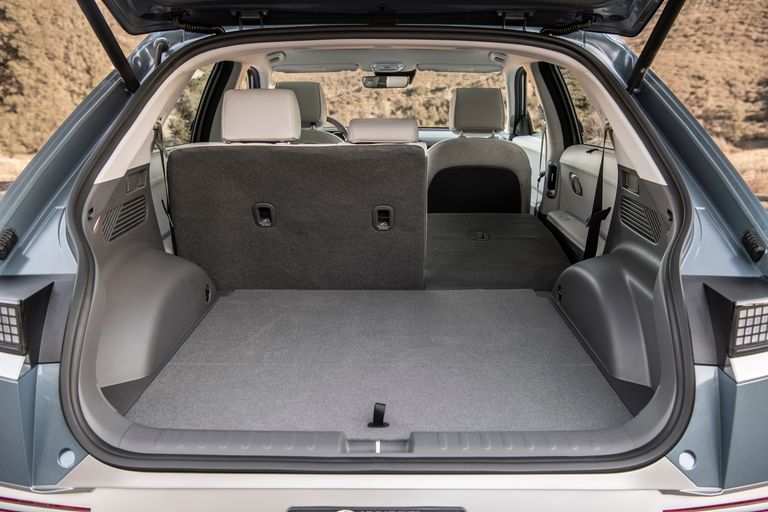 Three familiar trim levels are offered—SE, SEL, and Limited—and that choice is independent of the drive layout you select. The exception is the 168-hp, 220-mile standard-range SE RWD loss leader that’s priced at $40,925 and won’t be available for some months. Just as well, because the long-range RWD SE with 303 miles of range and 225 horsepower costs $44,875 and is heading to dealers as you read this. The all-in 320-hp Limited AWD we drove sits atop the range at $55,725. In the end, the sharp-looking 2022 Hyundai Ioniq 5 is a compelling electric SUV because it combines a goodly amount of range and uncommonly quick DC fast-charging capability with a spacious interior and a smooth ride. As the country’s charging infrastructure continues to improve, it just might be the first non-Tesla to encourage you to push the boundaries of range and charging on an electrified road trip. 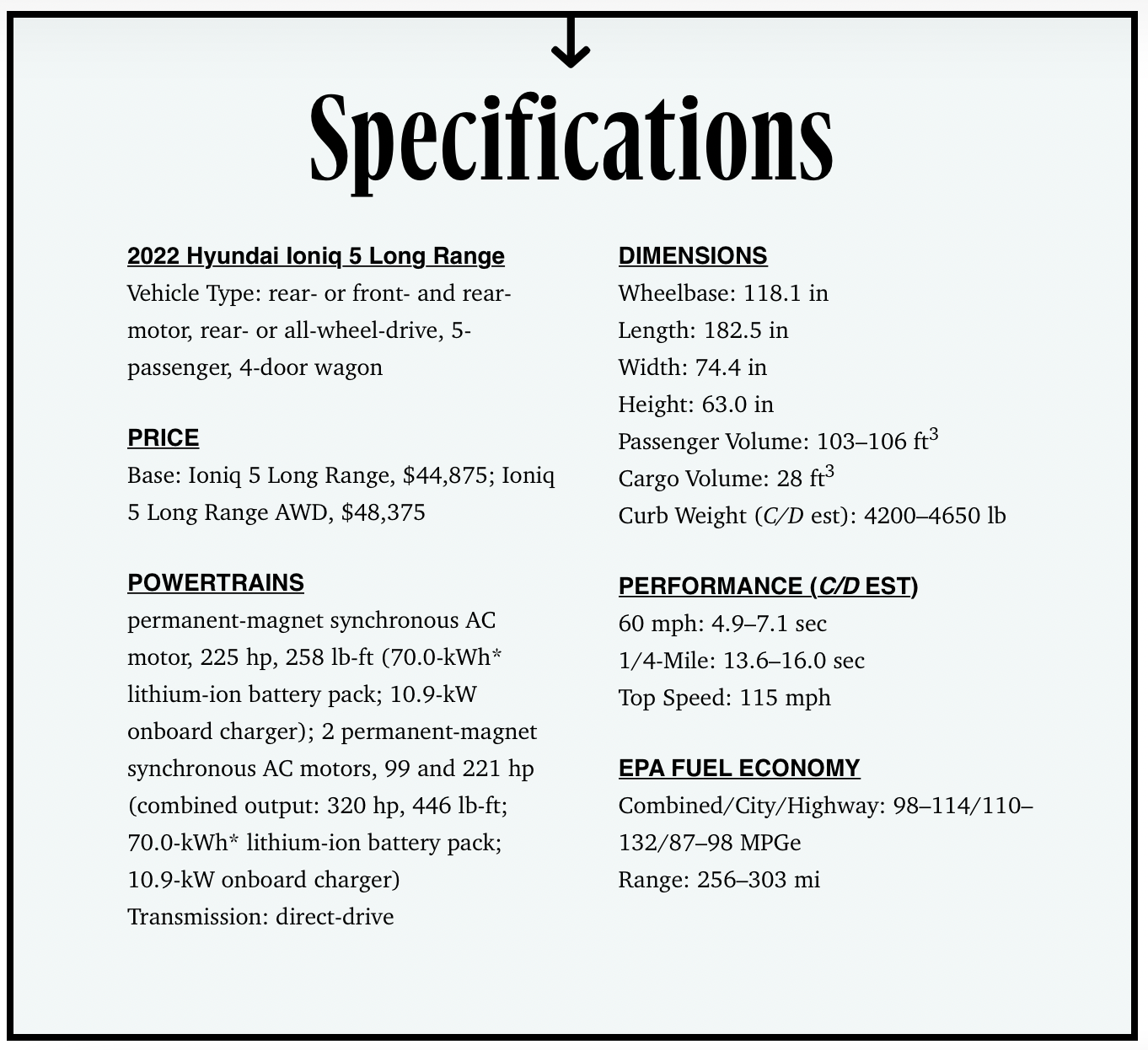