Hyundai extends its sport-compact formula to the sedan segment with its new 276-hp Elantra N.

The demise of the sedan has been highly exaggerated. True, many of today’s examples have adopted sleek, flowing rooflines, and some manufacturers have abandoned cars almost entirely. But plenty of exciting three-box four-doors have thrived into the modern age of the crossover, from wickedly powerful supersedans, like the 10Best-winning Cadillac CT5-V Blackwing, to updated versions of the Honda Civic Si and Subaru WRX. New to that list is the 2022 Hyundai Elantra N, the latest sport-compact extension of the company’s N performance subbrand.

The front-wheel-drive Elantra N falls into the no-brainer category of product development. Not to be confused with the lesser Elantra N Line—a 201-hp pepperoncini to the 276-hp habanero that is the full N version—this new model simply wraps the turbocharged goodness of the Veloster N hatchback and also-new Kona N crossover in the packaging of Hyundai’s redesigned compact sedan. This is a good thing. Our long-term 2019 Veloster N thoroughly entertained us over 40,000 miles, a mid-cycle update brought meaningful improvements to that car for the 2021 model year, and the higher-riding Kona N is a hoot in its own right, albeit lacking a manual transmission option. 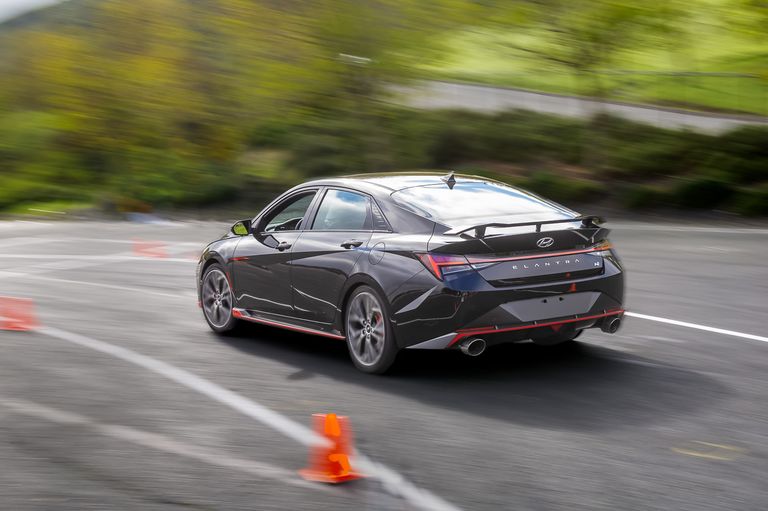 Sedans have often served as stealthier body styles compared to more extroverted hot hatches and coupes. But that’s not necessarily the case with the Elantra N, what with its red exterior accents, rear deck spoiler, and darkened model-specific grille that gives it the face of an angry catfish. Uncork the Elantra N’s active exhaust system and its 2.0-liter turbo four—mated to either a standard six-speed manual or an optional eight-speed dual-clutch automatic with launch control—emits the same popping, crackling growl that makes its siblings such aural treats to drive hard. We recommend a darker exterior color if you want to keep a low profile, though the latest Elantradoes wear N’s signature Performance Blue paint well. The ingredients for the Elantra N are mostly the same as those for its Veloster and Kona counterparts. There are numerous preset drive modes, and the 10.3-inch touchscreen allows you to configure two steering-wheel-mounted buttons with Custom settings for throttle sensitivity, steering weight, the lockup of the electronically controlled limited-slip differential, and more. Also on the wheel is a large red button for adjusting the automatic rev matching feature on manual cars or activating the automatic model’s N Grin Shift overboost feature, which unleashes 10 additional horsepower (for a total of 286) in 20-second bursts. 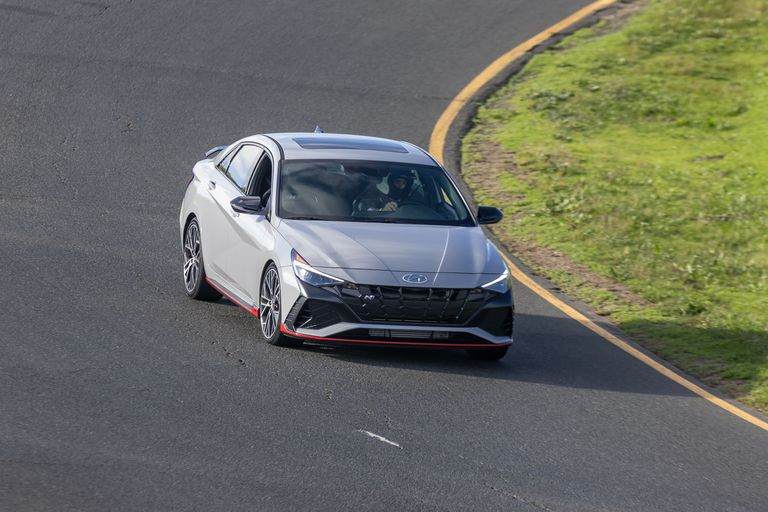 Based on Hyundai’s latest K3 compact car platform, the Elantra N shares the N Line model’s multilink rear suspension instead of the standard car’s rear torsion beam. Updates for N duty include adaptive dampers and a stiffer rear anti-roll bar, reinforced front strut towers, and a chassis brace behind the rear seats that connects the suspension’s uprights. The brakes feature larger rotors—14.2 inches in front, 12.4 inches out back—and all Elantra Ns roll on intricate 19-inch wheels shod with 245/35R-19 Michelin Pilot Sport 4S summer tires—the widest rubber yet fitted to an N car. Also model specific is a racing-inspired front-axle design that integrates the drive shafts with the wheel hub and bearing assemblies, which the company says improves rigidity and saves roughly seven pounds. Overall mass should be slightly greater than the Veloster N’s and range from 3200 to 3300 pounds, with 60-mph times coming in between 4.8 and 5.3 seconds, depending on the transmission.

Though we’ve previously driven a prototype, this was our first stint in the production car, which was primarily limited to the grounds of Northern California’s undulating Sonoma Raceway. But it only took a quick jaunt on a nearby back road to reveal that the Elantra N rides far more comfortably than the Veloster N, thanks to its newer platform and 2.8-inch longer wheelbase. While both cars offer similar levels of composure, the sedan’s firmest damper setting is comparable to the stubbier hatchback’s softest, which we’ve described as barely tolerable on less-than-perfect pavement. Unsurprisingly, the wheelbase stretch also translates to a more welcoming back seat with two full doors, nearly four additional inches of legroom, and a smidge more headroom under the sloping roofline. The attractive and supportive front seats that are shared with the hatchback also have been mounted 0.4 inch lower compared to lesser Elantras, making it easier to fit inside with a helmet on.

Despite its rather livable character, the Elantra N displays the rowdy playfulness that we’ve come to expect from the N subbrand. Though not as planted or talkative at speed as, say, a Honda Civic Type R, the Elantra N’s direct steering allows it to navigate a twisty racetrack with precision. Power out of a corner and the electronically controlled front differential limits understeer to a slight push and almost eliminates torque steer. The strong brakes are well matched to the car’s power, and the suspension has a reassuring balance, shrugging off Sonoma Raceway’s curbing yet maintaining solid body control through both fast sweepers and tighter hairpins.

The Elantra N obediently tucks into line around corners when you let off the gas, and the intervention of its three-stage stability control is fairly lenient in its more aggressive settings. The real entertainment comes in surges as you wind the engine to redline and fill the cabin with sound, from the brap of the exhaust to its augmentation through the stereo speakers. There’s even an equalizer function for tailoring the soundtrack’s volume and tone. While the automatic is surely the quicker setup—despite the additional mass it brings versus the manual—working the six-speed stick and well-positioned pedals is far more satisfying, especially with the manual’s no-lift shift feature. As with the Veloster N, the manual transmission also is the more efficient setup, earning an EPA-estimated 25 mpg combined to the dual-clutch’s 23 mpg. 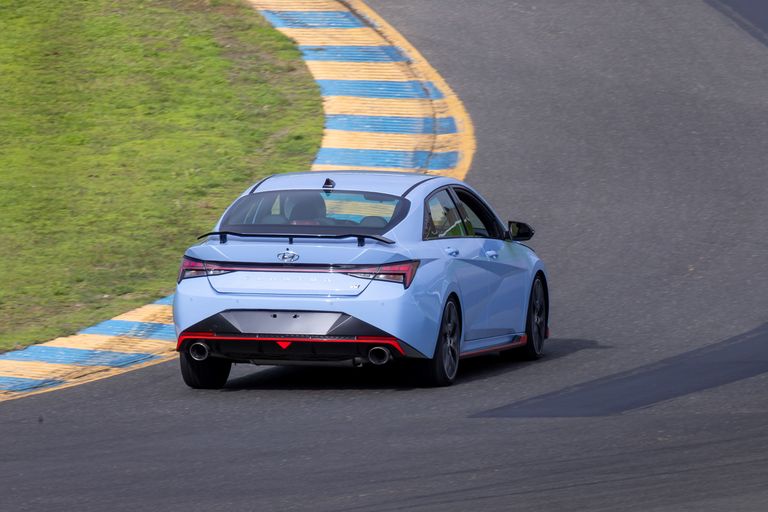 Hyundai is still coy about pricing ahead of the Elantra N’s on-sale date later this year. But we expect a base price in the low-$30,000 range, which will include an array of active safety features, the updated 10.3-inch digital gauge cluster and touchscreen interfaces, and a sunroof on cars equipped with the automatic. Aside from paint color and transmission choice, there are no options. Hyundai makes a point to emphasize entertainment over outright performance with its current N lineup, and it shows. The addition of a better-riding and more spacious sedan variant makes that fun factor even easier to enjoy. 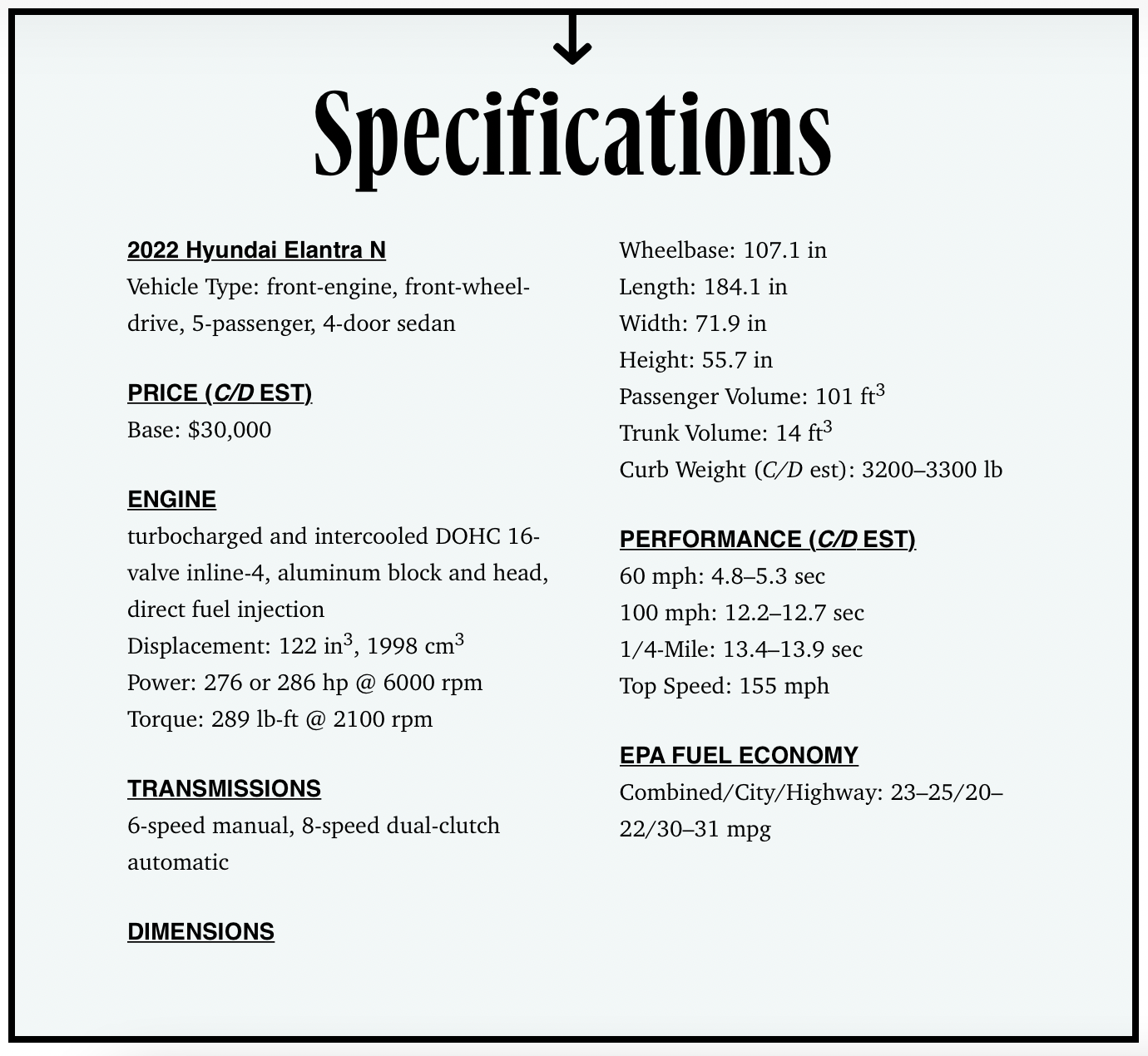