Jeep faced a fair amount of pressure to not screw up the 2021 Grand Cherokee L, the long-wheelbase, three-row debut model of its new fifth-generation mid-size SUV. (A shorter, more traditional two-row version will bow this fall.) Since its introduction for 1993, the Grand Cherokee has evolved into an SUV icon, an American Land Rover of sorts, flush with refinement and impressive off-road and towing credentials. Despite the outgoing two-row-only model having been on the market for a decade, updates have kept it feeling rather modern, and its brand-leading 209,000 sales last year weren’t far off the much newer three-row Ford Explorer’s. Maintaining that heritage and sales momentum is no trivial task. But based on our initial drives in several different configurations, Jeep seems to have hit the right marks with the new L.

With the bulk of today’s mid-size SUVs offering six- or seven-seat layouts, an upsized Grand Cherokee is hardly surprising. For the L, Jeep kept its width about the same as the previous model’s yet added 15.1 inches in length (now 204.9) and 7.0 inches to its wheelbase (121.7). Available with either second-row captain’s chairs or a 60/40 split-folding three-seat bench, depending on the model, the result is comfortable, six-footer-friendly accommodations front to rear. The middle row’s straightforward tilt-and-slide mechanism affords easy access to the L’s rearmost quarters, where there are generous levels of leg- and headroom for two adults. A solid 17 cubic feet of cargo room lies behind the L’s third row; fold it flat and that space grows to 47 cubes, or 11 more than in the outgoing Grand Cherokee. Although some competitors are more capacious still, Jeep will gladly direct you to its new full-size Wagoneer and Grand Wagoneer if you need even more space and a seven-slot grille. 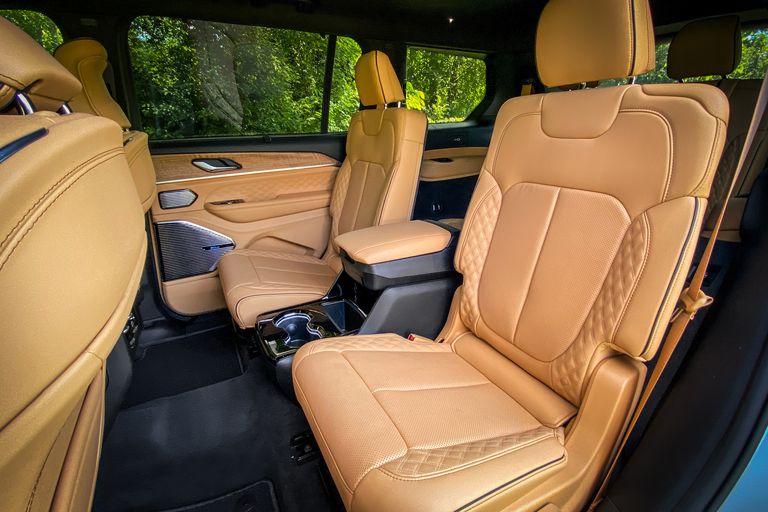 Speaking of which, the slight forward cant of the new Grand Cherokee’s snout is a nod to the Wagoneers of old. Accented by LED lighting all around, the L projects a handsome, appropriately stocky look that is immediately recognizable as a Grand Cherokee. We will say that the stretched proportions of this long-wheelbase model are exaggerated when sitting on the standard 18-inch wheels, but that visual imbalance is lessened with the optional 20- or 21-inchers. In any case, the design always looks much more cohesive than Jeep’s last attempt at a three-row SUV, the gangly Commander.

Jeep says that the Grand Cherokee L’s body helps make it significantly stiffer than its predecessor. The brand also claims this allowed it to keep curb weights roughly the same despite the L’s growth spurt. This is a good thing, as the fourth-gen Grand Cherokee was always a pretty heavy—albeit solid-feeling—thing, with acceleration that’s more deliberate than spirited, at least in non-SRT-tuned versions. Given that the available powertrains—293-hp 3.6-liter V-6 or 357-hp 5.7-liter V-8 lashed to a ZF eight-speed automatic transmission—carry over, the 4550-to-5300-pound L feels much the same getting underway. 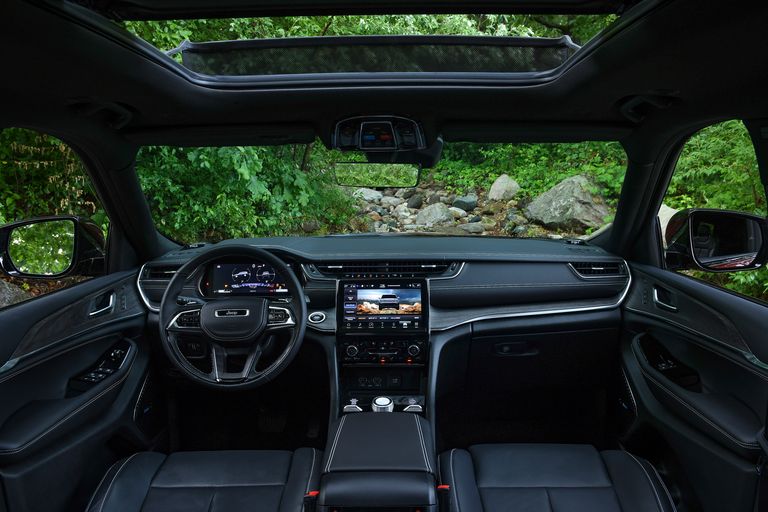 As before, the V-8’s strong 390 pound-feet of torque make it our pick over the comparatively high-strung V-6, which only produces 260 pound-feet of twist and must rely more heavily on the smart programming of the eight-speed for meaningful progress. The V-8’s deeper exhaust rumble and easier-going power delivery are simply a better match for the Grand Cherokee’s upscale demeanor. Figure on a 60-mph time of just under seven seconds with the V-6. Knock a half second off that with the V-8. The larger engine also unlocks the L’s 7200-pound towing capacity, up from the V-6’s still-stout 6200 pounds. Unfortunately, the Grand Cherokee’s wide-ranging capability comes at a cost to fuel economy, with the EPA issuing the L combined estimates of 21 mpg for V-6 models and just 17 mpg for the V-8. The fourth-gen Grand Cherokee diesel earned an EPA combined score of 24 mpg, but that 3.0-liter V-6 was dropped for 2020 and doesn’t return here.

Underpinning the Grand Cherokee L are front and rear multilink suspensions. Air springs paired with adaptive dampers are optional. Competent and secure is the theme on the road, with a firm brake pedal, linear and nicely weighted steering, and decent body control. Regardless of the suspension setup, grip limits are relatively low, and the base wheels and thick-sidewall tires noticeably limit steering precision. But general control and ride comfort are good over everything but Michigan’s worst pavement, even on the 21-inch rollers. While the latest Grand Cherokee never feels as athletic as an Acura MDX or Mazda CX-9, the L maintains a sorted composure that will be familiar to drivers of the outgoing model. 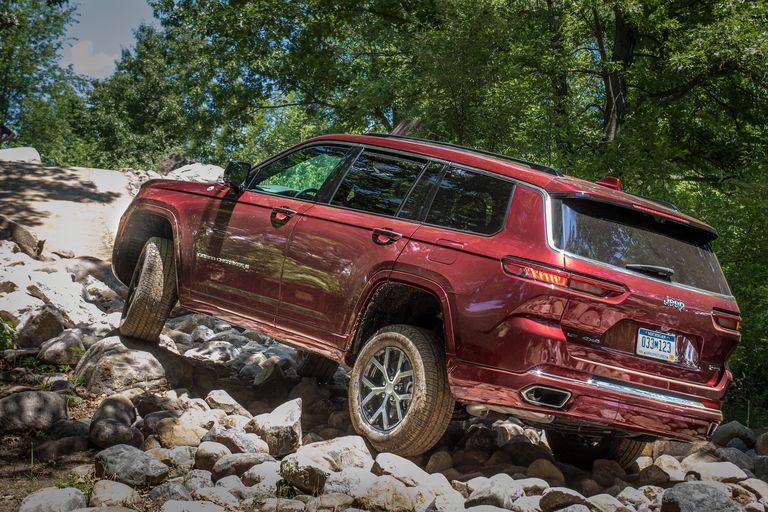 Despite the L’s increased dimensions and overall refinement, its off-road prowess also will be familiar to the Jeep faithful. This is the next most capable Jeep after the Wrangler and Gladiator, with three available all- or four-wheel-drive systems, each of which add $2000 to the cost of a standard rear-drive model. These include the single-speed Quadra-Trac I setup, Quadra-Trac II with a two-speed transfer case, and the top Quadra-Drive II system with low range and an electronically controlled limited-slip rear differential. To unlock the latter, you’ll have to spring for an Overland or Summit model, but only the Trail-Rated Overland can be further enhanced with the $1095 Off-Road Group and its underbody skid plates and 18-inch all-terrain tires. Air springs are standard on those two trims as well and can increase ground clearance from a nominal 8.3 inches to a lofty 10.9 inches. They also can drop the body nearly two inches for easier access when parked. In addition to Auto and Sport on-road drive modes, the Grand Cherokee L’s center-console selector dial also features Rock, Sand/Mud, and Snow settings.

Over the tight, undulating trails that Jeep arranged for our drive, the Overland’s setup thoroughly impressed, its front-facing camera aiding us over blind crests and its 24.0-inch fording depth making moderate water crossings a nonissue. A greater rear overhang limits the new model’s maximum departure angle to 23.6 degrees versus 27.1 for the shorter gen-four Grand Cherokee, yet its angles of approach (30.1 degrees) and breakover (22.6 degrees) are about the same. Confronted with an imposingly steep, boulder-strewn hillside that Jeep said was designed to simulate a section of the Rubicon Trail, the big L clambered up it with ease, seemingly unbothered when its suspension articulated and left a wheel hanging a couple feet in the air. To be fair, there was some undercarriage scraping and a few scratches were added to our rig’s rocker panels. But it’s clear the Grand Cherokee L has what it takes to conquer far more than the landscaping at your local strip mall. 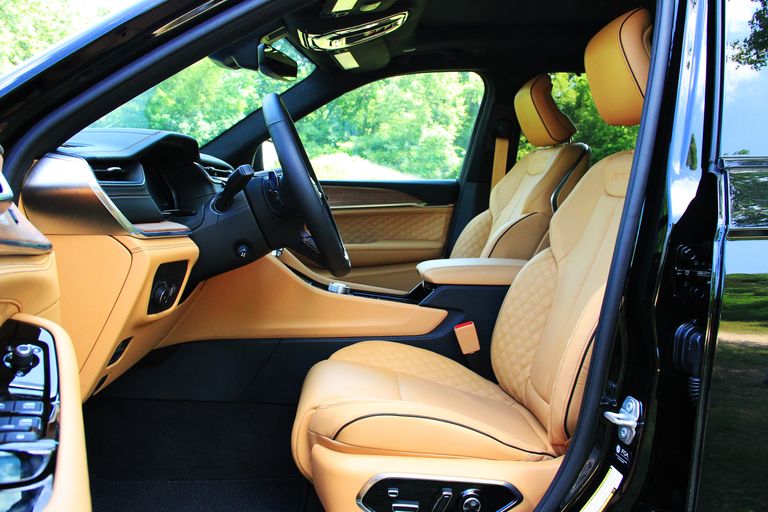 That capability is even more impressive when you consider the finery of the L’s cabin, particularly in the higher trim levels. The latest Ram pickups have illustrated the Stellantis commitment to interior quality and design, and the new Grand Cherokee continues that trend with luxurious touches such as available 16-way massaging front seats with quilted stitching, nicely integrated open-pore wood trim, and an optional 19-speaker McIntosh audio upgrade. There’s a pleasant balance to the shapes across this Jeep’s dashboard, and its ergonomics are excellent. A 10.3-inch digital instrument cluster is standard, and the base 8.4-inch center touchscreen can be upgraded to a 10.1-inch unit, both of which run the latest responsive and highly customizable Uconnect 5 infotainment suite. On the active-safety front, almost every advanced driver aid on the market is standard, with only a head-up display, a night-vision camera, and few minor add-ons limited to options on certain models.

Jeep will add even more tech later this year with an enhanced driver monitoring and assistance system that will expand the Grand Cherokee L’s hands-free cruising ability. That addition likely won’t drastically alter its broad price range, which begins with the $38,690 rear-drive Laredo model and can top $70,000 for a fully optioned Summit Reserve. Also coming this fall will be a 4xe plug-in hybrid model. And we’ll be shocked if Jeep doesn’t eventually revive the harder-core Trailhawkand fire-breathing SRT models, although probably only for the upcoming two-row version. But even in its more accommodating three-row form, the L model upholds the polished, ultra-capable reputation that the Grand Cherokee has cultivated over the years.