With 480 horsepower and sharper handling, Ford’s new performance-oriented electric SUV brings some of the entertainment we expect from a Mustang.

Look past the 2021 Ford Mustang Mach-E’s tenuous connection to the brand’s traditional pony cars and you’ll find a very compelling electric vehicle—one good enough that it earned Car and Driver’s first ever EV of the Year award. But the Mustang badge that it wears conjures images of powerful, speed-addled thrills. The Mach-E simply struggles to deliver those in its lower states of tune, which top out at a mere 346 horsepower. For the Blue Oval’s electric SUV to approach the level of excitement expected from Ford’s galloping pony, you’ll need to step up to this Mach-E, the new performance-oriented GT model with its herd of additional horses.

An abundance of power has been a defining trait of Ford’s best Mustang models over the years. While the Mach-E GT’s all-wheel-drive layout means that tire-smoking burnouts are off the table, its combined pony count does climb to a stout 480 horsepower, thanks to a more powerful motor on its front axle (its rear unit is shared with lesser models). That’s more than enough grunt to startle unsuspecting passengers and draw the attention of roadside tax collectors. Aided by 600 pound-feet of torque, it’s also enough to get the GT to 60 mph in a claimed 3.8 seconds, which is more than a second quicker than we’ve recorded for a non-GT version and as rapid as the last 526-hp Mustang Shelby GT350R we tested. Opting for the GT Performance Edition—a $5000 package atop the $61,000 base GT—adds an extra 34 pound-feet of twist and drops the factory-stated zero-to-60 figure to 3.5 seconds. For reference, a 470-hp 2020 Tesla Model Y Dual Motor Performance, which starts at $62,400, needed 3.6 seconds to reach 60 mph in our testing. 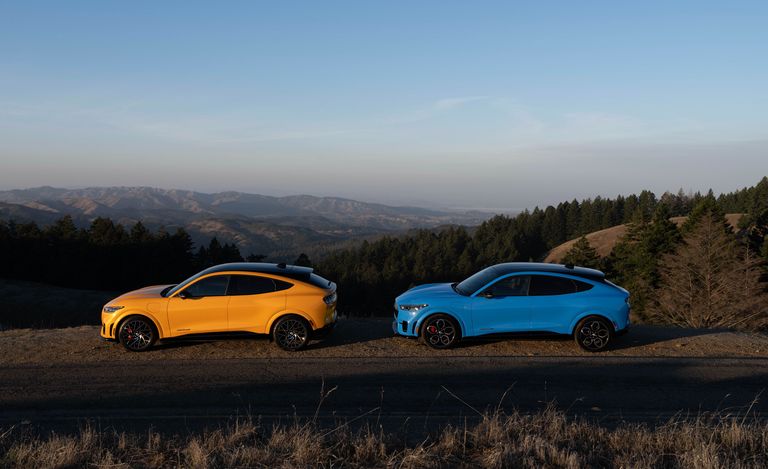 Providing the electrons to the GT’s motors is the larger 88.0-kWh Extended Range battery, which is optional on non-GT models. For the 2022 model year, recalibrated energy management programming will increase the pack’s usable capacity by 3 percent, boosting its storage to 91.0 kWh. (Likewise, 2022 Mach-Es with the standard battery will sport 70.0 kWh of capacity, up from the current 68.0.) Ford says these gains will not alter the car’s quoted range, which is estimated at a respectable 270 miles for the regular GT and 260 for the GT Performance Edition. 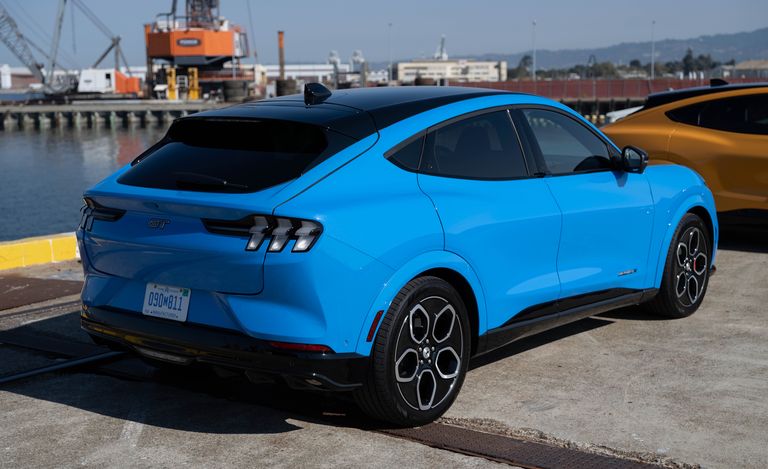 Mat the accelerator and the GT delivers the instant, neck-snapping thrust that the Mach-E’s Mustang-inspired design promises, quickly erasing short straights on California’s Pacific Coast Highway north of San Francisco. It’s difficult to notice the Performance Edition’s extra torque over the standard GT’s, but its stickier tires and upgraded dampers reveal more of the Mach-E’s handling potential. Carry too much speed into a sharp corner and the girth of this relatively tall, heavy crossover is evident, but its overall balance is pleasantly neutral and provides impressive agility and body control.

Although you can activate a one-pedal drive setting with maximum brake regeneration via a tap of the 15.5-inch center touchscreen, the more aggressive Unbridled drive mode (there also are tamer Whisper and Engaged settings) brings a decent amount of standard regen while also sharpening the drivetrain’s responses and upping the steering effort. Ride quality is taut but never harsh in this mode and downright comfy by default, even over the few broken sections of pavement we could find. The regular GT with its passive dampers manages most bumps with a similar smoothness, although we did notice some uncouth hobbyhorse motions over large frequency undulations, such as those you might encounter between pavement seams on the highway. As you’d expect, it’s far easier to overdrive the GT when it’s fitted with all-seasons, as those tires can quickly lose purchase when you abruptly unleash 600 pound-feet of torque accelerating out of a tight bend.

Unique to GT models is a new Unbridled Extend mode, which is designed to provide sustained performance over longer runs by optimizing the battery’s thermal management and setting all of its chassis systems to full attack. In this mode, the brakes become more responsive and devoid of regen, the steering gets more linear, and the volume of the love-it-or-don’t powertrain synthesizer that plays through the stereo speakers increases slightly (it can be turned off if you prefer near silence). The front-to-rear power split also becomes rear biased, going from 50/50 to 40/60, and the thresholds for traction and stability control intervention are relaxed. More important, those driver aids can now be fully deactivated via a button next to the headlight controls—a feature that Mach-Es have previously lacked. It will be added to all models for the 2022 model year.

Aided by the GT’s precise steering, stable platform, and deep well of torque, Unbridled Extend made the Performance Edition a hoot to fling around a maze of cones set up in an abandoned parking lot. Ford prevented us from turning off the car’s safety nets and sliding around the course’s hairpins with abandon, but we still had enough fun that we didn’t mind the lack of fire and brimstone under the hood, at least for a moment. If anything, pushing the GT’s limits revealed that the Mach-E’s chassis could handle even more rubber underneath it, although larger tires surely would sap some of its range.

There are caveats, though: Unbridled Extend prioritizes consistency over outright power, meaning straight-line thrust is less than in the normal Unbridled setting. And it has very strict activation requirements related to heat and current flowing in and out of the battery, so you’ll need to engage it on startup or after the car has sat and cooled off for a bit. We also learned that the Performance Edition’s seats, while otherwise nicely supportive, could work better still at holding the pilot in place during high-g maneuvers.

Given the GT’s greater power and poise versus lesser Mach-Es, its upcharge—nearly $10K more than a Premium all-wheel-drive model with similar equipment and the same range—seems reasonable. Compared to the slightly more expensive Tesla Model Y Performance, it’s better built and far more engaging to operate. As a Mustang, the Mach-E is still earning its place among that nameplate’s storied history. But the GT does prove that, with enough horsepower and handling hardware, even a quiet, accommodating crossover can excite a pony car enthusiast’s grey matter. 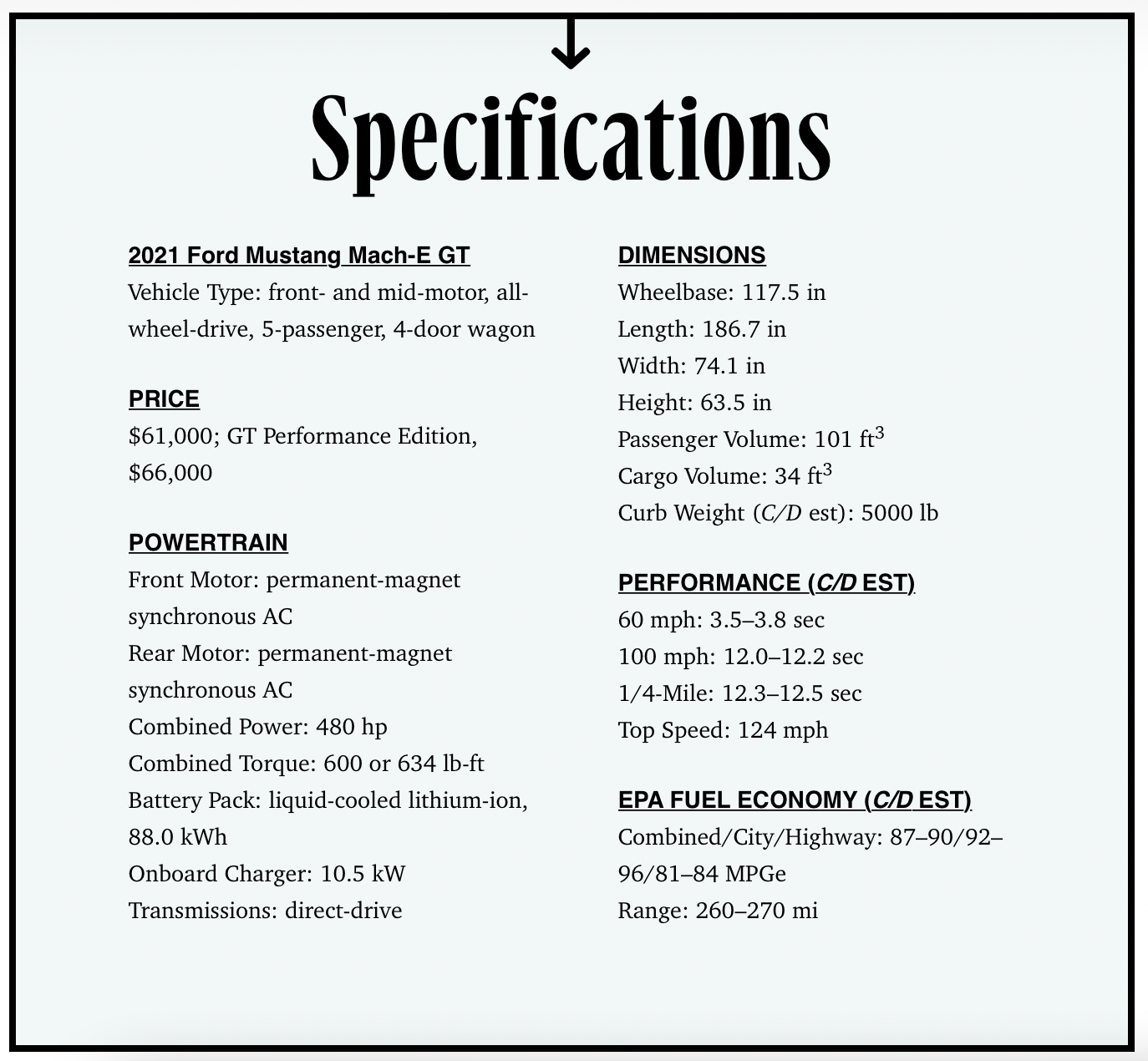