The 5001-pound crossover reaches 60 mph in 3.7 seconds, but quickly runs out of steam and is actually slower to 110 mph than a non-GT model.

Ford added the GT model to the Mustang Mach-E electric crossover to provide a more engaging driving experience and give it more of a reason to wear the Mustang badge. It claims that the Mustang Mach-E GT Performance Edition—that’s the one with 34 additional pound-feet of torque, summer tires, and magnetorheological dampers—will reach 60 mph in 3.5 seconds, which would put it close to the 760-hp Shelby GT500. It says the standard GT will hit 60 in 3.8 seconds. In our testing, however, the Performance Edition was closer to Ford’s claim for the standard GT, requiring 3.7 seconds to reach that mark, and it was 0.9 seconds quicker through the quarter mile than the non-GT model, though we recorded a slower trap speed. This isn’t exactly the performance we’d expect from a GT. 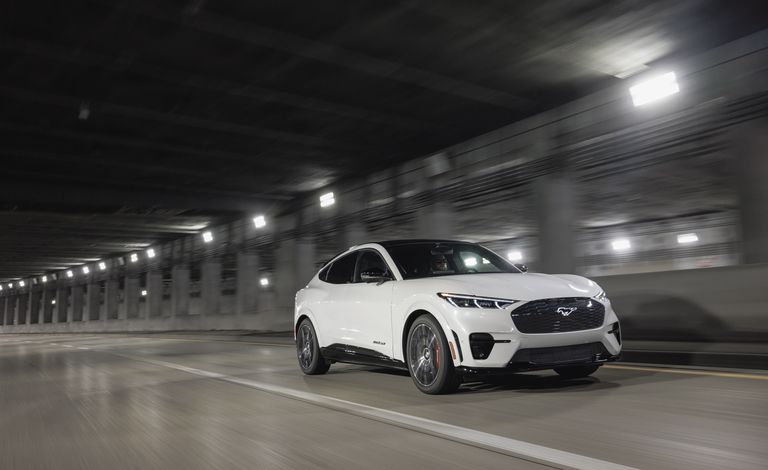 During our acceleration runs at the test track we noticed that, via a digital power and regen gauge displayed on the gauge cluster, the car was starting to limit power around 80 mph, which explains the GT’s 2-mph lower trap speed. It also requires an additional 2.1 seconds to reach 110 mph compared to the next-step-down model we tested, an all-wheel-drive variant with the larger battery pack. We asked Ford why, and a spokesperson said that “the car is performing as expected” and reminded us that the “GT was designed around everyday usable performance for fun, not drag-strip duels or lap times.” That’s a rather strange cop-out on a car that has an Unbridled Extended drive mode that’s for track use only.

We’re not saying that the 5001-pound crossover’s sub-4.0-second 60-mph time is something to scoff at, as it’s 1.2 seconds quicker than the non-GT all-wheel-drive model we tested, but it’s 0.1 slower than the Tesla Model Y Performance, which Ford was clearly targeting with the GT. And the Tesla doesn’t limit power during hard acceleration runs, so it smokes the Mach-E GT in the quarter mile; by 0.6 second and 12 mph. The GT Performance canters through in 12.7 seconds at 101 mph.

The Mustang Mach-E GT Performance Edition is equipped with an 88.0-kWh lithium-ion battery pack (also available on the standard Mustang Mach-E) and two electric motors, one on each axle, providing 480 horsepower and 634 pound-feet of torque and all-wheel drive. Standard Mach-E GTs make do with the same power but only 600 pound-feet. The EPA estimates the GT Performance at 260 miles of driving range, though we travelled 220 miles in our real-world 75-mph highway test.

The Mustang Mach-E GT’s acceleration results weren’t the only disappointing factor in our test of a car wearing the GT badge. Our test car was equipped with Pirelli P Zero PZ4 Elect tires and magnetorheological dampers, but it recorded a not-great 0.92 g of lateral grip on the skidpad, 0.02 g off the Model Y Performance. And the GT Performance required 158 feet to stop from 70 mph, again just shy of the Model Y. But it did outbrake the Tesla from 100 mph.

You can get a 2021 Mustang Mach-E GT Performance for $66,000, but after taking one to the test track, we’d say that price is a tough sell. The Tesla Model Y Performance might not have as nice an interior and looks as the Ford, but it’s cheaper, starting at $65,190, and quicker.