The Multistrada is the first bike to offer both adaptive cruise control and blind-spot warning.

The 2021 Ducati Multistrada V4 S is arguably the most technologically advanced motorcycle available today. Not only is it a fast 170-horsepower canyon carver, it’s also an ultra-comfortable road trip machine and around-town rig. Adventure motorcycles are typically pretty good at most tasks, but the new Multistrada takes that to a new level with several world-first (for a bike) safety features.

The two biggest changes from the old Multistrada 1260 to the new version are the transition to the bike’s first V4, plus the fact that it’s the first Ducati without desmodromic valves since Fabio Taglioni introduced the tech to the brand in the 1950s. The move to a standard valvetrain increases the Multi’s service intervals, which are now among the longest in the industry.

The Ducati V4 is a technological masterpiece that offers huge power, delivered smoothly and without drama. The Multistrada’s counter-rotating crankshaft has a lot to do with that effortlessness, also with making the bike feel more nimble, because it counteracts the gyroscopic effect of the bike’s spinning wheels.

The Multistrada V4 S produces a very healthy 170 hp at 10,500 rpm and 92 pound-feet of torque at 8,750 rpm. That power is sent through a six-speed sequential transmission with a built-in up-and-down quickshifter, allowing for clutchless shifting. The clutch is a wet multiplate unit and is actuated hydraulically. Like all Ducatis, the Multistrada uses a chain final drive. My test bike has the optional titanium and carbon fiber Akrapovic sports exhaust, though I don’t find the Duc V4 to be a particularly sweet-sounding engine, even uncorked. 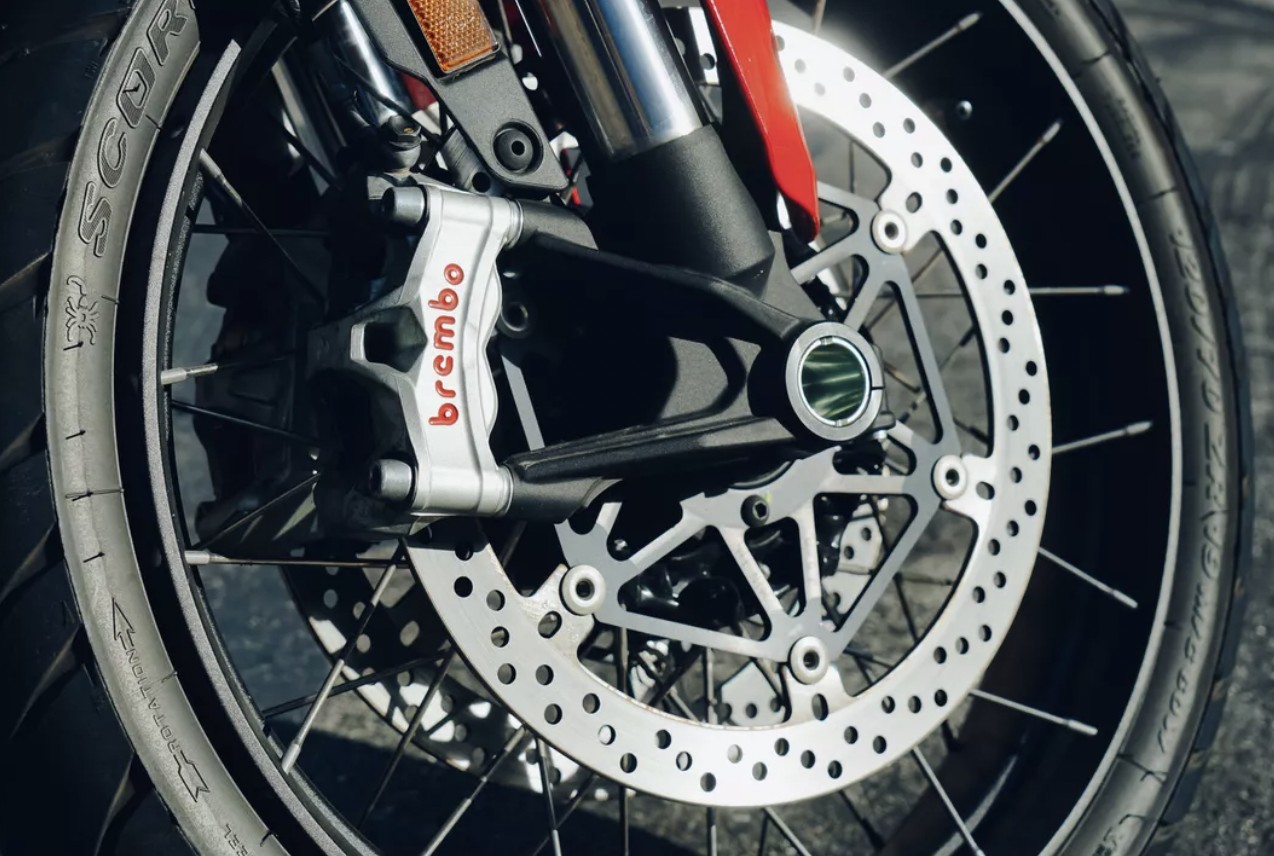 While the drivetrain is brilliant, the Multi’s real technological brilliance is found in the chassis. This is most obvious with the S model’s Marzocchi Skyhook electronically adjustable semi-active suspension. The system is not only configurable for the type of riding you want to do, but also for what kind of load you have on the bike. The best part is that it all feels transparent. The suspension adjusts itself quickly and all you really notice is that the bike handles sharply and has a comfortable ride, even over bad pavement.

That sharp handling makes the Multistrada V4 as much of an on-road weapon as this Ducati has ever been and then some. Adventure bikes in general are typically better than you might expect on a fast canyon road, but the Multi is on another level entirely. The adaptive suspension and commanding riding position make the bike a cinch to pour into a turn and, thanks to the bike’s relatively high ground clearance, you’re not going to scrape footpegs unless you’re going full MotoGP in the corners.

The Multi’s braking system comes from Brembo and features dual 320-millimeter rotors and M50 Stylema four-piston calipers up front, and a single 265-millimeter disc out back with a two-piston caliper. ABS is standard and thanks to the Multistrada’s sophisticated electronics package, it’s lean sensitive. The rear ABS is defeatable for off-road use, too. As with most modern Ducatis, the braking system here is top-notch. The feel at the lever is excellent thanks to a radial master cylinder and radially mounted calipers. The ABS isn’t overly intrusive even in its more sensitive modes, which is great for rider confidence. The bike has an inertial measurement unit on board, which adds lean-sensitivity to the traction control, as well. 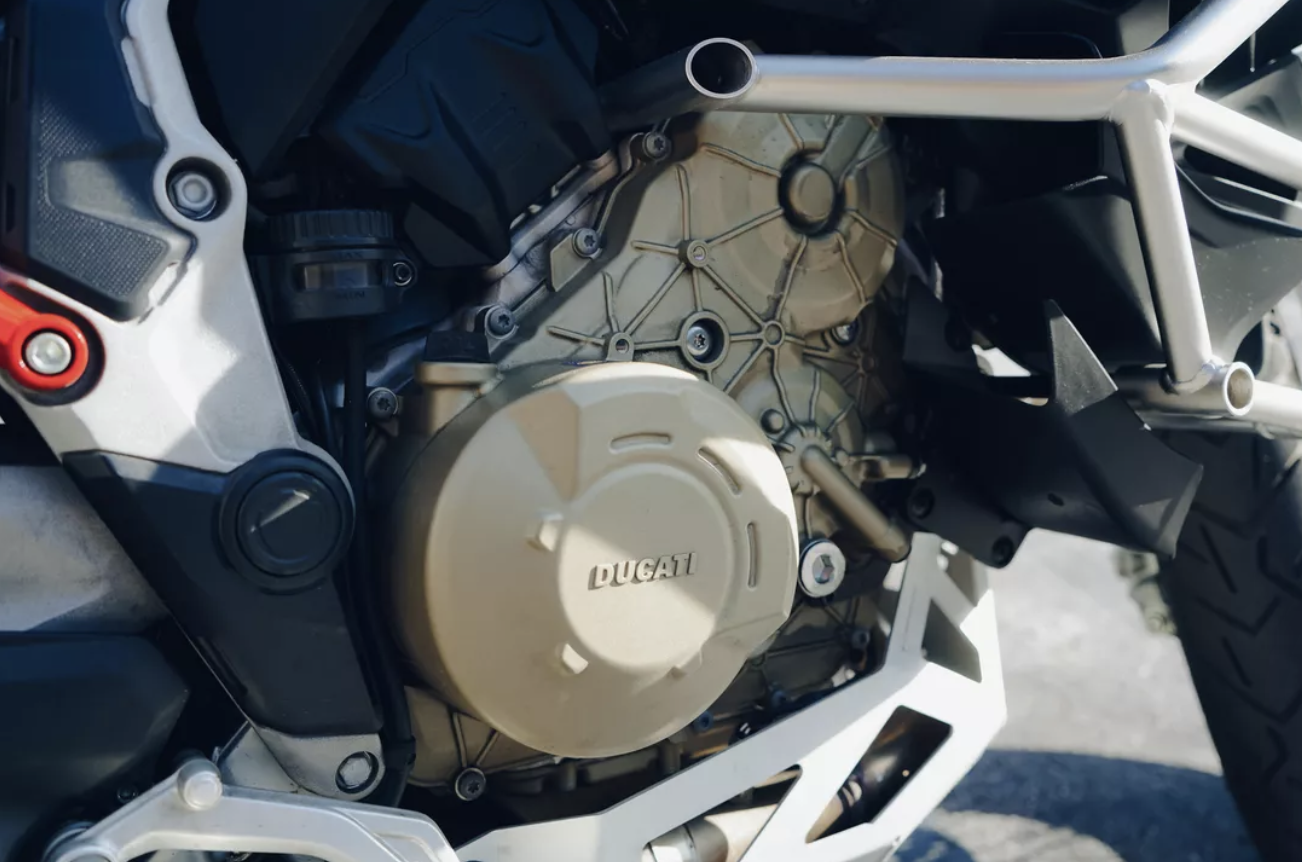 The adaptive cruise control definitely takes a little getting used to and some building of trust until you realize it won’t do anything weird or dangerous. This tech makes freeway riding in particular a total breeze and I can’t wait until more motorcycles offer this. The blind-spot monitoring system is very cleanly integrated into the bike’s rearview mirrors and works brilliantly. I quickly got used to having this safety net and even though I am religious about head-checking before I change lanes, the added security is incredibly welcome.

The rest of the Multi’s electronics suite is highly configurable and relatively easily to navigate. The color TFT dash is extremely legible in all lighting conditions and the controls on the left-hand grip are easy to figure out without having to resort to a manual or Google. Ducati has really come to lead the pack — along with Aprilia, when it comes to the electronics and their user interface — and the Multi’s setup continues this.

Being a high-end adventure bike, you’d expect there to be a ton of creature comforts featured as standard and there you won’t be disappointed. In addition to heated grips, Ducati also includes a heated seat for both rider and passenger. There’s also a nice windscreen that is easily adjustable on the fly. It’s not electronically adjustable, but that’s not common in this class of motorcycle, so I’ll give it a pass.

As with any adventure motorcycle, Ducati has a ton of factory accessories for the Multistrada. The most notable of which — and likely the most useful — is the factory luggage. Unlike with some other brands like BMW or even Triumph, Ducati doesn’t offer metal bags for the Multi, but the plastic side cases should fit more snugly than most metal ones would and they’re lighter, too. The downside is that they’re going to be more susceptible to damage should the bike go down. Ducati also sells some super choice $2,000 wire-spoked wheels which not only look rad, but should prove a bit more stout should you spend much time off-road.

Of course, as with any bike in this category, the elephant in the room is cost and there’s no way around the fact that this Ducati is a very pricey motorcycle. The Multistrada V4 S starts at a fairly eye-watering $24,095, including a set of plastic side luggage, adaptive cruise and blind-spot monitoring. My test bike has a sticker price of $29,295 thanks to its spoked wheels and a couple of equipment packages.

Normally, with a motorcycle that costs nearly $30,000, I want to balk at recommending it because the odds are good that there are other bikes that can do something similar for less money. That’s not the case here. There aren’t any other bikes that can do what the Multi does and if you’re going to have just one motorcycle and can pay the asking price, you will not be disappointed in the 2021 Ducati Multistrada V4 S.