Bentley has already said that its future will be fully electric as soon as 2030. But the British brand’s first electrified product, the new Bentayga hybrid SUV, is a rather small first step toward that goal, one that smoothly combines a modest amount of electric power and range with a turbocharged V-6 that runs on old-fashioned liquid hydrocarbons.

Despite its name, the Bentayga hybrid is actually a plug-in. It employs a 335-hp turbocharged 3.0-liter V-6 with a 126-hp electric motor sandwiched between the engine and an eight-speed automatic transmission. Combined output is 443 horsepower and 516 pound-feet of torque. In the Bentayga’s EV-only mode, the powertrain can decouple the V-6 to power the car by electrons alone, although it won’t be able to do so for very long: The EPA range in EV mode is just 18 miles, with a combined estimate of 46 MPGe. 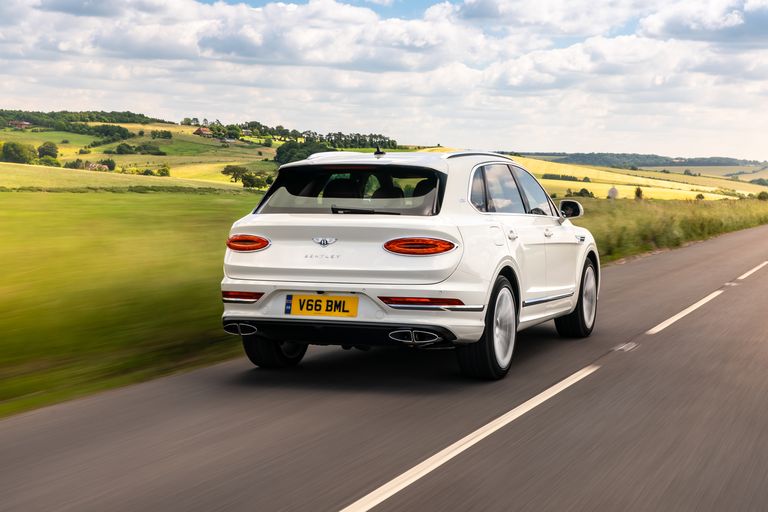 While related to the powertrain in the Audi Q7 and Q8 TFSI 60 e quattro models that are sold in other markets, Bentley’s version lacks the ability to fully recharge its 13.0-kWh battery on the move. Once the pack is depleted the Bentayga effectively becomes a conventional hybrid, and the company says sufficient charge is always maintained to allow for full performance when needed. The hybrid also includes a Hold mode that keeps the battery charged for later use. But buyers will need to be diligent about plugging in to realize any benefit from the added electrons.

The regular Bentayga is no lightweight, and the additional mass of the hybrid’s 463-pound battery beneath its cargo floor should make it the heaviest setup at an estimated 6000 pounds. Unsurprisingly, it also should be the least swift, as we’re predicting a 4.5-second 60-mph time. For reference, the next-rung-up V-8 model gets to 60 in a mere 3.3 seconds. Bentley says the hybrid is good for 158 mph. 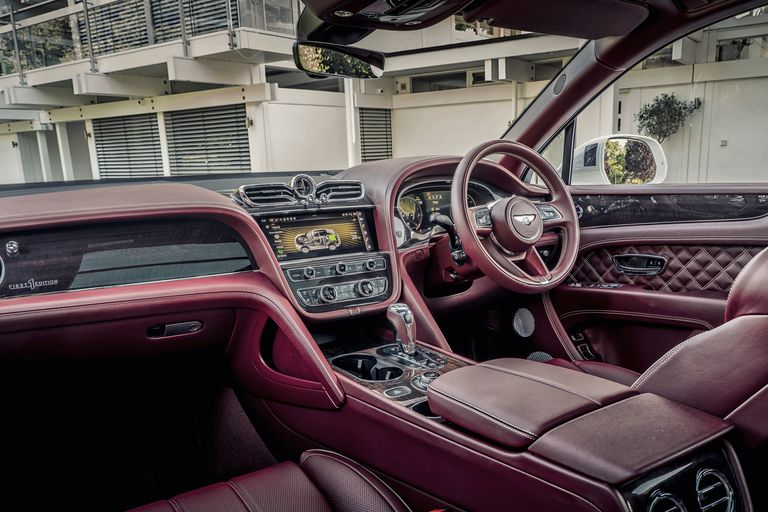 The hybrid’s visual changes versus the V-8- and W-12-powered versions are limited. There are small Hybrid badges on the doors, plus a charge port on the left rear fender. Inside, an electric drive mode switch has been integrated into the center console, and the driver information displays incorporate new readouts for the powertrain’s status. Overall finish is as sumptuous as in any other Bentayga, especially in the full-bells-and-whistles First Edition version that we drove in England.

As you’d expect, the hybrid moves leisurely in its electric mode. There is also the strange sensation of the transmission changing gears. Acceleration feels respectable at urban speeds, but it would take a lot of road and patience to confirm the EV Drive mode’s claimed 84-mph top speed. The accelerator has a haptic function that stiffens the pedal’s movement to indicate when the electric motor is giving its all, but it is easy to press beyond this (and summon the V-6 to life) when trying to merge into faster-moving traffic.

Hybrid mode makes smarter use of the powertrain’s electric assistance, although you do have to selected it every time the car starts in its default EV setting. In Hybrid mode, the Bentayga still prioritizes running under electric power at lower speeds as long as the battery is sufficiently charged, yet it starts the gas engine whenever more speed is required. This isn’t an instantaneous process; it takes around a second from requesting full acceleration for the engine to fire and start pulling. But at the more casual pace that better suits this luxury SUV, the engine cuts in and out almost imperceptibly and, once both sides of the powertrain are pulling, straight-line performance feels strong. The V-6 is appropriately muted at lower speeds but emits a muscular hum when worked toward its 6500-rpm redline. Although the Bentayga hybrid does recuperate energy via regenerative braking, it’s a behind-the-scenes affair that results in very gentle slowing when you let off the accelerator in the Bentley and Comfort drive modes. 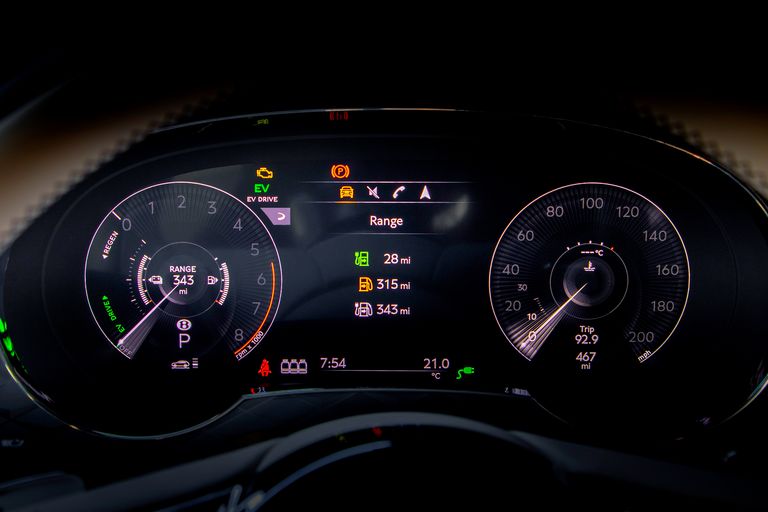 The Bentayga’s standard air springs coped well with the hybrid’s extra mass over southern England’s undulating roads, delivering a comfortable yet controlled ride. Lacking the 48-volt active anti-roll bars available in sportier Bentaygas, the hybrid leans a bit under moderate cornering loads, and the light, numb steering gives little encouragement to push hard down twisty two-lanes. Combined with its exemplary cabin refinement, this Bentley is far happier cruising than carving corners. Yet it is hard to ignore the performance potential of an electrified powertrain. Witness the Porsche Cayenne Turbo S E-Hybrid—a 5623-pound hulk of an SUV that can get to 60 mph in 3.2 seconds—and we soon expect to see even more powerful V-8 hybrids from Mercedes-AMG.

In the real world, we doubt many buyers will be choosing Bentley’s first hybrid to reduce their fuel bills. (As we’ve previously reported, the V-8 model earns better EPA numbers at highway speeds.) But what the Bentayga hybrid—and the 536-hp Flying Spur hybrid sedan that will follow it later this year—does show, on behalf of both the company and the likely small cohort of customers who will be drawn to it, is a willingness to change. Every journey has to begin with a first step.